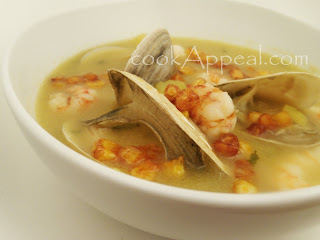 I have been wanting to try something I saw on a menu in a local restaurant a while back. A corn chowder seasoned with lemon grass. A bowl of fusion to say the least, and it was so simple. No garnish. Just a bowl of warm yummy ingredients pureed for my pleasure, with some fresh baked bread. Of course I could not just serve up my hubby a pureed soup, or leave my memory of this soup alone. He likes his with a little more substance, so with the addition of some seafood, cubed potatoes, and kicked up flavor would make it more his style.

With this soup still in the back of my mind; driving past so many corn fields this past summer, and a little serendipity brought a post and stepped up my soup idea. Tipper @ Blind Pig & The Acorn who writes about her own Appalachian heritage had written about how corn is gathered and parched for milling and storage through the winter. This could be a story tied into my soup idea! 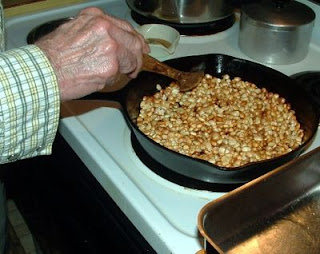 Tipper wrote about eating parched corn as a snack- “You can see the finished product-parched corn. It was pretty good; it tasted like popcorn kernels to me. Some kernels were easy to chew up, somewhere impossible. Pap said the corn they grew when he was a child made better parched corn than what we had to work with. I can see why folks would like it, and even crave it. Think of a world where there were no potato chips, cheetos or corn chips. Parched corn would fill the slot for a salty crunchy snack”.

Yes, there it is...parched corn would work as a garnish for my soup!

Growing up I had always wondered why some corn fields sometimes look like they had been freshly scalped, and others as thought it is so dry; stalks just sitting there about to fall over. Maybe a hot spell must have hit the area, and no one had enough water to keep it going. Droughts were common in Texas. What was going on. Yes, it really bothered me. That was until I traveled to the Appalachia Mountains to visit my childhood friend and her family farm. I asked her why the corn was still sitting in the field. She asked me if I wanted to drive over to the field and she would show me something. Okay, okay the soup part is coming... 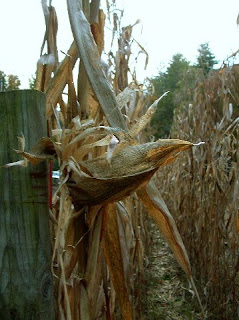 Back in September Lisa, her girls and I drove my van out into their pasture. We drove right to the corn fields. They were next to the vegetable garden we about to raid as well. There was this little blue bucket turned over on its side. You could hear music as you drove in, but where was the music coming out from? Lisa told me that they left the music on to scare off the coons, deer. and other critters. This scared them off so they would not steal the corn for their own gluttony. We laughed, because you should have seen the extension cord that came for almost a mile from the main house!

My own family had once moved from Virginia and Tennessee almost two hundred years ago and tried to grow corn on dry west Texas land. I heard family stories of the hard labor that went into working the land. Eventually oil and natural gas brought them fortune. They still own the land today. I had thought about the corn and how it feed so many poor immigrants back then. I had the pleasure of receiving a bag of fresh milled corn for Christmas from Lisa and her family down in Virginia, along with some ham.

Bush Mill, Nicklesville, VA- The only restored operational mill in the region was built between 1896 and 1897. Machinery in the mill is still intact. Annual festival with crafts, music, food and fun for all ages takes place during October each year to grind local corn and sold to keep it running. Recently restored, 1896 water-powered grist mill that uses stones to grind grain into meal. 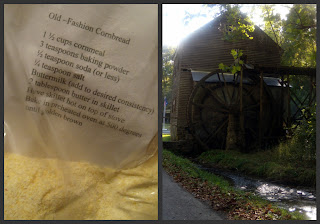 Corn nuts are a variation of parched corn. Indians and pioneers ate parched corn almost as a staple while traveling; it was very nutritious and took up little space so was considered an excellent trail food.

Parched corn was made by Indians in the process of putting dried corn on hot rocks or in hot coals. You can make parched corn by simply covering the bottom of a grease-less frying pan with corn and stirring until the kernels are uniformly brown.

Corn nuts are a little more refined. Albert Holloway invented corn nuts in 1936. He originally sold them to tavern owners to be given away free to their patrons as a snack that would be great with beer. Once sold to the public via taversn were called Brown Jug Toasted Corn Nuts. What we know today have additives to give them a fuller crunchier texture. As a sample batch, use one cup of whole corn, bought from any feed or health food store.

Soak the kernels in two cups of water for three days, in the refrigerator, or use frozen corn after roasting them for thirty minutes in a 250 degree oven.

Pour off the water, or dry the kernels in a towel. Heat up about four cups of oil (or grease; bacon, lard, vegetable oil; it doesn't matter). Just before the smoking point ( a drop of water will sputter in the hot oil). In a large spoon lower a heaping tablespoon of kernels into the middle of the grease. The grease will then begin to boil violently. Do this in small batches or the oil will erupt violently and splatter on you, the stove, and the floor.


Keep the hot handle turned away from the front of stove, especially if small children are present. Also, stand back as an occasional kernel will pop like popcorn. Believe me it pops alright; it reminded me why I hate frying anything at all anymore! 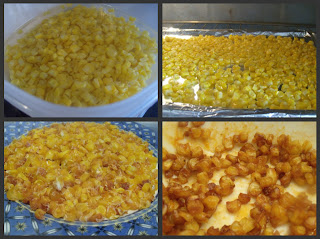 Tipper explains more about field and parched corn on her site. She says, “Here in the Southern Highlands of Appalachia, it was typical for folks to leave their corn in the field until it had been frosted on a few times and was completely dried out before the process of gathering was started. The corn in those days was different from the sweet corn most of us are familiar with today; it's often called field corn”.

She and I also spoke about a product called Corn Nuts (mentioned above photo); it appeared on the market when we were both young, and I enjoyed eating them. Coming to the conclusion that they derived from parched corn, I wanted to try making some. Tipper said I might be on to something. Her father had told her it was used as a diet supplement when long traveling was in order, so maybe there was a story waiting to be told. She also said that corn nuts sure tasted better than parched corn, so I had to find out. I decided to incorporate it into my soup recipe. 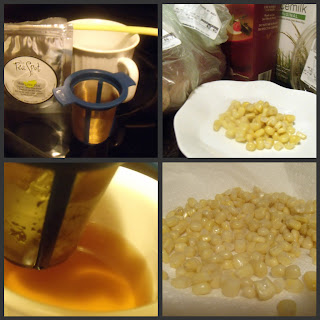 I followed a recipe in an old church cookbook my friend in Virginia's grandmother showed me. I made three attempts- I took the corn off of several corn on the cobs, sweet variety. I also took a bag of regular yellow corn- soaking both in water for three days as instructed. After drying, I roasted the yellow in the oven, and I fried the sweet white corn. Both were equally good and crunchy, but the fried was more plump and I added some chili powder and Louisiana hot sauce for extra kick with the lemon grass flavored chowder.

Begin boiling this mixture in soup pot; when begins to boil add the above ingredients*. Cook until potatoes are done. Reserve (and strain) half of potatoes and corn- set aside. Puree mixture until smooth (strain to remove skins from corn and potatoes); add brew lemon grass tea, and reduce mixture until thickens to desired consistency.

Taste to test seasoning, add seafood, and 1 cup rice milk as I used, or heavy cream if desired. Then add corn and potatoes back in. Serve. Top off with home made parched corn.

If you do not want to go through the trouble of making 'Parched Corn' then you could just top the soup off with some Thai Chili sauce and get a similar result, but what fun would that be if you did not get to experiment and find out what your ancestors enjoyed!