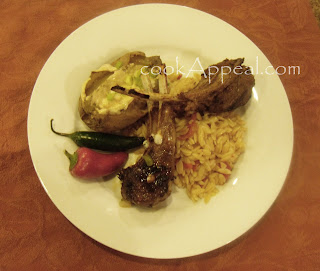 [Just a tease photo; it was served buffet style]

In last weeks post for Wine-Down Wednesday- The Other Bordeaux we have discussed the "complexity and subtle nuances of these wines" (as said in a funny comment by Sandi @  Whistle Stop Cafe). Now 'Partners In Wine' Adrienne and I want to share some other bottles we have tried recently or in the past, as well as my Super Bowl Sunday meal. Her and her husband, AWS friends of ours were having friends over for the game. We talked about it, and it was agreed I would cook, we would video tape the whole experience as a cooking demo and wine pairing as a practice run for future endeavors, and they would provide the wine and beer.

Other the other hand- the behind the scene Super Bowl activities... the grill knobs were completely frozen- AGAIN, lots and lots of who-rah yelling,  and lots of snow shoveling was going on (we had to dig out the grill and our car upon arrival). Of course to be honest with you, I do not know how Food Network employees do not pull their hair out with all the stuff that goes into filming a cooking demonstration. I have done many cooking demos, but not with a camera aiming at me. Adrienne and I were exhausted between scripting, staging, prep, camera set-up decisions, cooking, and the crowd yelling "Where is the food already"! Her and I have decided it was a bad idea to throw it all together on such a momentous day. Next time? We either hire a film crew, or we do it on a quiet sunny day. But Hey the Saints won! My mom was from N'awlins, so I was routing for them. On the positive side...we had good wine waiting!

Back to the kind of 'Wining' you came over here for, right?

The Menu- Lamb, with lots of other football 'food' snacking going on. Flavors of garlic, tomato, olive oil, paprika, chilies, and creamy yogurt sauce in the buffet line. The lamb does had a finish of Garam Masala that complimented the Bordeaux, but a rather pricey Bordeaux was a big disappointment.

Hands down, we felt the bargain Bordeaux's were better. We will continue introducing them to everyone when we can. Not to mention a left over Amarone (yes, I slipped this one in) from a tasting I have not posted yet; it was the perfect match for the flavors in my menu. Go figure, and it had been opened a week already. As in the last recipe post, we always drink up a good wine in a few days, but we also use the Vacu Vin & Stoppers to remove the air to help stop more oxidation and tainting to stretch it out. 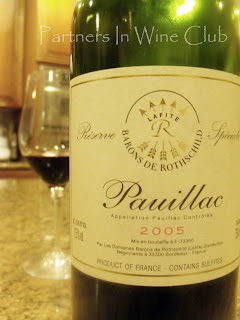 The Wine(s)- Listed are different from last week's WW- Part One and a few more recommendations from other reliable sources. Many believe in the Bordeaux world...anything that runs under $30-40 a bottle IS a bargain!

Chateau Les Roches de Ferrand Fronsac '00 $17, If you can find this rare bottle, it is ready to drink now. An elegant, multi-layered wine. Colored brick red, the wine boasts a plummy, spicy nose and flavor notes of plum, black cherry and cedar. Lovely mouth feel, with just the right amount of tannins to launch a long, slow finish. Mostly Merlot with a splash of Cabernet franc blended in.

Chateau Moulin Haut-Laroque Fronsac '05 $25, This purple wine has a subtle, almost elusive smell of violets and damp earth. The taste is peppery, with notes of berry and oak.

Both of these will go well with grilled meats!

Paulliac Reserve Special, Lefit Barons de Rothchilds '05 $25- This was opened because it should have complemented to lamb, and even the aged mellowed tannins would not fight the heat of the meal. Here’s a nicely balanced, dark garnet Bordeaux from Paulliac worth searching out. Showing black currants and touch of mint on nose, it provides a soft attack of ripe, lush mouth filling black fruit. We felt it fell short of its promise in name and reputation for a list price of $35 per bottle.

Adrienne said- "Maybe I have a sophisticated palette or crazy, but the Paulliac was a disappointment to me last night (we all agreed). I definitely have a palette toward fruit forward, in your face wines".

Bordeaux Undiscovered- Nick Stevens writes about wines the French would prefer to keep... He talks about welsh lamb, and pairs roasted lamb with this wine below. He mentions a dish infusing Paulliac into a dish, but does not mention much else...

Chateau Puyanché, Côtes de Castillon $11.99 US (blog mentions British pounds) -Dark garnet in color with the aromas of blackberry and plum compotés, leather and spices. This bottle is a supple and complex wine, well balanced and silky. As an aromatic wine it will go well with many meats including Duck, Chicken, Pork and Lamb as well as Italian tomato and pesto pastas, roasted aubergines and moussaka.

Unfortunately, I cannot disclose the recipe for this dish because the demo we shot is now in the hands of a television casting company. No more details until after I find out what is going on, and then I will give you a closer look at the dish. This was not a low carb day on all accounts, and I may have to release a bloppers cut on here for fun one day! Visit 'Corky' Partners In Wine Club to take a sneak peak at new joint venture. PIWC will be offering New Jersey Food & Wine education in and around the area, as well as 'Networking Partners'. This is something I started three years ago, but was too busy with CookAppeal Cafe; it has been on the back burner. So I am excited that Adrienne Turner has agree to help restart this project.