Food For The Soul- WAMPP 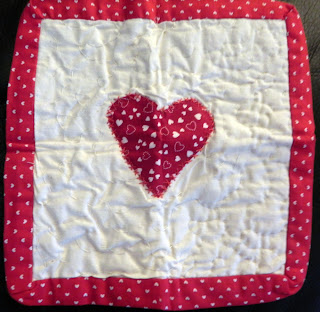 Back in 1999 my daughter, Anelisa began stitching a quilt for her barbie dolls in her last year of school. She then brought it home and was told to finish it with her mother, but I set it aside, as mother's tend to do and did not find it again until it was too late. Anelisa died ten years ago this July 14th, 2000 of congenital heart disease- she sustained five defects, Pulmonary Artresia the main crippler, however- the one that took her life was Cardiomyopathy. The same disease that took the life of my clients four year old daughter, Anjali two years ago.

The quilt for her barbie doll needed to be finished, so I began the final stitches, resulting in what you see above. I owed it to her to live on, and continue on even though my steps would be hard ones. As my life continued my own pattern of stitches, through friendships took shape. A purpose, or as life would have it a torch was passed on to me- to raise money for CHD research, especially Cardiomyopathy. It will never be clear why Anelisa picked a heart for her pattern, but mine is clear.

Two months ago a performer emailed me asking if I could help with Open Mics in the area, saying he was a singer/songwriter coming to visit his family in New Jersey. So, I pointed out a few, as well as my own Cultural Art Expression, we passed along phone numbers, and that was that. Alan Bradford eventually contacted me week before last, and told me he was in town, so we made plans to meet. Turns out he is a very in-demand song writer and spends most his days in the studio with artists. Alan co-wrote songs with such artists as Harry Chapin, and continues to find success in his work.

After talking with him in person on several occasions someone from his entourage let it slip he had a heart condition, as his own father did, who passed away years ago. My own heart sank, then Alan shared he had Cardiomyopathy. Last year he began taking experimental drugs that were developed through research funded by such charities WAMPP will support. If not for these drugs, Alan would not have had a life changing experience over the past year (he shared with me), and also be giving back to our community via his music.We both believe in fate. The two of us stitched a hug friendship by meeting, as I have with you.

As life goes along and we begin to stitch through our own hearts, pulling the thread and needle in and out the fabric of life, healing and meeting others who have experienced death and illness along the way, (as Alan mentioned in his last performance in NJ- he will be in Nashville next) we will and should  'Pass It On' (his newest song for next years album).

I realize the economy is rough right now, but a little added to a little, becomes a lot! 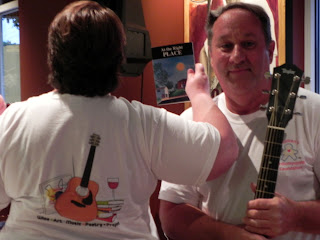 I am asking you to help make WAMPP- Wine Art Music Poetry Project a success. Most all of our equipment and other things have been donated. The T-Shirst Alan and I are wearing with the WAMPP logo were donated by Doc @ What's Cookin With Doc, and his cardiology team. We need signs, a banner, to rent tents and a few other things, but it will have to be covered through donations. Next year the overhead will be zero- all money will go to the charity.

Help me stitch a few more lives together- remember, no one lives forever, but our quality of life is important and research helps people like Alan Bradford spend more quality time with his daughter and other family.

Alan and I hugged before he left the coffee house, and I was all too reminded of what heart patients go through. His skin felt like Anelisa and Anjali's just from the heart pumping so hard. I pray my new friend will return next year to be the feature artist for WAMPP.
Posted by Chef E at Thursday, July 08, 2010