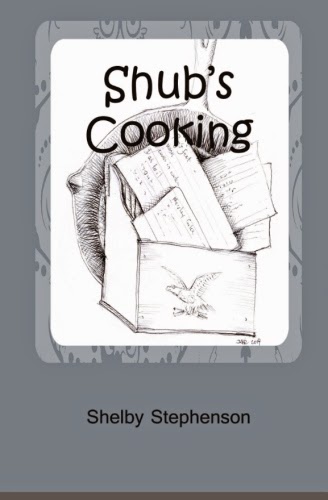 This is not just a poetry book, it is a viable cookbook. Shelby Stephenson is a North Carolina Poetry Hall of Fame writer. He has put his memory to good use here and recorded many of his mother's recipes from his youth. If you are a cookbook collector and love to read this is a must have!

Everyone of us she put our mother, grandmother, and great-grandmother's recipes into a book like this. When Shelby sent me the manuscript via Red Dashboard LLC Publishing, I had to have it. As a Chef and foodie, fellow southerner, and country farm girl I knew it was a valuable addition to our catalog.

"Poems do not need forms, they need recipes, and Shelby Stephenson’s poems cook. They inter-weave ingredients with metaphors to create delicious poems that entice our palates and our imaginations. Stephenson uses ingredients such as flour, sugar, butter, and eggs to bake enormous poetry cakes, cakes packed with memories and sensual flavors for all."

~ Andrew Jarvis, editor, poet, and author of Choreography, Sound Points, The Ascent, and The Strait

Here are just a few of the things you will find inside...

Some of the titles bring back memories from my own childhood. If you remember something your own Aunt made, your grandmother, and even a neighbor then you are likely to find it in Shelby's book.

"Shelby "Shub" Stephenson's collection of Poetry, Shub's Cooking, presents what seems like a series of recipes for Southern cooking in alphabetic order; however, like a Faulkner novel, these poems morph into far more than recipes and become hymns and memorials to a way of life long gone. Shub recalls the fried chicken and corn bread we would expect.  But there is coconut pie and the celebration of the bullace grape. He recalls the hunting of squirrel with the single shotgun he purchased and the fish he caught in the creek. He includes a sauce for dove even though he never seems to have shot one.  He leaves one with the sense of life drawn from the land through his mother's efforts and his own, then reshaped into love by his mother's hand in her kitchen."

You can purchase Shub's Cooking via Amazon.com