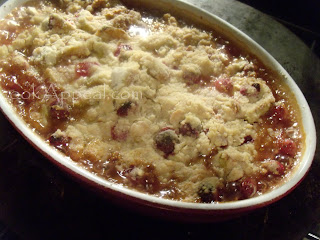 My candle burns at both ends;
It will not last the night;
But ah, my foes, and oh, my friends--
It gives a lovely light!

When Nancy, a wine and food loving friend here in Jersey, first asked me if I liked figs, I responded "Yes, I adore them".

Ed, her husband told me they had several fig trees in their garden; then he said they also have more than they ever could eat themselves. Explaining that they usually all begin to ripen at once he asked if I would like some.

Me? Say "No thank you" to food I could use in a new recipe, of course I was available to pull weeds for even just one bite of a fresh off the tree fruit.

Ed told me they would be ready by August.

I only had two months till August arrived; so did I, and now they are history in my Fig-Cranberry Cobbler. 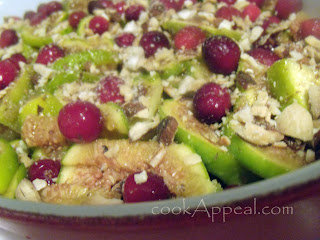 Figs in New Jersey? Yes, some avid gardeners and farmers have been growing sixteen varieties of fig trees in pots here for years. 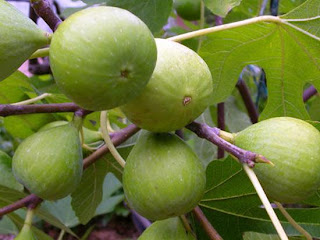 I talk about fond memories of food experiences growing up in some of my past writing. Fresh picked tomatoes, concord grapes, as well as many other goodies from my grandmother’s yard, but my first kiss on the lips were from a fig; it will forever ring out in my early teen chapter of my foodie memoirs...

Clifford was an unusual man living next door to us. His wife Peggy left early every morning to go to work, but her husband was always working around their house, the yard, and the garage where he kept a refrigerator full of Pabst beer. Anytime I mention them to old neighborhood acquaintances, they mention that refrigerator. A sign of ingenious we did not recognize as children, our parents could not afford, but a clue to just how eccentric Clifford might be.

To wrap up this sweet tale without a long paper trail... Clifford was in his backyard one hot and boring Texas day. He and the lanky awkward teenager were only separated by a three foot chain link fence. He would speak to me for the very first time. See the neighborhood kids were scared of him. A once marine who wore tattered jean shorts, sandals, and barred many a tattoo; well Clifford Alverson just looked mean. When he spoke I did not understand him clearly. He had lung cancer surgery, and only spoke through a tube in his throat. Was, he speaking to me, and with his hand reaching out across the fence with several small greenish looking objects, or was he trying to poison me? I knew it, he did not like kids.

I walked slowly and carefully over to the fence; making sure plenty of space was still between he and I. His words became clear,"Do you like figs", he asked. I had never had one before, or even seen one. Taking them I am sure he saw me starring at them strangely. Should I peel them I thought. Generally green fruit are either peeled or change color in my food world. I watched as he took one and bite straight into its flesh. You should have seen the joy light up his face, as he devoured a few more, so I took the plunge. Finding them a bit bland at first, but it was soon replaced by sweetness. Downfalls I admit tingly have; an addiction for sugar in my adulthood.

Clifford would find me each summer afterward standing at that fence like a browsing goat; it was like those out of my reach fruit bearing limbs would not yield and bend to my weak teenage mental powers. Only a handful passed from his giving hands to mine, but still allowing me to take in their sweet delight. We became good friends he, Peggy, and I; an unusual foodie relationship before its time. A memory brought on by nostalgia when seeing this fruit, and it has partially melded my passion to try everything that only a fence might now hold back. 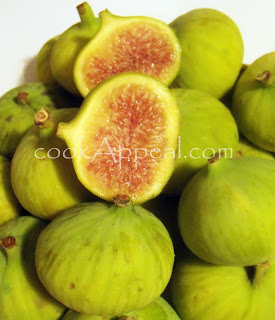 HISTORY/INFORMATION: Figs are believed to be indigenous to western Asia and to have been distributed by man throughout the Mediterranean area. Remnants of figs have been found in excavations of sites traced to at least 5,000 B.C.

In the United States, the major centers for commercial production of cultivated figs are California and Texas. The more popular Californian varieties are packed fresh or dried. Most Texas figs are canned.

Figs were brought to California by the Spanish missionary fathers who first planted them at the San Diego Mission in 1759. Fig trees were then planted at each succeeding mission, going North through California. The Mission fig, Californias leading black fig, takes its name from this history. The popular Calimyrna fig, golden brown in color, is the Smyrna variety that was brought to Californias San Joaquin Valley from Turkey in 1882, and was renamed Calimyrna in honor of its new homeland.

Figs grow on the Ficus tree (Ficus carica), which is a member of the Mulberry family. They are unique in that they have an opening, called the "ostiole" or "eye," which is not connected to the tree, but which helps the fruit's development by increasing its communication with the environment. Figs range dramatically in color and subtly in texture depending upon the variety. The majority of figs are dried, either by exposure to sunlight or through an artificial process, creating a sweet and nutritious dried fruit that can be enjoyed throughout the year.

They are available for picking anywhere from May to June, and through September, but dried varieties are available much of the year. August is the month that figs are available here in New Jersey, and information for doing so is here NJ.com.

· Figs are fat-free, sodium-free and, like other plant foods, cholesterol-free.

· A small serving of about 1 1/2 dried figs equals one fruit exchange, or 15 grams of carbohydrate, provided in the form of glucose and fructose.

· Figs are high in fiber, providing 20% of the Daily Value --- more dietary fiber per serving than any other common dried or fresh fruit.

· Figs have the highest overall mineral content of all common fruits.
Detailed nutritional information can be found by searching the USDA Nutritional Database . Enter "Fig" (no quotes) as the keyword and select the link and report of interest.

Scientific classification: Figs constitute the genus Ficus, of the family Moraceae. The common commercial fig is classified as Ficus carica.

Information provided by Culinaria Books, and Food Around The World, a guide to global eating text from my culinary studies. 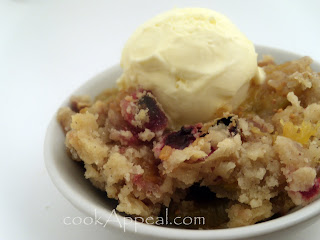 I have been told that unless you make jam, or dry figs you should use lemon and a tart fruit in baking these delicate fruit into a dessert of sorts, as to offset the overly sweet fruit...

1 lime, juiced
1 cup frozen cranberries (I always buy a few extra at Thanksgiving and freeze for baking)
12 or so sliced figs, rinse and pat dry
1 cup orange juice, no pulp

Place this all in a baking dish, I used an oval ceramic, or you could use what works... Preheat oven to 350 degrees 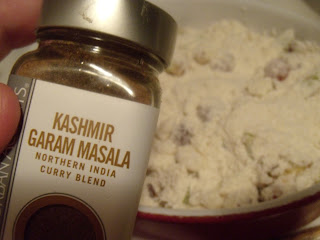 I just used one of my mom's old biscuit recipes; added some walnuts and garam masala, and sprinkled on top.

Bake until brown and bubbly...

Recommended with ice cream, and it practically turns out like a candied, sticky, gooey sweet mess of goodness!
Posted by Chef E at Tuesday, September 01, 2009