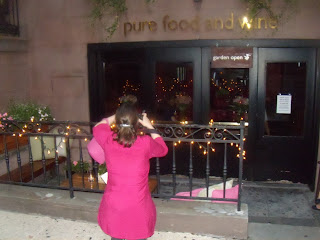 Given I started blogging almost a year ago to share my food experiences in a dairy sort of way, I do try and inject many other things as restaurant reviews, new and exciting foodie knowledge (to me any way), and making friendships along the way in a very informal fashion. This is one of those posts...

I thought about calling this piece 'Pure Food & Wine + Blog Friendship = Priceless', but too long. Four months back a blog I follow Rachel @ Rachel Ramblings and her site Veggie Views put a notice on her site saying she was coming into New York City. She asked for suggestions for things to do, and did anyone want to meet. Hubby and I have lived in Jersey now for four years, and do not get into the city as much as we used to. I believe that happens with everyone. You live somewhere and it all seems to fade into the background of our daily lives. So, I told Rachel we would love to help her out...

As the time approached we discussed what Rachel might want to experience on her two day trek. Open to ideas, she being into photography and time on her own to take in some of the city on her own I suggested we not do the usual tourist stops. I thought it would be nice to take her by car to some of the off kilter sites we have been to. Rachel agreed to my idea. Turns out with the heat; it was a great decision.

I had also asked her about eating out. She informed me she was vegetarian. Hubby and I can deal with that, as we eat vegetarian. That is also when Pure Food & Wine in the Gramercy Park area of New York hit me, and it would be a great experience for foodies of any level. This vegetarian and vegan restaurant opened up in June of 04. Hubby and I had eaten there the year it opened. We were dazzled. We saw celebraties just tables away. Raw food was not a new concept for me, but there were no upscale eateries of this nature outside of our Chez Pannise in San Francisco. Though still not a 'pure' raw or vegetarian food destination, but a good one indeed.

Back to meeting up with Rachel- We arranged to meet her at hubby's sibling’s upper Manhattan home between Lexington and third. She had text me she arrived and was waiting outside. With the heat I told her to sit in the lobby, where the air conditioning and comfortable seating would be a nice relief from walking around central park until our arrival. She and I both agreed we looked just like our blog photos, and laughed. Rachel was a delightful conversationalist. A bit shy at first, but I can hit you like a tornado with my chatter!

After introducing her to the family upstairs we decided to give her a diner experience. Diners have wonderful history in New York, and Jersey, but I had to remember she is not as into the food aspect of blogging as I am. We picked a small place a few blocks down, got seated, and got acquainted. Rachel expressed that drive by site seeing was fine with her, as she had walked quite the distance from her tiny quarters in Harlem to Central Park most of the morning.

We literally drove her to almost every borough New York has to offer. She expressed that one does not realize just how big this city really is. I agreed since once I felt the same overwhelming sensation as hubby took me from one end to the other over the years. 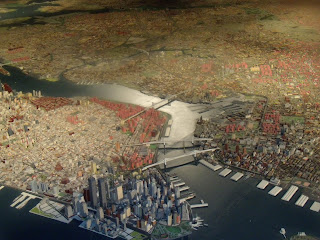 After our last stop in Queens visiting the museum in Flushing’s Meadow Corona Park. We decided to take a look at the full scale model of New York City. Rachel got a better sense of just how big the 'Apple' really is. She also got to see the famous landmarks used in the ending scene of 'Men In Black'; where the alien had stashed the flying saucer atop the 1940's world's fair attraction. The parks history told of being built upon what once was a swamp. During our tour of the Queens Museum we laughed about how meeting other blogs might be a scary thought. She told me her mother checked me out. Her daughter was traveling quite a distance to be getting in the car with a complete stranger. Awww Mom, I hope Rachel gave you a good report! 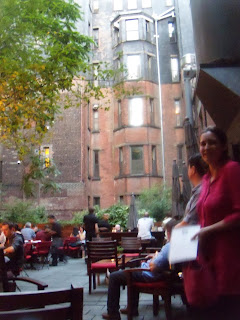 Now it was time for dinner. Our conversations that day ranged from talking about the comparisons of restaurants and work ethics of ethnic eateries in her country; to many other things of photography; my love for Indian cuisines, and what her husband thought about eating vegetarian on a regular basis. We were having a good time, but it was time to sit and relax in a nice air conditioned restaurant. Rachel was warned that the first impression of PF&W would be impressive, and to not feel intimidated. You walk down a few steps and if you find a wait, you are greeted by a cute seating area. The posh pink interior would be modern and bold as the menu.

[Plate of Assorted Cultured Dr. Cow Tree Nut Cheeses and Rosemary Crisps- Rachel and I decided middle cheese was the best, but the crisps overwhelmed the rest...$19] 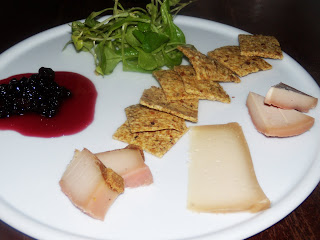 The patio seating would be more impressive. One problem though, seating is tight inside. First thing Rachel and I cannot help but notice after sitting down, very frayed and tattered edges of chairs. People watching can keep you a little distracted though. The menu was the only thing that had changed since my last visit. Seasonal raw and fresh dishes appear each year. 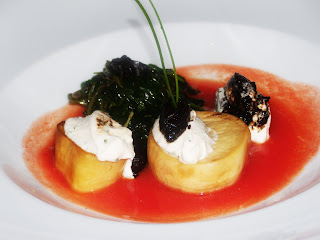 Several reviews from '07 and '08 still state that this unusual 'haute' cuisine of raw and vegetarianism is a magical lure for our big apple. Hubby and I feel with the big buck prices the menu display they could at least offer a few recession menu items. If you visited the kitchen you would only see blenders, dehydrators, and a lot of dicing, and slicing going on. No stoves, hoods, or gas exist in that kitchen. Portions are small, but according to Rachel American portions are still much larger than her English upbringing. Once finished we all felt satisfied. No dessert was ordered, and not at $14-17 per item.


[Squash Blossoms Stuffed with Spring Onion and Herb Cheese- Would order this again!] 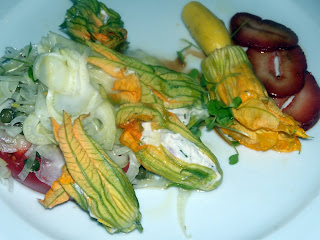 I mentioned 'Recession Dining', and would like to say a few more words... Sure quite the lot of New Yorker's have the money (many reasonable places to eat on a regular basis) to spend on things like $12 candy bars (I admit I bought one for $8.99/bacon and dark chocolate); $32 hamburgers at Daniel Boulud's; $12 for Atlanta’s Dogwood crab cake-fondue, but many top restaurants like this are offering recession menus. Hopefully we will come out of this soon, because I have seen a few of my friends here in the area loose their jobs, because the owners of the restaurants refuse to let go. Even Gordon Ramsey recognizes area competition can take you down.

[Caper Lemon Roasted Chanterelle Mushroom with Truffle Creamed Broccoli- Had these tiny wonderful purple chive flowers garnished about the plate that were peppery in taste!] 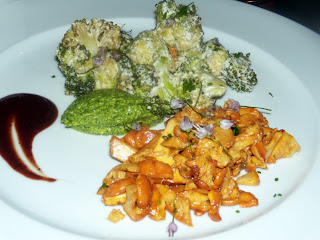 After reading many upon many reviews for Pure Food & Wine after returning from NYC; I found the biggest complaint was how pricey the food is; how small the portions are, and most would not go back. Hubby and I discussed it, and have decided it was our last visit; unless we see the prices go down. The food is a piece of art in many ways, but not the best we have had. How expensive can the overhead be to charge what they do for cashew milk and squash blossoms, and come on management get those chairs recovered! (‘Purely’ my opinion)

[Interior of PF & W...maybe I am being too critical, but see the torn corner on the chair below...even Rachel agreed in her posting of this experience...] 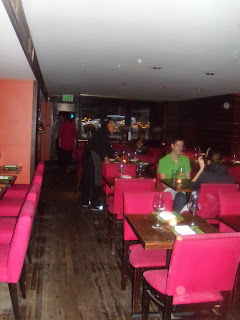 We did enjoy the meal, and if you have the extra cash PF&W is worth the food experience (The White Sangria was fabulous). After dinner we offered to take Rachel back to her rental, and took her on one last dusk scenic drive that took us through the Bronx. I felt that overall our visit and tour was successful, even if we almost over heated her with the walk in Brooklyn.