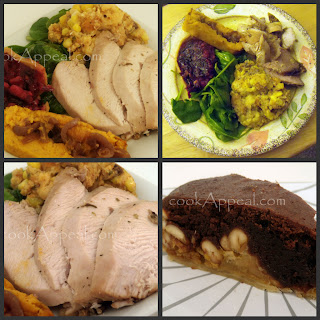 This day has developed so many meanings over the last century. Christmas shopping is what comes to mind for many of you out there, or maybe just bargain hunting.

The term "Black Friday" is the name which the Philadelphia Police Department has given to the Friday following Thanksgiving Day, so it officially began on the east coast around January, 1966. The phrase was never a term of endearment to anyone who had to bus or police the crowds. "Black Friday" officially opens the Christmas shopping season in center city, and it usually brings massive traffic jams and over-crowded sidewalks as the downtown stores are mobbed from opening to closing.

The Black Friday concept spread across the country approximately in 1975. Shopping sprees at all cost, no matter what the economy. Economists base spending habits for the remaining days to Christmas on exactly how much retailers earn this day. I find that actual 'bargain' sales seem overly exaggerated, and usually we cannot find anything of real value not already offered before after today.

Hubby has to do a lot of work travel, so we stay home.

This year we did not head to Long Island to celebrate with hubby's family like we have the past ten years. I had already ordered a Bourbon Red heritage turkey from Griggstown Quail Farm for the second year in a row. Hubby wanted all the trimmings, as I was planning on maybe a few. Company Saturday, I plan to break out more food. Like usual I did not cook anything the traditional way, only a few traditional ingredients.

I made a corn casserole stuffing with mustard and a mild blue cheese. We have never really cared for canned cranberry sauce, so I make a torte using apple cider, ginger and maple syrup as the flavor enhancer. Sweet potatoes were mixed with smoked chipotles and garam masala; then were cooked in a terrine using caramelized onions as the center. Then for greens I had planned on sauteed collards, but with time constraints I just wilted some spinach as a base for the plate loaded with carbs; until the heritage turkey hit the plate.

This year I found myself with a rather large 18 pound bird; it was too late when we learned family was spreading out this year to change my order. We will be eating turkey creations with family and friends on Saturday, so no worries. Cutting one half into pieces and brinning it in a shallow plastic container was my ‘new tradition’ idea. Brine- Apple cider pomegranate juice, cinnamon sticks, apples, brown sugar, salt, and nutmeg shavings; heated to dissolve sugar and salt, then diluted with water. Over night bath, and then into a roasting pan with a similar reduction, herbs, red pepper flakes. In the oven for a few hours till done (I placed cut breast over apple slices to keep from overcooking on bottom. 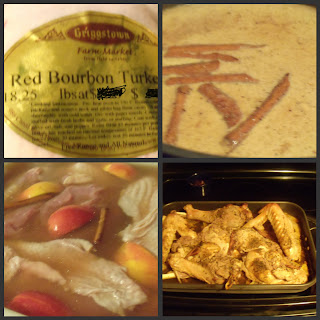 I did branch out with dessert- a chocolate brownie cashew torte; it overflowed onto the cookie sheet, and I did cut back on the recipe. In spite of the messy clean up, the torte was dark chocolate bliss to our week’s end. My idea of a Black Friday! The bottom was a traditional pecan pie recipe, but using cashews; then topping it off with a dark chocolate brownie and baking it in a crust, and in a torte pan. 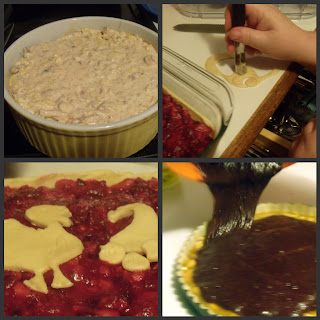 Today and the rest of our weekend you will find hubby and I relaxing at home. We are taking advantage of some Cyber Black Friday shopping, good music or a movie playing, while nibbling on those yummy leftovers... 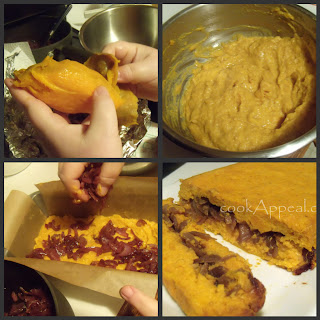 Hubby was my action photographer- Thanks Sweetie!

Bake 375- 45 minutes, or until cooked through. Remove parchment, and slice when cool to the touch.
Posted by Chef E at Friday, November 27, 2009