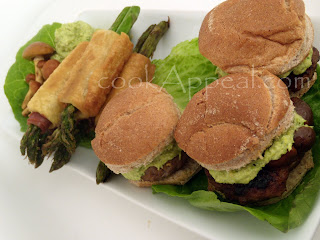 Normally in regards to food and wine pairing- I say throw convention out the window. My philosophy has not changed, but in regards to being given the challenge of pairing a very tasty Wedding and Russian Cuvee produced by a well regarded wine maker, Iron Horse Vineyards in California, well, I decided to keep a few things in check.

-Meats: Veal, Pork or Lamb, especially if served with creamy sauces
-Seafood: goes well with shrimp, lobster, raw oysters, sushi and just about any other seafood.    Raw fish work especially well as appetizers with this beverage
-Salty: Try pairing a glass of Brut with prosciutto-wrapped appetizers, cocktail sausages, egg-based hors d'oeuvres, fried mushrooms or crab rangoon
Cheese: Salty cheeses like Parmesan work well with Champagne or Sparkling
-Fruit: consider doing dessert appetizers at the end of the meal, as they can be served with most desserts

Kim Jacobs, I enjoyed this taste test, and pushed it to the max!

Champagnes and Sparkling wines are often used, and great for breakfast and brunch (Mimosa's), afternoon lunch with the girls (say, a nice Pinot Noir Rose), or any old excuse to open one up works for many who adore them. I do adore them. Easter is another good reason to open a nice bubbly up! With the weather warming up, because the sun has decided to peek out on a regular basis, I found firing up the grill and cooking outside worked with the menu I had in mind. The Iron Horse Cuvee pairings would make it even better. 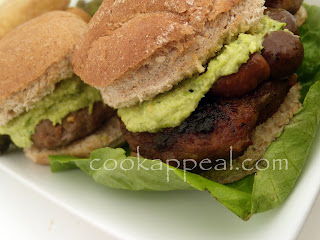 The missing element in this night's tasting was a cheese course. Hard salty cheeses such as Spanish Manchego or the Italian classic Parmesan Reggiano compliment the sharpness of the sparkling wine like few others. Soft cheeses such as Camembert or baked Brie pair well due to their creaminess. If you are going to serve a sparkling wine for any occasion, don't pass up the of the best and easiest food available - cheese.

I went with the creaminess of the Pesto to match the flavor of the buffalo meat. There was an added element of buffalo sauce as part of the slider seasoning, but the subtle heat did not clash with the bubbles as it would have with high tannic wines. Mushrooms were sauteed in the resting juices of the burgers, and then were added as a topping for the sliders.

The grill asparagus was simply dressed with EVO and a sea salt. Both cuvee's went well with the saltiness and finale fried exterior of the prosciutto and pastry wrapped asparagus cooked outside in a pan on the open flame to save me clean up on the stove inside.

Figtree's brilliant 'Asparagus Pesto' was one of the killer ingredients in this menu! I try and cook many recipes I see on blogs when I can, but much of the time I tweek them if I have used them. Her recipe screamed to remain as it was, brilliant! I had the opportunity to meet her this past week and will post our get together at a later date. 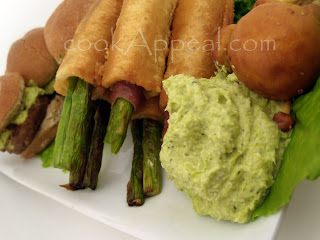 Iron Horse Vineyards is located in the Green Valley region of California. The bottles average from $33 to  $38, and are well worth the money. Sipping on the Cuvee's alone, and with the food was a winner in my glass!

The name Iron Horse came from a train that stopped at Ross Station at the turn of the 20th Century. The logo, the rampant horse on a weather vane, came from an actual weather vane that was unearthed when they were leveling the ground to build the winery.

In the arena of Sparkling Wines, Iron Horse stands at the top.About Us The wines have been served at the White House for the past five consecutive presidential administrations, beginning with the historic Reagan-Gorbachev Summit Meetings, which lead to the end of the Cold War. 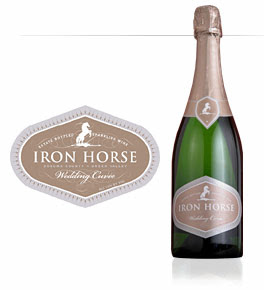 I purchased these wines on my own, and no money was exchanged for this post! This was written simply for my friends Adrienne and Kim.