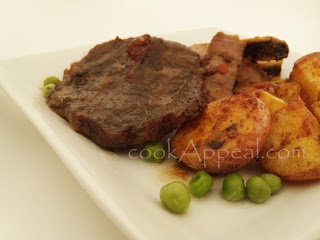 This was my second time to make Korean BBQ. The first being 'Bulgogi', and I found these simple and tasty dishes to make. A nice change from my normal barbecue meals. Using spare ribs and small blade chops for this style barbecue along with the marinade, made the meat very tender and enjoyable to eat. Almost light, since we did not eat a larger portion.

Galbi or kalbi generally refers to a variety of gui or grilled dishes in Korean cuisine that is made with marinated beef (or pork) short ribs in a ganjang-based sauce (Korean soy sauce). Since galbi is generally made with beef ribs, it may be called "sogalbi" or "soegalbi" in Korean, whose prefix, "so" or "soe" (beef) is often omitted as well.

The ingredients are marinated in a sauce made from Korean soy sauce, crushed garlic, and a sugar source. Our meal was finished off with an addition of rice wine vinegar and hot pepper sauce, a few ingredients that have come into play over the years in their cuisine, but not traditional. I remember my parents using soy sauce in meats when we barbecued during my childhood, and enjoyed the flavor.

When cooked on a griddle or grill, the meat is usually cut in thin slices across the bones and called L.A. Galbi. This permits the marinade to penetrate the meat faster, allows the meat to cook more quickly, creates a more tender cut, and makes it easier to eat the finished dish with chopsticks. Just like the other dish, Bulgogi, you serve side dishes called 'banchan'.

In Korea, galbi is also a popular picnic food, and many people have portable gas or charcoal stoves for cooking it outside.

Sweet peas and 'ginger' potatoes serve as a wonderful side dishes for our dinner one night.

'Ginger Potatoes'- Take three quarts of water- begin to boil. Add 1/4 cup grated ginger and brew a form of tea, along with 2 tablespoons of honey, stir well, until dissolves. Remove from heat. Add sliced potatoes and let sit until water cools completely. Drain, and then toss in olive oil. Sprinkle with fine crushed red pepper (I used, Aleppo- named for the town in Northern Syria it originates from; almost sweet, but like Hungarian paprika) and cilantro,  then pan roast until fork tender, but have a slight crisp exterior.
Posted by Chef E at Wednesday, May 05, 2010