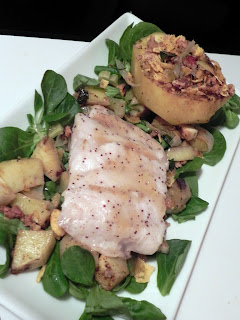 My favorite time of year- I adore fall and its bounty of color. We got married in October, love all that is pumpkin and squash! I also am adoring all the pumpkin and squash recipes out there, fantastically presented on many of your sites, so I thought I would share this one I made incorporating a whole grain cereal. Something I was told by the dietitian to use as a filler snack when I am hungry, and I am hungry throughout the day it seems.

Fresh market catch- Hake with an organic apple and acorn squash stuffed with crushed cereal, and a dash of maple syrup.

For years I did not like eating meals with a fruit twist. Now I adore it, as long as my taste buds have that spice finish. Spicy, like chipotle.

Puree apples without skin along with some apple cider and poppy seeds, and a sprinkle of chipotle (dried smoked jalapeno in coffee grinder- to a powder form). Acorn squash cleaned, halved, and filled with whole grain cereal, onion, white sweet potatoes, parsnips, apple pieces, drizzle of maple syrup, salt, pepper, Jamaican allspice powder, and less than a pinch of chipotle powder. Don't forget the crushed cereal, and there are some out there with less than 5 grams of sugar added that taste good (not panko or bread crumbs when eating gluten free like I am, but you feel free too).

The sweet balances out the heat.

More information on Hake (my fish book, and on-line)...

Hake is the Rodney Dangerfield of the whitefish world. It's the fish that just can't get any respect. At least that's the story in America, where the seafood industry goes to great lengths in its efforts to perpetrate a hake cover-up.

In places like St. Louis, hake is called jack salmon. The Midwest, where until recently most people didn't know the difference between a cod and a coho, is a traditional dumping ground for cheap fish. On the West Coast, home to one of the largest hake fisheries in the world, seafood processors changed the name of Pacific hake to Pacific whiting in the 1970s in a fruitless attempt to give their fish an image boost.

When it's not being passed off as some kind of a piscatorial puzzler, hake is simply sold as whitefish, or more often as "fried fish."
Posted by Chef E at Monday, November 15, 2010