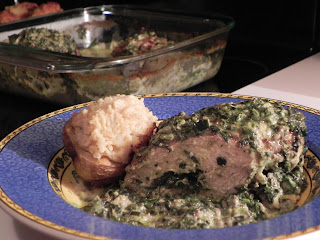 The Daily Spud started a traditional Parade of Irish Food last year, and I got in on it at the last minute, but this year I am on time with a meal of Green Stuffed Chicken, Twice Baked Irish Beer Mustard Stuffed Tator's.

We are going out tomorrow to watch a fellow writer Grace's husbands band at a Hillsborough pub, so I had to get it together early.

The Daily Spud also has a great Irish Beer Mustard recipe I decided to mimic. Bake some potatoes you have cut in half, I used some yukon gold's (on the bigger side). Place in a baking dish, roll in olive oil, and cover with foil. Bake 350 degree oven for 45 min or so.

Uncover and then let them cool; take out the insides of each cooked potato half; place in a mixing bowl. Mix in a good amount of the Irish Beer Mustard, onion, cheese, heavy cream and salt to taste. Just to make sure it screamed of Irish Beer, I drizzled more on each potato before stuffing. Spoon mixture back in potatoes and sprinkle with cheese of your choice.  Bake again until golden brown- uncovered in 350 degree oven for about thirty minutes.

Butterfly the chicken breast, but only thin enough to roll (if needed pound them in between plastic wrap). Then marinate chicken breast in a good dose of pesto over night. The next day I rolled them around a frozen spinach, heavy cream and cheese mixture. If any spinach is left over I placed on bottom of pan and place rolls on top. I mixed pesto with some chili paste I had made previously and rubbed on top, and placed some spinach mixture on to of that; add a splash of chicken stock to keep from drying out too fast. Bake uncovered on bottom rack.

Bake for 45 min in 350 degree oven (frozen spinach mixture helps keep them from drying out).

Once cooked, spoon spinach and chicken into bowl and place potatoes around the chicken. Serve with a beer of your choice- Irish Stout!

I decided this totally would be good with a piece of salmon, or smoked salmon pieces mixed in the potatoes for an appetizer!

To join in, send an email to paddysday [at] thedailyspud [dot] com including:

- Your name
- Your blog name
- A link to your blog post
- A title for your dish or drink
- A picture of same (preferably 500 pixels wide, 72 dpi)
- Anything else you’d like to tell me about it
- Include a link back to this post and use the logo above if you like
Posted by Chef E at Wednesday, March 16, 2011