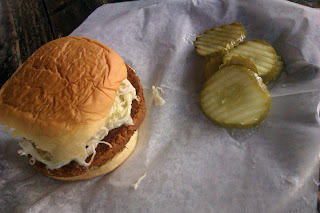 It has been a while since we have rated an eatery, so let's jump in with this micro-brew location up north from us. Barcade was suggested as a meeting place for me and a fellow poet-professor friend living in Jersey City.  He enjoys his beer, and we do as well from time to time. The weather was getting warmer out, and going over some of my performance poetry gave us good reason to hide inside.

The micro-beers are fantastic, and so is this sandwich. It is totally meatless too. We wanted to nibble before hitting another place around the corner for our big meal of the night, so I saw this Chickpea-black bean burger with coleslaw. Of course I thought it was on the side, not on the burger, but I gave it a chance and took a bite. Wow, was it fantastic! Like to take chances? Then do on this. They have a selection of other sandwiches, like pull pork, but this was paired with a belgium ale and it was even better!

Check out there Barcade menu (pizza crostini is good as well) 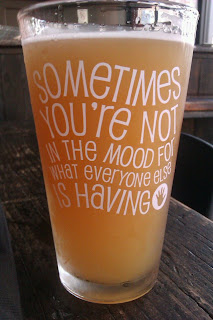 There are other locations, like Philadelphia as well...
Posted by Chef E at Monday, July 09, 2012