'Putting Up' With Me 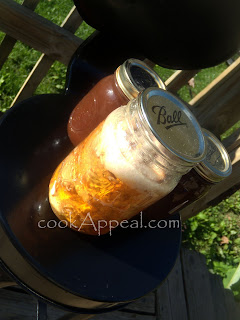 This month it has been one great year of blogging for me, and I do not plan to stop any time soon. I love everything about food; discovering, cooking, and eating as much as I can, as well as writing on the subjct. There will be many more fun dishes on my site, and I thank all of those who come over and read my blog!

While on my long drive this past September visiting areas of Virginia, Tennessee, Kentucky, and then down to Texas; I had the opportunity to listen to one of my favorite NPR programs, The Splendid Table hosted by Lynne Rossetto Kasper. 'She gives public radio listeners a fresh take on their love of food' the website reads, and I feel this is so true. Many of the programs are great, but one in particular was so relevant to my visit in the Appalachian mountain area.

[The rolling hills of my friends family farm land] 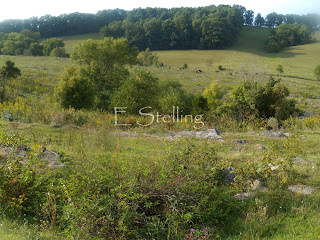 NPR's Splendid Table host, Lynn began interviewing a woman who is part of the 'Canning Across America' group. Go over and check out their website, as well as the September 26th program that discussed the movement they refer to as 'Putting Up'. A term I heard my own grandmother use on many occasion. Many of us grew up eating canned goods; whether in small batch canning from items passed to us from friends and neighbors, or crops our families grew on their own property. Canning was a way of life for many in the south, and has made a come back in the recent years as part of the broader sustainability movement. Also associated with locally grown and organic eating of localvors involved in Slow Food.

In farm communities like the Appalachian mountain area; 'putting up' has never wavered. Canning has long been a way of preserving foods through the winter months. Tiding over families that have little or no money; when waste of crops is not an option. Canning today for the most part has become more of a hobby. A hobby out of necessity for my own family while my children were small, and with little money; it was well worth the labor it took to collect, clean, prepare, cook, and can the piles of home grown, or farmers market goods (I was part of a farmers market co-op for many years, and now a CSA local program).

My friend, Lisa (who grew up, and lives in the Virginia mountains) took me out to visit some friends and relatives. We collected a few canned items, and stories along the way. One item still a favorite of mine today, Apple Butter. Did your mom ever burn toast like mine, but save it with home made jam? I have heard similar stories from people on how their mom's would burn toast, but after spreading this thick sweet concoction, or any homemade jam on a dark slice; that helped salvage breakfast. Boy did it taste great then!

My own grandmother canned many things like tomatoes, concord grapes, peaches, and made apple butter from ingredients they grew on their property. Like many of our own families; they learned from their parents; who learned from theirs, and on down the line. Chronicling my dad's genealogy this past June I found that his side of the family came from this area, and lived here for many years before moving to Texas. I plan on passing down this 'putting up' family tradition to my own grand kids one day. The areas history of 'putting up' Apple Butter (as found on this blog site), and other Appalachian customs make an interesting read.

I headed back home with jars of apple butter, salted pork loin, and shhh! even a jar of Corn Mash aka Moonshine...better known as white lightning in the area. The government now allows a legal version of moonshine to be produced in the area; it is 80 proof, 40 % alc/vol they call Georgia Moon Corn Whiskey (sold in local liquor markets). I have not sampled any of the goods yet, and the decision is also still out on what recipes will be used for each gift I received. 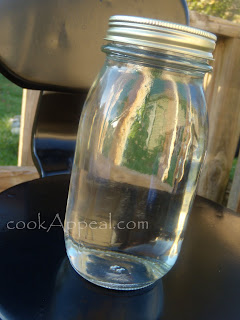 When you go over to the 'Canning Across America' site you will see the tops of light blue mason jars. They were and are still used for canning. and from what I am told moonshine in the mountains. Bootleggers also used recycled jug handle vinegar bottles that appear in the Tennessee area if you search hard enough.
While shopping at local antique stores I found the blue Mason/Ball jars, as well as vinegar bottles for a pretty penny- $45 each or more. Simple unmarked glass jars (pictured above) are sold at a much less price in grocery stores. Traditional new or used Ball and Mason jars are still however the popular choice for 'putting up' in most parts of the country.
[A local coal mine processing station near Nickelsville, Virginia; were I was visiting in September, 2009] 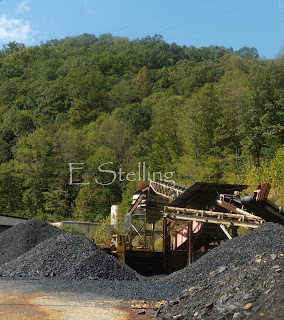 I was telling a story...

I am going away to fish for King Salmon in Pulaski, NY for our anniversary. An anniversary present for hubby, and a chance to catch Steel Head Trout, and maybe a brown, or river trout while we ware at it. I will be back to report on the outcome. This time of year the Kings come to spawn, and we hear they catch them on a daily basis (up to 30 lbs). Debates have sprung up on whether the fish is worth eating due to its deterioration after spawning begins, but we will see. Maybe there is a 'drunken' salmon recipe in the making here...

Food served in the Appalachian Mountains differs slightly from other southern cuisine, but was molded much of the southern foods that made its way to harsh territories of the old west- The Southeastern region of the mountains was settled mostly by English, Scottish, and German decent. Terrible travel conditions and poor roads limited most settlements to only foods that could be produced locally. Seafood, beyond the occasionally locally caught fish, were unheard of.
Diets were almost meatless, except for wild game, particularly during the winter. Pigs were raised and the meat cured for later consumption, but often the meat was used as a flavoring instead of as the main course. For example, sausage was often cooked in small portions primarily to obtain grease for use in gravy instead of as a main course.

Corn introduced into our culture by native Americans also influenced our diets and cuisine in many parts of our country. Cornbread was eaten regularly since corn grew well locally. As flour became available, biscuits and johnny cakes became more popular. Salt was available, notably from Saltville, Virginia, but until black pepper appeared, few other seasonings were used. Meats were generally smoke cured until then.

Women in this area were often herbalists, and may used local plants in seasoning. Chicory, which could be grown locally, was a well known coffee substitute. Corn whiskey, milk, and water were available from the farm. Coffee, sugar, and tea were all slow to become available. Fruits that tend to be more popular in this area are berries and apples.

Home canning is a strong tradition

Dried beans are a major staple food during the winter months, and were the cheapest of the foods available. Typically they are served as soup beans with wild onions and salt pork for seasoning. Kieffer pears were available along with apples that are used to make pear honey and apple butter. Canning included green beans (half-runners, snaps) as well as shelled beans (green beans that were more mature, and had ripe beans along with the green husks). Also popular were bread and butter pickles, pickled beets, and chow-chow (something my dad loved to make). Tomatoes were canned in large numbers. Along with sausage gravy, tomato gravy, a roux thinned with tomatoes, was very popular.

Southern Cuisine of the Appalachian Mountains

Mountain dwelling was very common for not only mountain men but it was very common for large families.With the exception of coffee, food supplies many times duplicated the diet of native tribes in various locations. Wild game hunting and trapping was the source of the meat; which gave them fresh red meat, fowl, and fish. Fresh water was always available due to pure mountain steams. Plants such as fruit and berries, were easy to harvest. Until sugar became available, beet sugar was used to sweeten dishes used for dessert and pies. They also had plenty of time for food preparation, such as roots, dried meat, herb gathering and gardening but this was and is no easy chore.

Fire Side Cooking- Grilling/BBQ
Fire side cooking would be compared to Barbecuing and grilling as we know it today. We all know how delicious food tastes when cooked on the grill. Hillbillies and mountain dwellers ate this way all the time. Black cast iron pots and skillets were perfect for fire side cooking.
Modern Living exists in rural communities, but is not preferred.
Many of the people that lived in the early 1700's did not have the conveniences many of us do today. They lived and some still live that way because they like being away from civilization of big city life. Their use and knowledge of surviving off of the land with many skills we practice today, and how we consider them hobbies as Survivalists- such as foraging wild fruits, berries, roots, hunting and trapping.