A Dog of a different kind- Sonoran 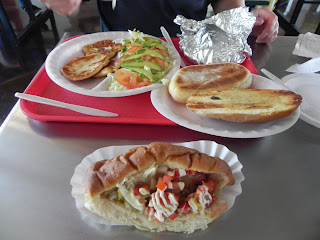 Sometime after WWII the hot dog made its way down to Mexico, Sonora to be exact. Then it came back across the border looking like a mummy wrapped in bacon (mesquite bacon!), cooked on the griddle, tucked into a steamed bun, covered with beans, mayo, mustard, jalapeno sauce, and tomatoes. So I had to try it, against hubby's taste buds of course. He does not like bacon as I have said before, but I made him go with me to check out the place where even Man Vs Food ate just barely a year ago. 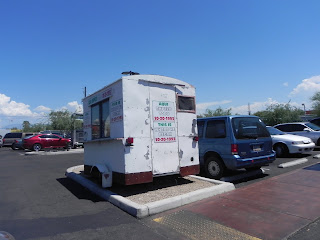 You drive around various areas of Tucson and see carts dotting parking lots like sculptures, and in many ways they are. Full of culture and food history they help make the lower class business man make a living in many ways. These carts are typically called 'dogueros', and over the past decade have become so popular there may be too many to count. We saw them in many of the northern part of Tucson, and on the way out of town heading southeast towards Elgin and Sierra Vista.

Food historians call it the Sonoran-style or Estilo Sonora hot dog. It originated about 20 years ago in Hermosillo, the capital of the Mexican state of Sonora. Street vendors sit and wait for the people to exit the clubs. Hungry, the masses gobble them up as a welcome snack from dancing and drinking before going home. 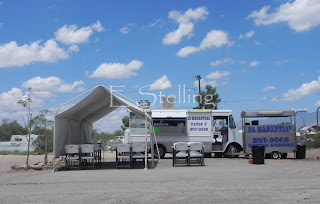 The Sonoran hot dog may take the phrase "with everything" to new heights, because it starts with a hot dog wrapped in bacon. Then you begin piling on the beans, grilled onions, tomatoes, mayonnaise, cilantro 'verde' sauce, and mustard. Just the thought of all this made me think twice about eating one, but after trying tongue and grilled octopus lately, I think I can stomach a few new ones. I am making mini-sonorans for an open mic cookout later this month, so I will let you know how they turn out!

They made it to California, but do not have all the 'extras' the Sonora dog has, and are called- “danger dog” (Tijuana hot dog). Some claim it originated in Mexico City.

I also found history on a hot dog from Austin Texas with peanut butter and bacon. My boss, winemaker Louis of Amalthea keeps telling me how good they are. I had never even imagined putting PB on a dog until he said something, and then I found this-

Party foods to rain cheers at an all-boy gathering are these frankfurters. They are plump ‘n meaty hot dogs filled with peanut butter and bacon wrapped, broiled and then served in frankfurter buns.

Slit frankfurters, lengthwise. Spread about 2 teaspoons of peanut butter in each slit. Wrap a bacon slice diagonally around each frankfurter and fasten bacon with toothpicks. Broil, turn so bacon cooks on all sides. Remove toothpicks and serve in frankfurter buns.

If you are counting calories, then a Sonora Hotdog has approximately 550 calories with all the toppings on it, and 340 of it is the hot dog on the bun. Fat grams and and sodium are high, so make sure you swim 60 minutes of laps or water aerobics, and make that 'Vigorously'! I did, and thank goodness hubby ate one quarter, but then I had one of his grilled chicken and corn tortillas with salsa verde.