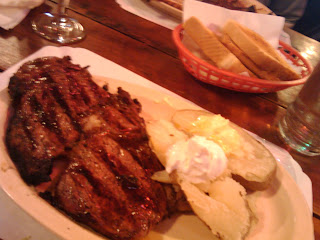 ...because, if I am around and in the mood, then I might take down a cow! Or steal your steak when you are not looking.

Growing up in Texas (not always the cause) and eating lots of beef I cannot seem to stay away from craving it on occasion. My eating lifestyle has become more of a Flexitarian. We alternate meat, chicken, fish, and hubby has to eat pork at least once a month, no more. I have mentioned during the week we eat more vegetarian, but when in Rome...or should I say Arizona, Sierra Vista that is...try this place out.

Driving along the beautiful country side of Elgin, visiting some wineries of Arizona, we kept passing these signs...but what was up with the fences, which made us laugh... 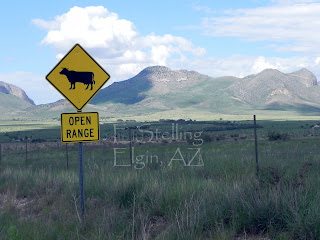 Now the Ribeye I had...was the bomb! (Hubby had ribs) Oh how it was smokey charred on the grill, juicy, Perfection! and yes, I had butter and sour cream on my baked potato, and a side salad. I uploaded a calorie/exercise application on my phone (MyFitnessPal), so now I can watch what I eat, and see how my goal of trimming will take place by January!  We ate light meals and dinner by 5:30...senior meal time, but he has to be on the base by 6 AM.

If you are in this part of the world, and want a great steak, visit Daisy Mae; it used to be a brothel, so they should know their meat...oh nooo, I did not just say that, LOL! 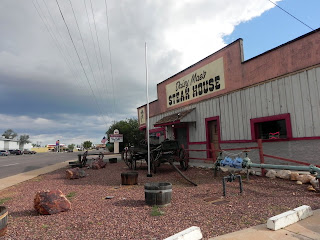 STRONGHOLD- Daisy Mae's Stronghold building is one of the, if not the, oldest building in Southern Arizona. She started out as a trading post in the very early 1870's, then became a U.S. Post Office, then a general store before being a stop on the stagecoach line. In the late 1800's it became a brothel for the soldiers of Fort Huachuca. There are still bedrooms there and the infamous "Charlie's Room", also known as the ghost room. Charlie was a patron during the brothel days and was murdered in a knife fight over one of the ladies. His ghost has been present at the building ever since, as numerous sightings and incidents have taken place.

Daisy Mae's building has been a series of restaurants for the last 60 years or so with the most famous being the G&M Stronghold until Daisy Mae's came along in May of 1993.

Daisy Mae's has won several awards since the original Daisy Mae's was established in Tucson in September of 1990. For two consecutive years it was selected one of the top 25 steakhouses in America by the American Academy of Restaurants and Steakhouse of the Year by the "Consumer Business Review" in March 1998.
Posted by Chef E at Monday, August 09, 2010