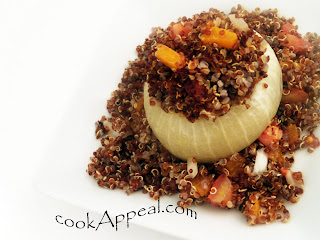 Okay, there is not really to many vegetables I do not like, and shade vegetables are some of my favorite!

This time of the year many things are at their peak, like when vidalia onions and apricots hit the market, and one of my favorite things to do is to stuff them! They are already one of the sweetest out there, but when you slow roast them with some goodies stuffed inside; then they become silken pillowy goodness'ess'ess...oh if you eat them then you know what I am talking about! 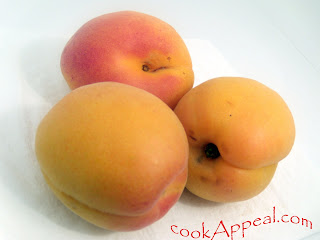 I have made quinoa and added apricots, along with pieces of the scooped out vidalia, tomato, seasonings, oil and some raspberry vinegar I bought in the Portland Farmers Market last year in the PNW vacation we took in September. Now read about my favorite onion...

I bet most of you did not know that the Vidalia onion is a registered, and trade marked produce? Well I guess if you are going to take credit in the south for something as good as my favorite onion; then why the heck not take it to this level...

The Vidalia® Onion story began over 70 years ago in Toombs County, Georgia. In 1931, a farmer by the name of Mose Coleman discovered the onions he had planted were not hot…they were SWEET! It was a struggle to sell the concept of a “Sweet” onion, but Coleman persevered and managed to sell those first crops for $3.50 per 50-pound bag.

In the 1940s the state of Georgia built a Farmer’s Market in Vidalia which greatly aided in spreading the word about “those Vidalia® Onions” which is how they got their famous name. Vidalia® Onions even began appearing on the shelves of Piggly Wiggly during this time as well.

Through the 1950s & 60s production grew at a slow but steady pace, reaching some 600 total acres of Vidalia Onions harvested annually by the mid 1970s. By 1977 the Onion had achieved such success that it merited its own festival. In 1980, the Vidalia® Onion official mascot was created; Yumion is a colorful character designed to appeal to children of all ages is a regular at area parades as well as nationwide events.

There are about 15 seed varieties of onions approved for planting as Vidalias® by the Georgia Agricultural Commission. The planting process starts by producing seedlings that are allowed to geminate in a controlled environment. Once enough of the seedlings been properly germinated, they are inserted into the unique low sulphur soil by hand. Georgia's 130 registered growers plant an estimated 15,000 acres of Vidalia Onions. A 70,000 plants are produced on each acre and are typically planted in 14 inch rows between 4 1/2 -6 inches apart. Irrigation is utilized to water the Onions when Mother Nature deprives the Vidalia® Onion growing region with needed rainfall. During the growing season temperatures average in the mid-50s in the winter and mid-70s in the spring and rainfall averages 3 1­2 inches. This combination produces a sweet, mild Vidalia® Onion with a somewhat flat top and bottom.

Harvesting typically occurs from late April through mid-June. The delicate nature of the Onions requires that they be harvested by hand. Standard practices in onion harvesting include undercutting the onions, allowing them to cure (air dry) for two to three days, clipping the tops and roots, bagging in burlap sacks, transporting to a warehouse, drying, grading, bagging or boxing, and shipping.

Storage & Handling
To preserve Vidalia Onions for a longer period of time, wrap them separately in paper towels and refrigerate.

Vidalia Onions can also be successfully stored in the legs of clean, sheer pantyhose with a knot tied between each one. Hang in a cool, dry, well-ventilated place.

Keep Vidalia Onions cool and dry at all times. 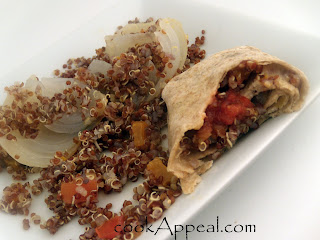 'They make a great wrap for a more filling meal, and you could even eat two of them if you wanted...'

Melissa Gaffney will be posting her interpretational video on Sunday, as she has been delayed due to deadlines in her new journalism post with the Princeton Packet...
Posted by Chef E at Thursday, June 04, 2009