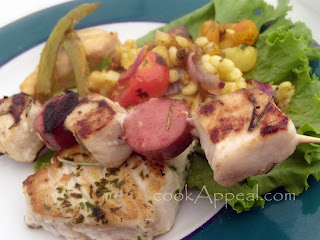 Lately, I have neglected to purchase or even cook fish as much as I did in the past. Being busy and not so great experiences with frozen choices such as talapia, scallops, and even shrimp has left me with a bad taste. Past articles talking about unclean living conditions overseas on much of the fish available in the grocery does not thrill me either.

I have decided that from now on I will only buy fish, shell fish, and other choices from my local fish monger, and cook it fresh. The best choice from my experience working in the food industry is purchasing from local fish markets, and go for the day boat choice.

Upon early arrival to Blue Point I was excited to find out that day boat marlin had just been delivered, so I requested some center cut steaks for entertaining. I also noticed salmon roe and some multi-colored white fish, or smelt roe in the case. Red, green, blue, and a similar salmon color were oddly lined up with a $4.99 an ounce price tag to boot. Cheaper than Russian caviar, and what a fun ingredient to play with!

Oddly as it might seem, fish, or smelt roe (can be listed as caviar) has color added, but it does not affect the flavor. 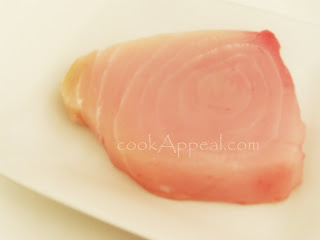 Choosing the larger salmon roe and the Wasabi flavored (green) white fish roe as an appetizer to go along with my main entree of marlin. I had the salad figured out, but some thinking went into the marlin steaks.

I searched through my books, and online. So many references on what to do with this fresh catch were all contradictory, and could have gone either way. Some of my reading said it tasted mild, and had a less delicate flesh that would hold up to high heats such as the grill. I read that it as soon as the fish was cleaned on the boat marlin might be eaten as sushimi, or is best grilled, but can have the texture and strong flavor of sword fish. One write up even said its strong flavor and tough as shark flesh had turned them off to ever trying it again. What was I to do? 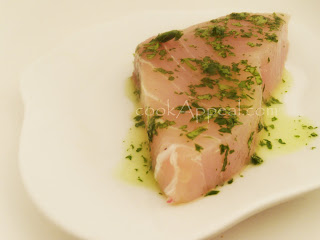 Could I show some skill in a variety of cooking methods, share my honest opinion to my readers all in one post, and give them the courage to go out and try marlin on their own?

Then it hit me, I would have a marlin menage a troi.

Handling the marlin I felt its flesh was firm, had no foul, strong odor or fishy smell, and seemed similar to tuna in texture. First a piece of the marlin was marinated in a cilantro oil mixture; then I would marinate and poach a few small pieces in an orange, ginger, honey, and soy mixture. The last piece I cubed and placed in a bag of rosemary, vinegar, and oil marinade. To kick it up I even threw some pieces of Italian hot sausage on the skewers. All sat in their baths for about an hour or more. 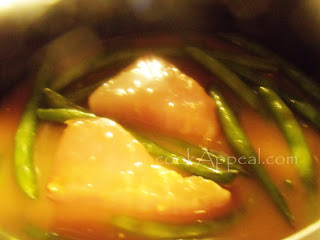 My feelings are that if you have gotten a fishy or off tasting piece of billfish, swordfish, or even tuna steak...maybe it was not fresh when it was cooked or served. I have eaten out with friends and witnessed their experiencing a bad plate of fish. This marlin was of great quality and freshness.

The fish mongers at Blue Point Fish Market off Nassau Street have never disappointed me. You will find a much more diverse selection if you are into trying new species, or fish that is common in your area. 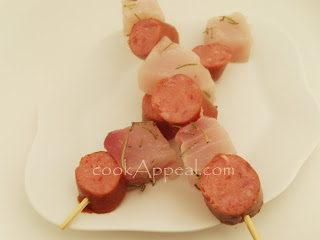 For some healthy veggie choices I poached string beans in the orange ginger honey soy mixture, and then made a Roasted Veggie Relish from grilled corn on the cob, heirloom cherry tomatoes, and red onion with coating them with the extra cilantro oil I had left. I roasted it all in the oven while the marlin marinated. What a great topping for the pan sauteed marlin. 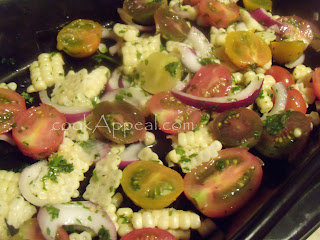 The judges decisions were in after all three were fired up and plated. No matter what they say, if you are going to poach, grill, or pan saute the marlin; its all good! You could use the same methods for tuna steak as well.

If you can purchase day boat goods, or even just fresh (not frozen) choices from your local market (as if it has been previously frozen; you cannot refreeze); then take it home and try out your own cooking methods. Remember to cook it while it is fresh, and never let it sit longer than overnight, or even a day longer than you should.

I recently, and in the past from restaurant menus have had harpooned swordfish (and was disappointed the harpoon was not attached as I had requested); it was a delicious piece of fish both times for me. 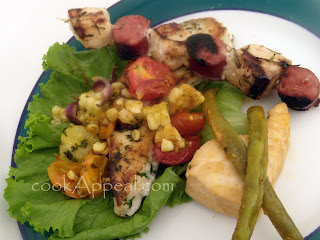 Marlin are rarely table fare, but on occasion can be found in fish markets. Mostly these cuts are on higher end restaurant menus. In Japan they are prized for being tasty sushimi. Most modern sport fishermen release marlin after unhooking. Expert deep sea boat crew have told us they fish for them in the evening hours, and use un-edible catch like bonita as their bait.

Marlin is recognized for its light pinkish flesh tone. Swordfish and shark have a white grey flesh color. I have heard discussions where people assumed they were eating sushimi tuna, because the flesh of the fish was pink, but as you can see in my photo above marlin is of a lighter hue. Tuna steak is a much darker pink, and deep red color.

Oh, and what about that Caviar Avocado Salad I mentioned in the beginning of this post? 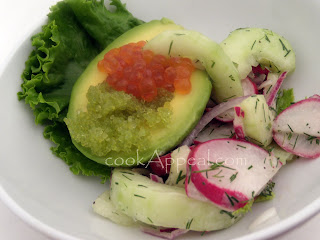 I cut up some garden fresh cucumbers and radishes, and filled the avocado with the caviar. Toss them with some dill and creme fraiche. The sweet, crunchy, and flavors of dill went well with the creaminess of the avocado and the saltiness of the roe.
Posted by Chef E at Thursday, August 06, 2009