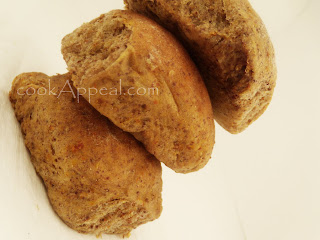 The Eagle Has Landed! Using the same recipe there were no problems with rising. With more time, and patience I have more dough than pocket change...

I am a little disappointed the picture of the 'Raw Goji Berry Cacao' bag was not in focus. With a busy day yesterday I only took one. Oh well the important part was the the bread turned out fantastic! Hubby could not restrain himself, and ate his fair share of some rolls as soon as they came out of the oven. 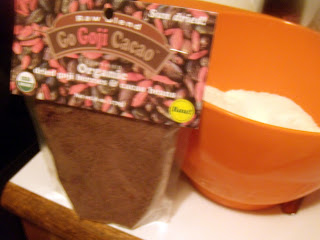 Picking this bag up on one of my travels at a health food store I have been trying to decide what to use it for. Angie @ Angies Recipes...Taste of Home has been using Goji Berries in some dishes, and has made me want to try them too. We eat them in salads and in cereal, and they are extremely good.

This raw powder can be used in so many other recipes like raw brownies, smoothies and other desserts, and I have enough to try something else! 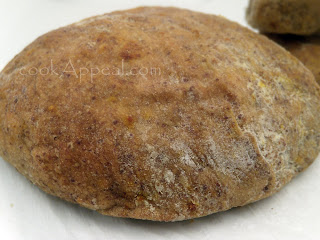 Take a closer look and you can see tiny dots of red from the goji berries (top), along with the nice buckwheat color and a few dots of the raw cacao in my hand formed loaf (above). I only added a 1/2 cup of powder per recipe. The cacao was not really dry, but had a small amount of moisture and clumpy; which I found out from a Raw Food friend of mine that it was fresh. Many Raw and Vegans would not have used this above 110 degrees in their cooking, but he said he wanted to try them tonight at the open mic I host.

There was not a lot of sugar added, so it gave the bread a faint chocolate flavor and smell. Perfect as far as I am concerned...with butter of course!
Posted by Chef E at Tuesday, August 18, 2009