Lets Talk Rice- A Walk on the Wild Side 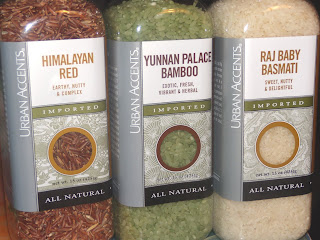 Let’s talk rice- A language I have now fully embraced... Fortunately, I have been a willing participant in a thing called 'Gluten-Free' eating; which rice is a part of my new eating lifestyle and can have a way of speaking through a recipe or dish of food in a way as simple as writing as Haiku poetry, or a beautiful song. I am however so sad about loosing the pasta choices I had before, but I know my health matters more. The red and white rice in the above photo were part of a gift package from hubby's step mother, Valerie. She so knows me! What a great gift...something I had not explored yet in my foodie adventures.

In December of 1997 it was reported that excavations of an ancient site in the city of Chengtoushan in central China's Hunan Province convinced archaeologists that under the ruins of the city wall lies a piece of rice field which could date some 6,5000 years back... I love history and find that definite proof that Asia introduced rice to our world by way of global trading throughout the centuries.

Many Asian dishes in our country (US) were introduced and adapted for our taste through immigrant that worked on the railways bridging the eastern and western United States together. Rice is a good source of protein and staple throughout the world still. Although it is not a complete protein, and is often regarded as a poor man's meal.

I grew up eating rice like many of you did, and it was common for us to consume it daily or a weekly basis as several meal replacements. Rice and beans remain a western favorite to this day. 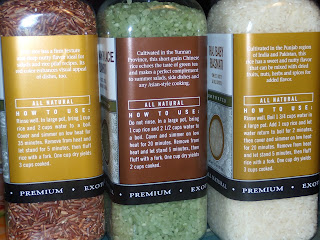 Rice is the seed of the monocot plant Oryza sativa, of the grass family (Poaceae). As a cereal grain, it is the most important staple food for a large part of the world's human population, especially in tropical Latin America, East, South and Southeast Asia. It is the grain with the second highest worldwide production, after maize (corn). Since a large portion of maize crops are grown for purposes other than human consumption, rice is probably the most important grain with regards to human nutrition and caloric intake, providing more than one fifth of the calories consumed worldwide by our species. A traditional food plant in Africa, rice has the potential to improve nutrition, boost food security, foster rural development and support sustainable land care. In early 2008, some governments and retailers began rationing supplies of the grain due to fears of a global rice shortage. 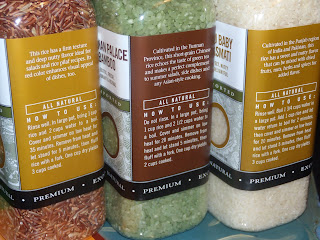 'If I had Greg @ Sippity Sup's talent with these babies and a video camera; then they would be twirling and doing the can-can for you, but they are slowly turning so that you can see them show off...'

Urban Accents: Yunnan Palace Bamboo- This short-grain Chinese rice echoes the taste of green tea and makes a perfect complement to any Asian-style dish where a bright color enhances the dining experience. 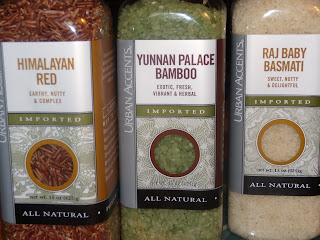 Yunnan food is what Chinese eat when they want ethnic is what I read in some online research. There's an emphasis on fresh herbs and unusual tastes, like mint. Or you can walk on the wilder side with food of the Dai people in Yunnan. There you will find lots of stuff cooked in bamboo tubes, rice stuffed in pineapples, fresh snake, and buckets of bile (not so yummy sounding, huh). 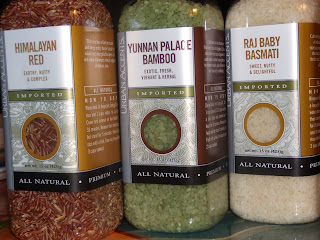 'I am going to make three unique dishes with each one of these special grains, and not what you might expect either...' 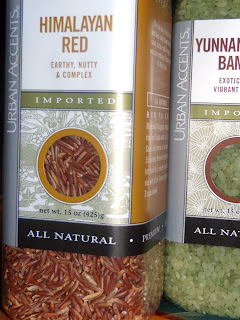 'On the last post I made this Himalayan Red rice with my Caesar Salad Tacos, and did not season it with anything but vegetable stock. No Salt. No Pepper. I let the cheese blend shells and the Green Goddess dressing communicate for the rest of its counterparts.'

Himalayan Red Rice has been grown in South Central Asia, in the Nepal area for many centuries. The rice paddies located in the foothills of the mountain regions produce the most aromatic red rice, and is also grown in parts of France. Similar in shape to brown rice but with a deep rosy color, it contains more of the natural bran than does the white version. For this reason it requires a longer cooking time, has a nuttier and more complex flavor and adds a texture to dishes unlike any other.

This is unlike Wild Rice which is usually used for species of the grass genus Zizania, both wild and domesticated, although the term may also be used for primitive or uncultivated varieties of Oryza. Originally wild rice was found growing in native grasses of the marshlands of North America and Canada, and is the most recent grain to be cultivated. Quinoa has begun to follow that lead.

This staple can be grown practically anywhere, but rice cultivation, due to its labor intensive value, is well suited to countries and regions with low labor costs and high rain fall. Parent species are native to South Asia and certain parts of Africa, centuries of global trade and exportation have made it common place in many cultures.

Due to the cultivating methods of flooding rice fields makes this a very 'Green' product; that is a growing concern all over the world and important part of our diets. This would not be cost effective to produce it in the United States, nor would we want another pest controlled product on the market. A simple method of sound planning and servicing of the water damming and channeling reduces the growth of less robust weed and pest plants that have no submerged growth state, and deters vermin. Flooding is not mandatory, but all other methods of irrigation require a higher effort in weed and pest control during growth periods. Not to mention fertilizing the soil.

Outside of Brown Rice or hulled rice, many of these varieties are healthier than the milled counter part, White Rice, so I highly recommend you try some of these other varieties. Any rice, including sticky rice, long grain, or short grain (such as risotto), may be eaten as brown rice.

Take eating healthy rice a step further and germinate your brown rice (GBR). Why do you want to do this? Because it's healthier and better tasting (I think) than the regular version! I'll discuss some of the health benefits and ways of making it on another post. Sprouted brown rice, GABA brown rice(for the amino acid GABA that is created during the sprouting), or hatsuga genmai in Japanese.

Risotto, also called Arborio rice from Italy is a high-starch (amylopectin), low-amylose round medium grain rice is used to make risotto. Such rices have the ability to absorb liquids and to release starch so they are stickier than the long grain varieties. Other grains include basmati of India, fragrant jasmine, and quinoa a protein rich seed of South America that was once grown by the Inca civilization, and almost lost. I have found so many varieties are available that I want to create an endless of recipes as seen in cookbooks such as 'The World's Finest Pasta and Grains', by Anne Marshall. She trots the glob, and especially Asia with an assortment of grain recipes.

I find that one of the most disturbing things about eating White rice here in the states is that we know it is buffed with glucose or talc powder (often called polished rice, though this term may also refer to white rice in general), parboiled, or processed into flour. White rice may also be enriched by adding nutrients, especially those lost during the milling process. While the cheapest method of enriching involves adding a powdered blend of nutrients that will easily wash off (in the United States, rice which has been so treated requires a label warning against rinsing), more sophisticated methods apply nutrients directly to the grain, coating the grain with a water insoluble substance which is resistant to washing. Not to be confused with the inexpensive versions of a parboiled rice sold and is referred to as 'minute rice'. Brown rice or its counterparts are a much healthier choice for our diets due to the nutrient and protein components.

HELPFUL HINTS: An Indian friend I cooked with back in Dallas, Christo, always reminded me that one of the most common errors made by the home cook when preparing rice with the absorption method is removing the lid on the pan frequently to check the progress of the water level. So it is important to keep moisture (steam) in the pan.

Do not stir the rice during the cooking process, because it releases starch from the rice, and it will become sticky. Either cover the pan while the rice is cooking, and forget about it until the time is up. I believe rice cookers are one of the best investments for cooking, unless you are making risotto, a high starch variety from Italy.

"My next post is 'Yunnan Paella'...and there is so much out there on this topic I cannot even begin to bore you any further" -E