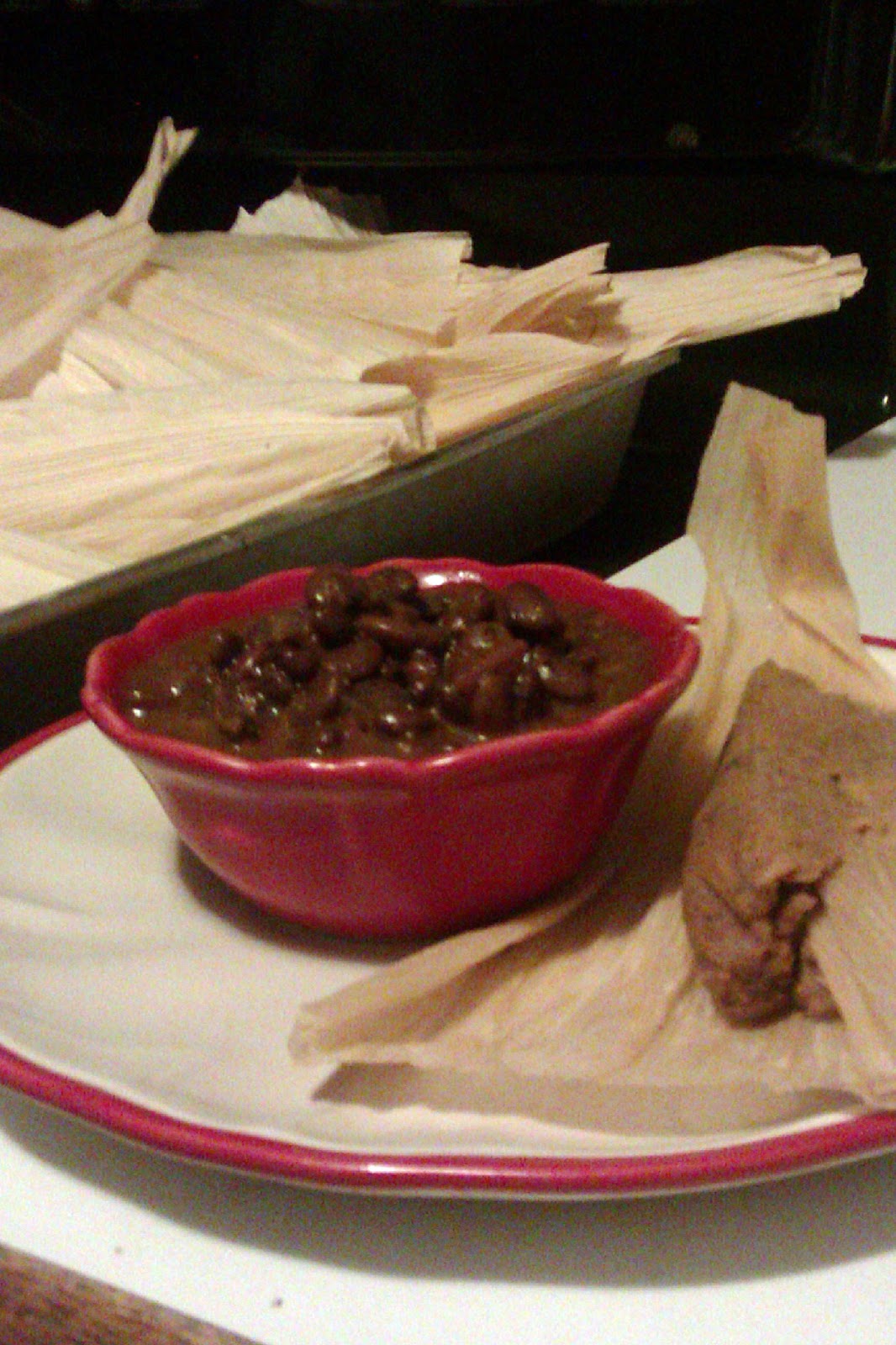 and Tepary bean filled Tamales...can go any way you like them. I have written about both before, because we love them. Making tamales can be grueling when you are doing it alone, but I don't mind...once a year. Back during the holidays I taught my son's girlfriend about he Hispanic tradition of making them for the holidays and put her to work! Ha!

I experimented with this batch. Some were stuffed with pulled pork, and some with chili Tepary beans. Using the sauce from the beans I flavored the masa harina, and used traditional lard. We made six dozen and gave family and friends six each for gifts. Frozen, these made a good treat for us once we returned home from the long family gatherings.

Never made tamales before? Plan ahead and have some friends chip in and you can all sit together and make them. I did this with a friend back in Texas for her family. Afterward she said it would have been too much by herself, as she had asked me to make a Costa Rican party for 30 people. So we made a Costa Rican tamale. You can find most ingredients in the 'International' isle of your local markets.

Tepary beans are considered heritage and heirloom and are available on-line and only in Arizona. Hubs travels there for work and makes it a point to bring me back a bag of black, white, and brown. They are lowest in glycemic index of all beans, and one of the best things to eat if you have high blood sugar issues like diabetics. Check out this recipe for Tepary Beans and a Hungry Chef!
Posted by Chef E at Thursday, February 28, 2013 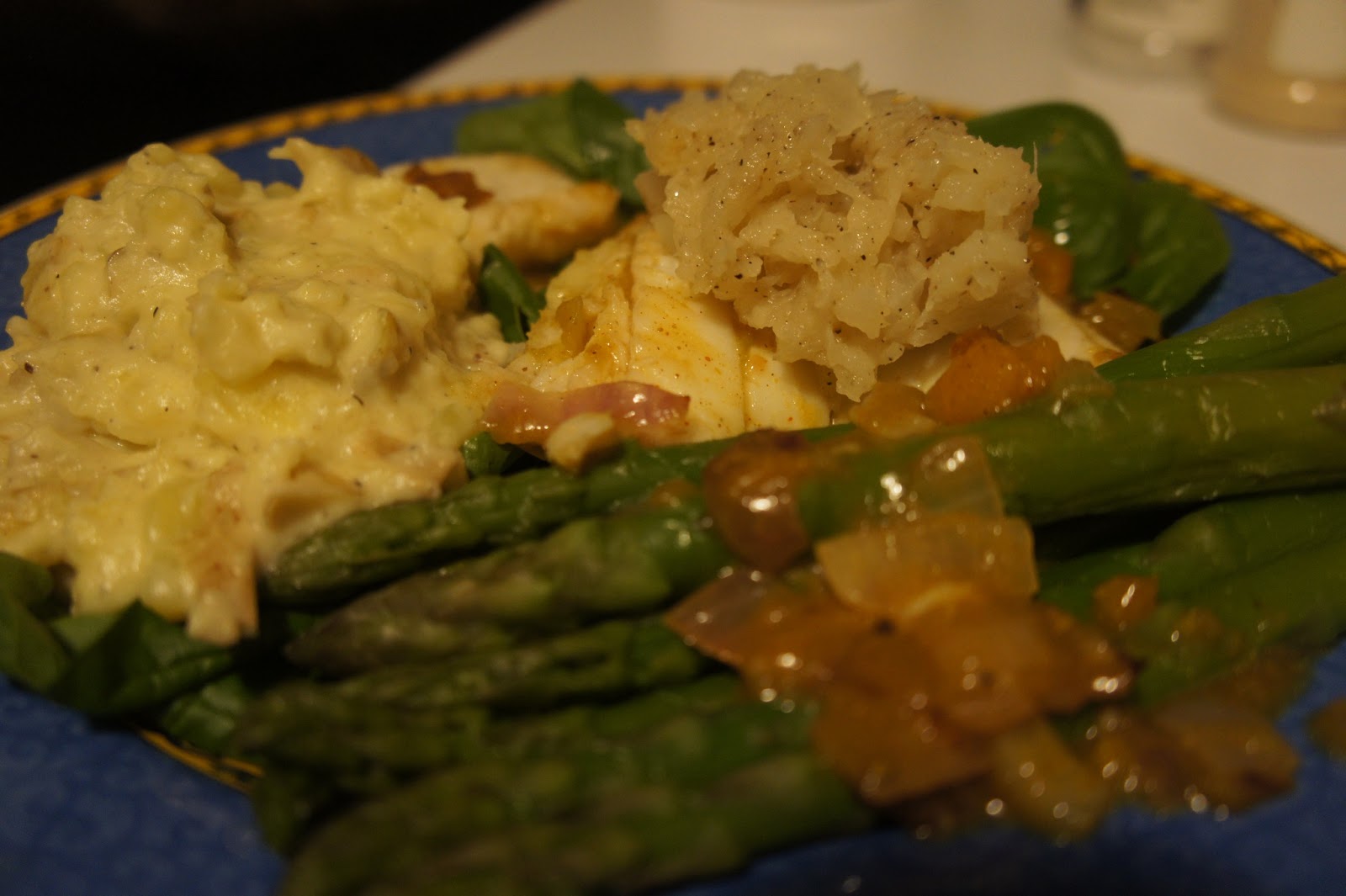 What do you make your sweetheart for Valentine's Day?

Mine is complicated. He likes obscure foods. He always has, since we got together 15 years ago. However, I like that. Because I like to experiment with flavors. It says so on my bio to the right!

The story of this dish goes...

While at the local Whole Foods store one Saturday, hubs is rummaging through vegetables and I see him asking a store employee something. I walk over to hear him asking about Salsify. She has,  no clue, he has the smart phone pulling up a pic, she is asking other employees if they know what it is. One guy points him to another similar in looks root, but it is ten times as big. But they all get no where.

I have made this dish before, written about it before. I have also read it does not taste or smell like its alternative name 'Oyster Root', but it does. You have to get it fresh. If you pick it up and it flops over or feels soft, then it is not fresh. Firm and stands like a pencil. This parsnip, potato like root does have a subtle smell and flavor of oysters. Someone might steer you the wrong way and point you to parsnips or some other 'like' root, and then it won't have the aroma.

Salsify usually comes out in February around here (maybe late summer/warm winters), one site says October to January. It comes in white (yellowish) and black, I have only seen black version, but inside resembles parsnip. Even the white version can look like parsnip, kind of. But the most important thing- it tastes similar to oysters. A mild version. Haven't had it? I encourage you to try it. I boil it in a stock (save the water), mash and chop it up; add white wine and butter, along with salt and pepper and maybe a sprinkle of garlic powder. Don't use fresh garlic or you will mask the true flavor.

If you look on the top of the turbo filet, upper corner and right hand side of picture above, that is then end result. Forget the creamed potatoes on the left; it is a pile of mess, but tasty. The whole dish was tasty. Another trip to Whole Foods and I saw they had gotten some in after our last trip.

Where does the real love come in? I hauled myself out of the house on a cold snowy day a few days later to go buy another handful of salsify so I could cook it for his Valentines Day, because he adores it. Four pieces make about 1/2 cup...not much, but a great garnish for seafood.

PS- here is a pic from the internet


I almost forgot! The salsify water...I reuse it for sauce or gravies. You can freeze it or incorporate it into the next days meal. We are watching (always) our carb intake and such, so no extra sauce calories, because I was craving mashed potatoes this go round.
Posted by Chef E at Thursday, February 14, 2013 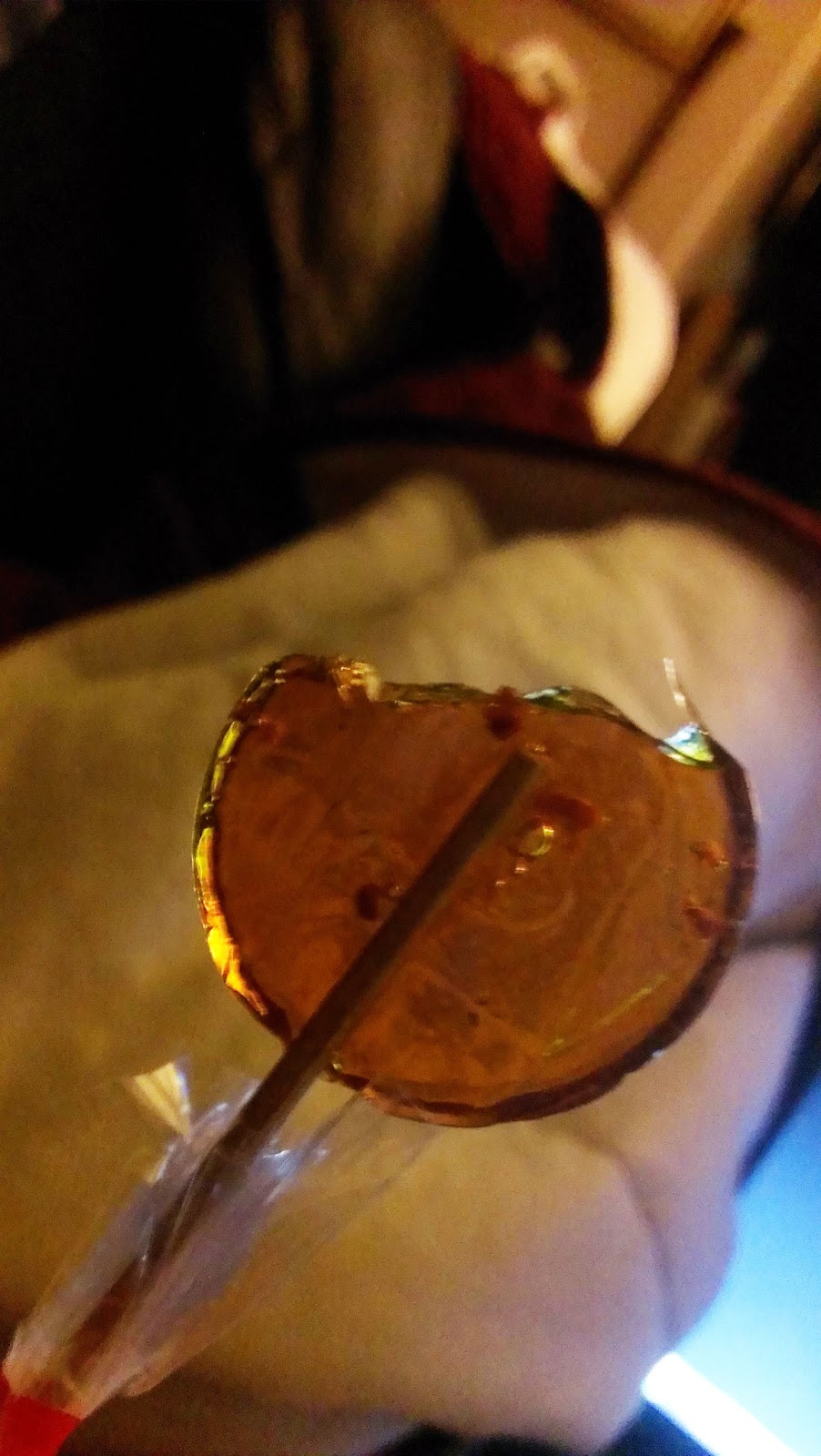 My review- cute packaging, but no maple flavor in smell or taste, just sugary. And the bacon added an old (sitting on the shelf) oil flavor rather than a bacon taste. My son nor I went back in for another taste. The bacon bits linger way too long...

Four come to a package, a great novelty gift, but nothing I would recommend. Hubs thought it was something fun since I like bacon. I have had chocolate with bacon and it was fine, but we are not sure how long these have been sitting on the shelf because there is no date.
Posted by Chef E at Sunday, February 10, 2013