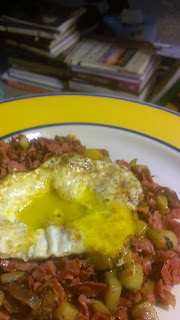 Deli cooked corn beef chopped with potato, carrots, and onion. Throw second part(s) in a hot skillet, cook until potatoes and carrots are soft, and onions are browned (remember mirepoix lesson in culinary class?- all even sizes for even cooking). Then add beef, just to heat through.

Do not salt, the corn beef is salty! It's a hell of a lot better than the canned stuff (or is it?), less salt, at least I hope.

Oh and I've been told the Jewish deli corn beef works better than Italian, so we gave it a try.

Ahhh the things my son does in our pretend test kitchen to make his mom happy on a busy weekend morning publishing books- yes, we (hubs and I) started a new business this summer. Red Dashboard LLC
Posted by Chef E at Monday, November 11, 2013 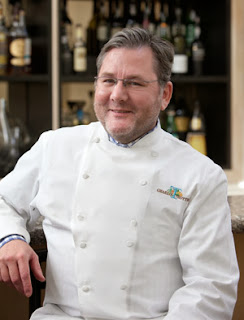 I am deeply saddened by the death of one of my culinarian gods, Charlie Trotter.

Death hits me extra hard since my daughter and parents passed away, years ago.

The last time Robert and I saw Charlie, he was happier than I had ever seen him (while working- Trotters). He introduced me to his mother that day. He was bouncy, smiling, and kissed me on the cheek with a good over the shoulder hug. Normally, he never did this; he was driven, a yeller (which I never liked in the kitchen), but people respected him. He never let you drink hard alcohol before a taste and a good meal to boot, because it would desensitize your taste buds to flavor.

It was a privilege to have known and worked with him. In the early 2000's, before moving to NJ, in Dallas while working for the culinary school I often helped other chef friends do charity events, The La Toque (Epilepsy Foundation), Cook-offs (BBQ and Chili), and anything we could get the students involved in for experience. It was just after my oldest child passed away from heart disease, and I needed distractions.

Charlie was at a distance from me while we all were setting up in the afternoon in downtown, and I was put in charge of the wait staff for a 700 seated dinner. He came over next to me to get something, I was slicing paté and he suggested I go in closer with my finger to get a more precise cut (lots to feed that night). He stood there (making me nervous) watching as I worked, but patted me on the back once everyone was done that night. All the top chefs that night opened champagne and insisted we all toast to pulling off a great night. It was fun, because I was around many big names that night and expedited a lot of food off to the wait staff. Volunteering is a great way to learn the trade.

Each time I saw him afterwards he said hello (which I know is silly, but it meant something to me as a fellow chef), but still always so serious. He saw me and recognized me in Austin, and offered to sign books during a busy night, two my husband and I carried with us just in case we got a moment with him. I even had the privilege of him getting upset with me, which he was known for. I shook it off, because the next time I saw him in Chicago he more than made up for it.

I did feel, do feel, that often people are so driven they forget to enjoy life, then it is too late.

I only wanted Charlie, I want you all to be happy while doing what you are passionate about.

Someone, I forget whom was quoted, said "Heaven will eat better now that he is up there."
Posted by Chef E at Wednesday, November 06, 2013