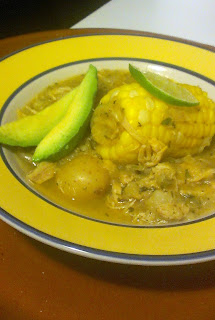 After returning from Colombia, South America my son announced he couldn't get enough of this dish. He described it as being different in varied cities around Colombia (mainly indigenous to Bogota), but he wasn't sure what the ingredients were.

"Possibly potato soup of some kind with chicken" he described.

I found various recipes, even one site I was familiar My Colombian Recipes.

We had to order the seasoning- guascas  an aromatic herb that looks like basil in its natural form. 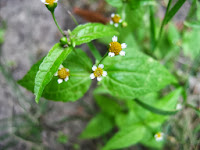 A chef friend joined us in making this dish, as she herself has been to south America and loves the culture, food and language. It consists of three types of potatoes, chicken, guascas, and alternative garnishes- sour cream or creme fraiche, capers, avocado, corn on the cob, and other.

The flavor was distinctive and good.

We did not have all of the ingredients but will be making other variations of this recipe!

Here is the recipe I followed- Serious Eats, minus the aji (cilantro based sauce) because it can dominate the taste buds, and the chef in me wanted to let the guascas come through. We held off on the capers as well, same reason, to get a handle on the flavor of a dried herb, reconstituted through boiling.
Posted by Chef E at Monday, October 21, 2013