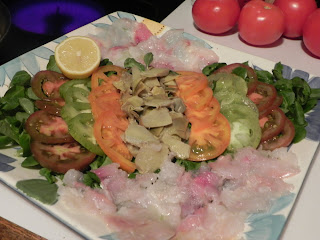 Summer is officially over since last Friday, but not for many ingredients at the market...

One dish I had not tried to tackle yet, key word yet- seafood carpaccio. We love the beef version, and have had venison in Italy, but for some reason I have not tried fish version at home. Because it's really easy to make!

I infused 1 and 1/2 cups olive oil and 2 tablespoons butter with (1) lemon grass (cleaned and beaten with mallet), sprigs of cilantro, 2 cloves garlic (mash with mallet), tablespoon sea salt and squeeze of half lemon- after heating it to about one hundred and eighty degrees (check with candy thermometer, or butter will burn). Put aside and let the ingredients do their thing. Strain and use as you see fit.

Rub this mixture into the chilled plates. Then cover with the very finely sliced raw monk fish and hake filet and sprinkle the fish with the remaining infused olive oil mixture. Make enough to drizzle on salad mixture as well.

I sliced heirloom tomatoes and artichokes into thin slices as well, placing them on top of fresh mache salad. Place the carpaccio around edges and serve as an appetizer. We were almost too full for the main course, and thought it would be a great entertaining dish for next time.

Place medium pieces of sliced fish in between plastic wrap and gently pound with a mallet. Don't worry if the pieces do not come out perfectly round, and the tenderloin area of the fish is especially fragile. The monk fish worked best, but the hake had the best flavor to me.

Enjoy! and serve with a Gruner Veltliner, or an un-oaked Chardonnay to compliment the texture and acidity of the fish. 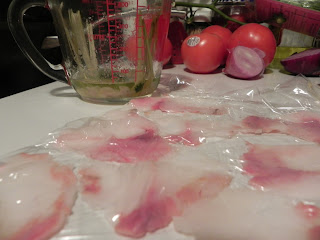 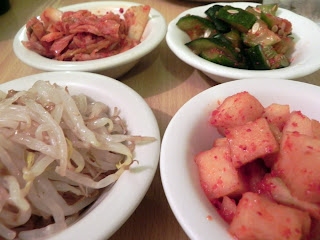 Hubby had to go a short distance out of town for his work, I tagged along, we found this really great in the middle of no where Korean restaurant. Great family owned and operated and fantastic food. The selection goes from a few classic Chinese, Chinese-Asian fusion, and Korean Classics. 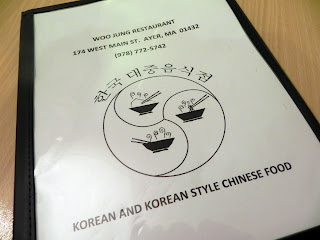 My advice though, the portion sizes are HUGE, so be careful how much you order. If we had  been staying in a hotel with a kitchen, we would have taken the left overs back to reheat. 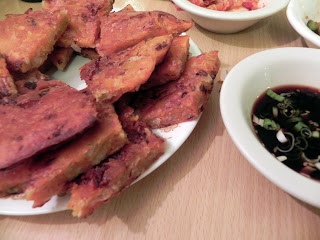 We ordered Kimchi Pancakes (my recommendation above!), BBQ Squid with mung bean jelly noodles (transparent cellophane noodles, hubby's top choice), and a Pork-Tofu Cabbage Soup with rice, which was good and they also used Kimchi as an ingredient. 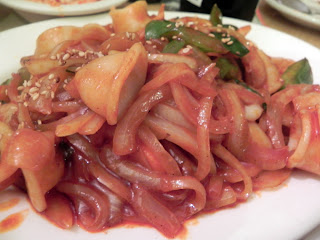 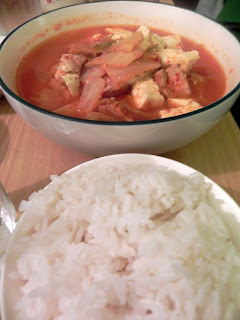 Everything was so good, and the place is a BYO, and we did! I would return if we have to go back again. They have dishes I have made myself at home like Belgogi (spellings differ- bulgogi, or pulgogi) selections, and Bim Bim Bop (vegetables either with beef, but always with egg on top). 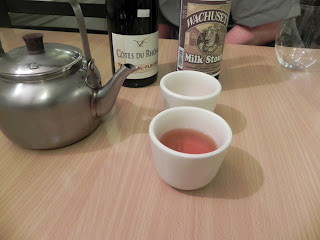 Okay, hubby wanted me to take a photo of the damage we did. We still could have used a few more eating partners to knock it all out. Like I said the portion sizes are huge and prices are very reasonable! 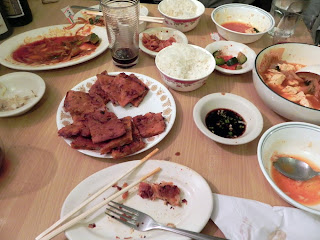 If you really want to do traditional Korean dining, they have this table were you sit on cushions on the floor; it's off to the side when you walk in the front. 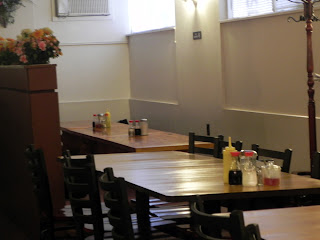 Now, for more exciting news... I'm going to Korea (and other countries around, Tokyo) to visit my son for a month!!! So hang onto your Korean hats, I will be posting off the beaten path recipes and restaurant adventures!

Find me on facebook- Elizabeth Akin Stelling, otherwise I will continue a 'Comments Disabled' until further notice, 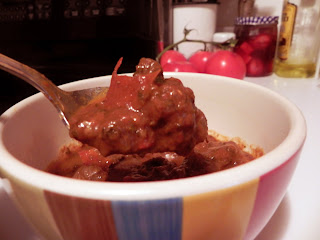 This is the last bowl of chili left from my latest beef and chili pepper cravings. I can smell it as the bowl is right next to me. If you like chili con carne the way I do, then you can smell that distinct ingredient blend too.

As a child growing up in Texas my father would make homemade chili as often as every or every other week. We would eat this with crumble saltine crackers and chopped onions. Now and again we would have it on top of hot dogs. My father loved chili. Once he learned the recipe for the authentic Chili Queens of San Antonio chili, we all were hooked. Cheese Enchiladas with chili con carne are a favorite too, and often served in Texas Tex-Mex restaurants.

Canned chili just cannot top this recipe. However there was a brand you could find on the shelf every now and then, before Wolf Brand and Hormel began dominating the market that came as close to a homemade version; it was Walker's Red Hot Chile Con Carne, produced in the Austin, Texas area for nearly seventy years. They are also known for chili powders. Does anyone else remember this company or brand?

Here in New Jersey they make a sweet (bell peppers) chili with kidney beans. I refuse to say it is chili, and will not even try it if I see it on a menu.

To get that rich and fatty meaty chili con carne of my youth I make what I call Ribeye Texas Red. Many of my friends here in New Jersey love this recipe. I use two types of dried chilies and fresh tomatoes to make that rich spicy sauce. Cutting up Ribeye could be sacrilegious to a die hard meat eater, which up here in the north east can get expensive. I know at least one blogger (Nibble Me This) who is cringing, because this great grilling steak is being massacred like an old western, but hey don't knock it until you try it!

Just for fun history, here is the Walker's recipe-

In 1918, Walker Austex was producing 45,000 cans of Walker's Red Hot Chile Con Carne (with beans) and 15,000 cans of Mexene Chili Powder a day in their new factory in Austin, Texas. But Walker had already been selling canned Mexican foods for over a quarter century and may have been the first to can chili. Gebhardt's didn't start canning chili (as opposed to making chili powder) until 1911. Walker's 1918 recipe booklet had recipes for "chile huevos" and "chili mac" -- plus something called "combination chili con carne" -- one can chili mixed with one can tomatoes.

1 lb Ribeye cut into small cubes, or as close as you can get

In a medium hot pot begin sauteing 1 medium yellow onion, small chop
2 or 3 tablespoons oil of your choice, I use olive oil, but authentic recipes call for...

Begin browning beef (some recipes say small batches due to moisture being release in large batches, and not browning properly) I use the same pot and brown onions and beef together, your choice.

Reconstitute peppers by adding them to boiling water and letting sit for up to twenty minutes (I often
remove half of the seeds, and always the stems, to cut down on spice for guest).

Puree chilies in a small portion of the water, maybe 4 tablespoons and add them to the pot.

2 pounds of tomato puree (with summer tomatoes in abundance I use fresh, or 'put up' jars in cooler months)

4 cups beef stock, begin with 3 cups and add as it simmers down, if liquid becomes to thick

Simmer for an hour or so, and as I always say, dishes like this always taste better the next days to come, so make it a day ahead.


My recipe complies with Texas law (which prohibits making chili with beans).

I also do not add the Masa Harina which takes the place of tomato paste. I like my chili somewhat liquid, as we always add whole wheat (high fiber) crackers which do the job of thickening quite nicely!

Note: I felt the heat was not up to my liking so I added another 2 chopped reconstituted chilies after tearing them into small pieces. Several friends noted they like seeing the chili skins in the bowl, made them feel it was more authentic.

Want an alternative recipe? Lamb Chili made with my Chai Tea recipe
Posted by Chef E at Wednesday, September 14, 2011 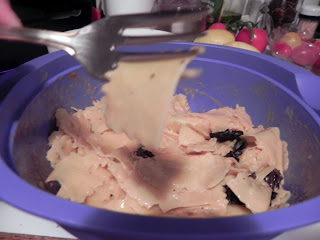 Maltagliati pasta are flat, roughly cut pieces of pasta produced as random shapes from the scraps of pasta being cut and formed for another variety of pasta. Or it can be pasta that is intentionally cut into a formed shape, similar to a trapezoid or a parallelogram. Maltagliati pasta is often used in minestrone soup or in others recipes as pasta e fagioli.

Often these packages of stray/broken pasta are seen in Italian or gourmet markets and can be quite tasty with a finish of herbs and olive oil. You can also create your own maltagliati after making lasagna or your own pasta at home. This pasta was sold as 'pasta all'uovo' which means 'egg pasta'.

Another Italian goodie which has made its way into my kitchen. My sister visited this past July and we took her into NYC for a few days. While having an eating experience at Eataly-il Pesce we saw quite an array of pasta and fresh foods. I have made this variety before, but not quite such a thin version. You could tell by the crinkled edges they must have been lasagna noodles at one time, but yet they are so thin. They soaked up the flavors of my homemade vodka sauce mixed with wood ear mushrooms. After rinsing the pasta in cold water I tossed in the other ingredients. A great lunch snack before we took a swim.

We picked up fiddle head ferns (which I found odd, since they are usually out of season by then), wood ear mushrooms (often found in hot and sour soup and stir fry's), and farro, orzo, gunaciale, black truffles, Italian cheeses, sauces and many other types of pasta for hubby's eating pleasure! 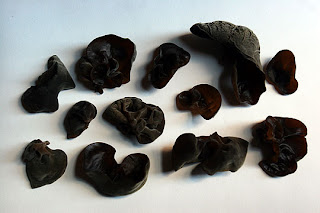 (wood ear mushrooms sold by the pound at Eataly)

Another wonderful purchase and eating experience from Eataly-


Black Rice from Venus, The Goddess Of Love