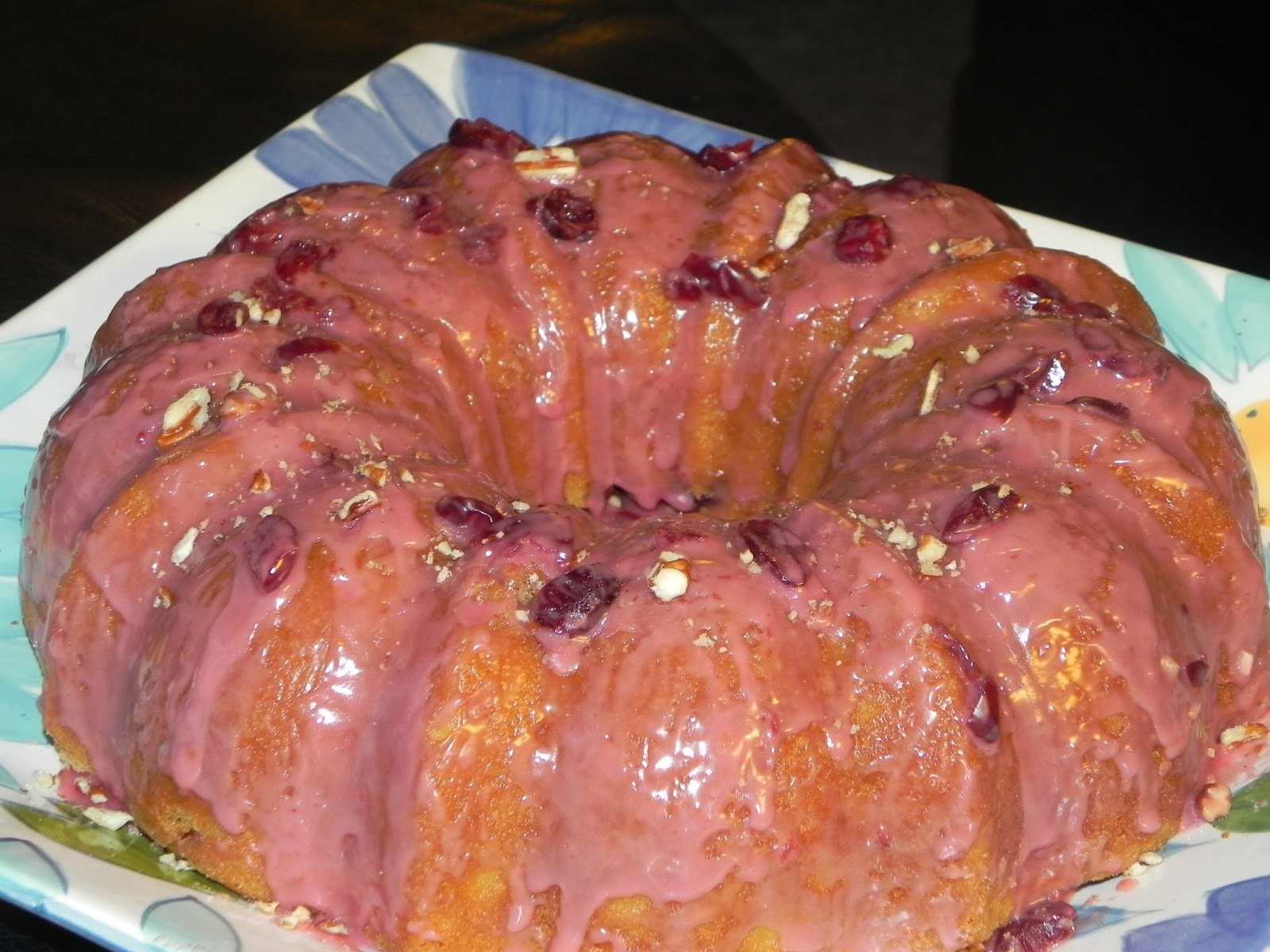 You can find the recipe I modeled this cafe after Lemon cake found on Martha Stewart's sit, with my own addition of reconstituted cherries in a glaze and pecans. Now remember I did not frost the cake, only glazed it, and found brushing it on was the best trick I have ever learned; it went on as smoothly and very evenly as it could cooling I might add, and soaked in well. Frosting would be too much for this cake.

We also found letting it sit for a whole 24 hours before cutting it, well I had a nibble to see how it tasted, but the following night everyone found it to be wonderful. And not too sweet.

I recommend reading through these instructions before starting...

Mix together and let sit overnight or about an hour (this mixture works best if warmed up a bit in microwaved or on stove; the heat will help reconstitute cherries- microwave for about 46 seconds on high- stove, warm liquid and add dried cherries, remove from heat quickly.)

5 Spices Beneficial To Your Health 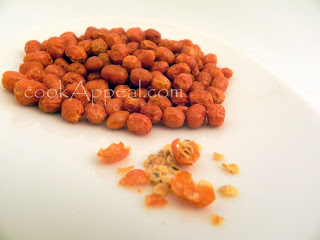 I  often clip magazine hints like this and save it in a recipe book for future reference, and wonder years later how it helped me and if it still applies. Many of my Asian and Indian friends here firmly believe they do help you, and have so many more suggestions such as eating anise, coriander, and other seeds help with stomach ailments and digestion. They often make teas and use them to make dosai and dals. But here is the original article...

These five hot spices can be good for everything from easing arthritis pain to keeping your heart healthy.

Recent studies suggest that when it comes to cuisine, kicking it up a notch can be as good for your health as it is tasty for your palate. Some spices, particularly hot ones, contain phytochemicals that may help ward off cell damage associated with chronic diseases.

Potential health perk: Protects against Type 2 diabetes and heart disease. A 2003 study found that about half a teaspoon lowered blood glucose, cholesterol, and triglyceride levels.
Hot way to dish it: Mix half a teaspoon of cinnamon into your coffee, or jazz up whipped cream with a couple of pinches.

(Above photo is a handful of dried chilies from my tepin bush my sister grew for me in Texas. Plant is native to Mexico. I've heard them called chile pequin, turkey pepper, bird's eye pepper among some of the other names. The wild pepper is a small round pepper growing wild in Mexico. )
Posted by Chef E at Saturday, January 19, 2013

Scallops Are The Bomb 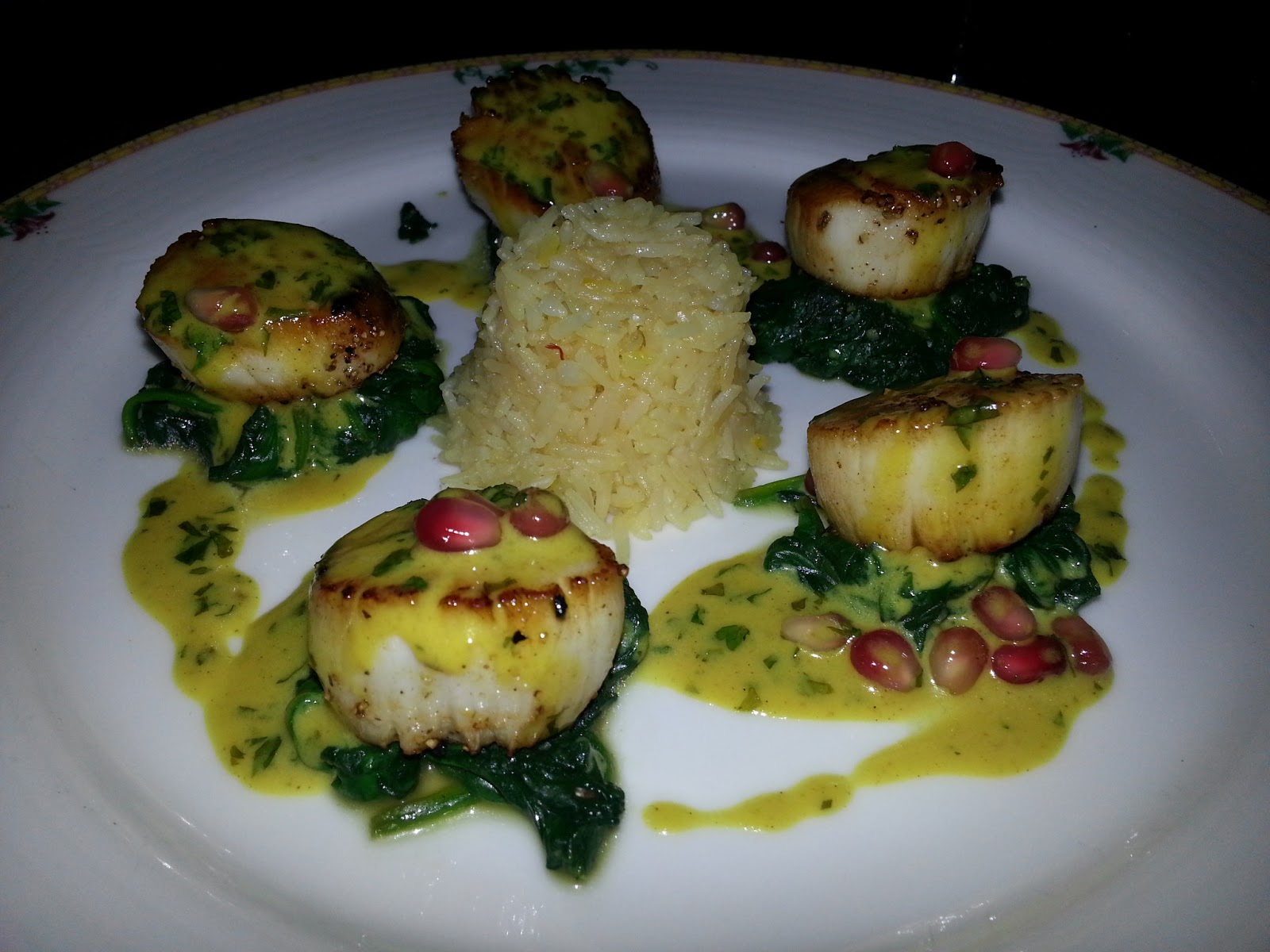 Oh heck, keep the old, just do some revamping...and we do love our scallops!

I was hired to cater a dinner party for my clients husbands boss. The wife left the menu up to me. I like it when that happens.

Salad for the beginner, and no big dessert for the finish, just an assortment of candies and truffles. I was sure most were spent on the Christmas end of sweets as it was. A light meal was in order. I went with scallops, and filet Mignon as the meat option. You would be surprised at how many said no to the steak.

(I did get a grand deal on a tenderloin at H-Mart in Edison- $6.99 lb. Other locations available. It was cheaper than what I can get at the wholesale butcher, and you have to buy a certain quantity at that. I prefer Rib-eye steaks for more flavor, or a strip, but often high end clients want filet.)

Pan seared with a little salt and pepper. Over sauteed Parmesan spinach. I deglazed the pan with a tamarind infused heavy cream. Added room temp pomegranate seeds, and dusted it with some curry powder.

It tasted wonderful, and was paired with two Chardonnay's- oaked and steel barrel fermented, both from Long Island.  You might think the oak would overpower the dish, but it actually highlighted the light curry powder dusting. Guest felt they both were a good match.

Regrets- my rice was not flavorful enough. I often overdo everything, and had considered a risotto. But that is usually too creamy for a solid presentation. Not because I was criticized, but because I personally like everything to shine in flavor. The clients and even hubs in our trial meal said it was fine. In retro, the meal was fantastic, and I want it again! However...see there I go again...I felt it needed a bit more curry powder, but I like my food spicy...

I don't carry my camera around as once did a year or so ago, so the smart phone photo has to do when a quick expedite is in order.

Next play with your food meal on my menu is smoked Duck...

Happy New Year with some Pea-zazz! 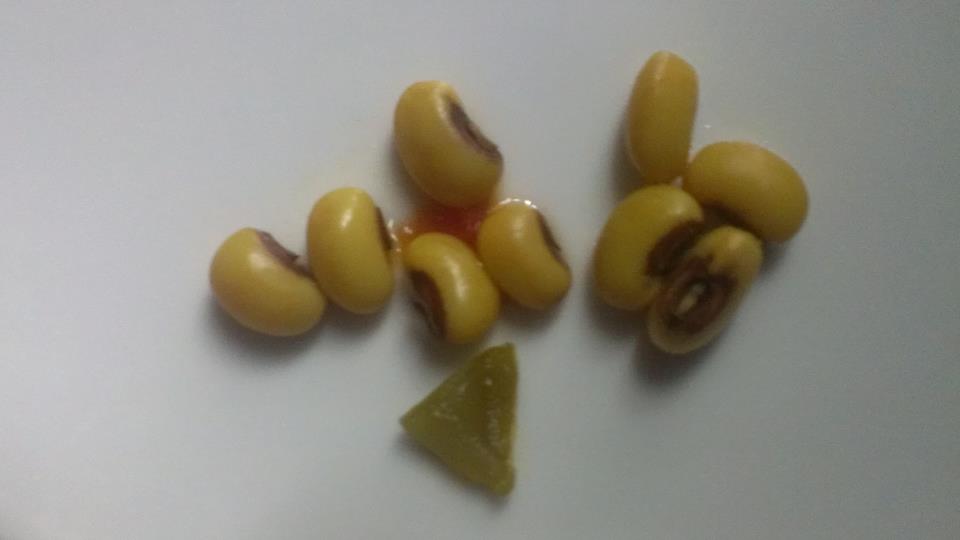 I grew up eating black-eyed peas on New Year's Day. A southern tradition. Once I went out on my own I developed a taste for spicy everything, so chilies found their way into the pot. My grandmother made them in the pressure cooker with snap beans and bacon. I went a little north on mine.

Bacon, can of green chili tomatoes, frozen black-eyed peas and Italian flat beans, stock or broth, and a heaping tablespoon of Indian Tava Fry or Kitchen King powder, for that extra slam of heat. Then boil it on the stove until peas and beans are tender to the bite. I never measure unless its for a client, and they have given me instructions for something special. But it will all be good in the end.

This year I made a Sambar soup base and added everything but the bacon. Can't find it. Two different people in my house went shopping without telling the other, so my freezer is a war zone. I will deal with that later. You can buy Sambar seasonings in the box just like the other named spices above. And mash up some of the peas after they cook to thicken the soup base. I would add lentils if there were any in the cabinet. Hubs gave the thumbs up after eating a bowl, and he is not a fan of my concoction. Black-eyed peas are an acquired taste.