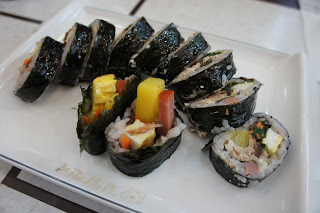 With my family touring Korea we often had versions of sushi and local students would say the trend started in their country. I am not totally sure, nor an expert, and what we had was not what you have had in America. It looked like Japanese sushi, but a variation.

Most of it is served with a spicy red past, sometimes wasabi was siting in your side dish waiting for soy sauce, and always with their own fermented sauce (made in jars), which is lighter and not as salty.

My son dragged us down the street from his apartment to have what he kept calling Kimbab. The spelling is different that what we were hearing as he said the name, Gimbab (G is the 'K' sound, and bab or bap is always rice).

Basically it is Bibimbap wrapped up in Gim, or as we know it Nori aka dried sea weed. They brush it with sesame oil after rolling it. The photo above shows Gimbab, often spelled Gimpap, made by the woman here. 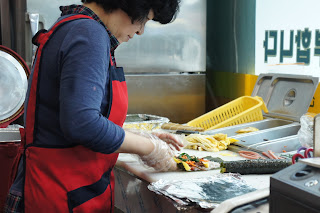 Around the coastal towns haedobop is eaten in a bowl like it's cousin dish bibimbop. All the ingredients found in sushi or maki rolls, but on top of the rice. Usually fish or the 'hae' is the last ingredient topped off with minced garlic and a spicy fermented paste called gochujang.

Like bibimbop you stir the ingredients together adding more spicy red paste (looks like ketchup, and sweet). We had this in Jeonju, just outside of Busan near King Moonmo's sea side burial place. They often us tilapia, which is kept in fish tanks, and very fresh. You literally watch each restaurant cut the fish up on the spot..

This was my favorite the whole trip. Why, because of the fresh greens and salad, rice was served on the side. Many times Korean dishes like barbeque were served with lettuces and ggaenip leaves for wrapping, so this was a nice change. Most all dishes are served with banchan or side dishes, most often variances of kimchi and other pickled dishes. Each restaurant uses their own recipe for these sides, and I found some to be very spicy, but good. 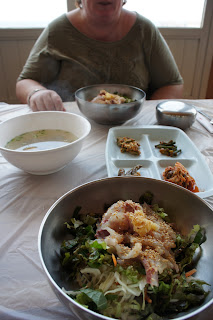 Korean rolls (or kimbab) above in photo of woman rolling, are much more robust than Japanese rolls. The ingredients are usually fully cooked, the rice is either unseasoned, or seasoned with sesame oil/seeds. The ingredients will include all sorts of things like pickled daikon, fried or steamed egg, seasoned meat, sauteed julienned vegetables such as carrrots, mushrooms, fish cakes. Very hearty fare. It is tasty, but very different than Japanese maki. They are served with kimchi and soup or 'jjigae' or guk. A spicy red paste broth with seaweed and thinly sliced onion and zucchini, and  most often has soft tofu as an ingredient, lots of it known as Sundubu jjigae. They have many varieties of soup, which I enjoyed.

Below is a version of bibimbop where the egg is cooked on the side of a hot bowl. Next to it is the spicy paste. We had this in Jeonju for dinner- known as a popular bibimbap eating experience.

Traveling to Korea can be a bit of a food shock. Most Korean restaurant menus do not have English translations, so you might want to learn some Hangul, Korean. It helped my son has been there a while and translated as we went. There are western restaurants, but most have their own versions of our food, even chains like On The Border. Which I found the salsa my son brought us did not taste at all like what I know here. I found adjusting to their food a bit harder than other countries we have traveled. 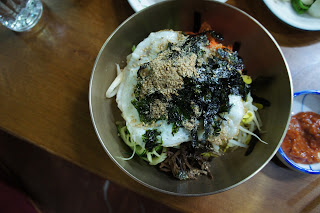