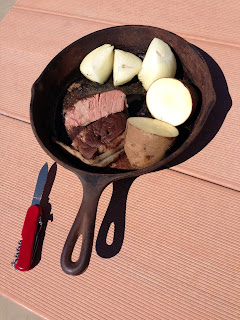 Yes, this is really a dish. Why? Because my husband goes away on business and one night he told me the most amazing story on the phone. A co-worker was cooking food for them on the dashboard of his car. I would not have believed him, but they were in the desert and temps can get really high during the day.

His co-worker took a skillet, placed prime rib and on one occasion filet mignon with potatoes and onions; then places it inside his car on the dashboard facing the sun (it is already hot in the desert location, so we know cars can reach even higher temps). I ask him other details (I would not recommend this at home or any other location) about temps and so on. I was told the meat was fine, but the potatoes on the first try were undercooked, but the the meat and onions tasted better than something they had for a meal the night before.

Hubs said there was a thermometer involved and he is still living to tell the tale.

As I warned any food has to reach a certain temp in order to be safe to eat according to FDA recommendations. Cook on dashboard at your own risk; it's not something I would try. Below is a chart with proper temps: