Salmon- King For A Week 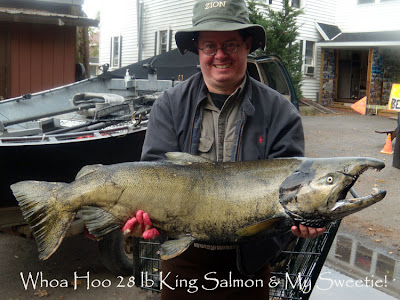 The king in my house is hubby, so I decided after talking to Gordon in Florida, about how hubby and I like fishing, to take him salmon fishing for our anniversary. Explaining to him that we have not caught any fish over two pounds since a trip down to his part of the country years ago, and hubby was frustrated. He asked if we had ever been to Alaska fishing for salmon. Saying no, Gordon suggested we meet up in Pulaski, NY October 10th. The Salmon River; where many pull in the big catch. He promised that we would never forget the feel of yelling 'Fish On' when we felt a thirty pound salmon on the other end of our line. The biggest fish I had ever pulled in the boat was twenty two pounds.

October 11th is our wedding anniversary. The day we knew we were in love, and shared a passion for food, wine, travel, and fishing. As my plans began to fall in place, I learned that this trek meant booking your rooms months in advance, and I got lucky. Did it, all done, and packed. We were ready to hit the road!

First we headed up to the Finger Lakes, and spent our actual anniversary night at a bed and breakfast. A little exploration, good wine tasting, and a fabulous breakfast was waiting that blissful morning!

The Anna Rose Wine Country Bed & Breakfast comes highly recommended in the Seneca Lake region. Inn keepers Sharon and Ken Miller run a beautiful place that is located in the heart of the Seneca Wine Trail. They are very knowledgeable about the area wineries, and go out of their way to make you feel at home. If you want the utmost in hospitality with their beautiful accommodations, I have listed the information on the photo below. 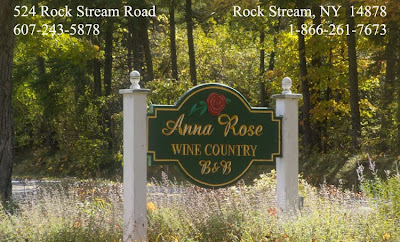 They offer six rooms that appeal to all sorts of taste. We stayed in the 'Anna Rose' room. If you have a group, or just want to have a weekend get away, I recommend you try this spot for your retreat. We are hosting an even with our American Wine Society group here in the spring. 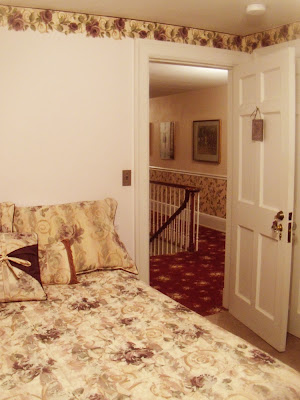 Check out what is in their backyard! 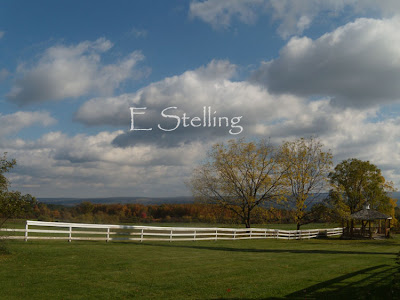 I love this time of the year with fall colors, and the cooler weather. So many breathtaking pictures can be pursued. Inspiration for my poetry, and short story writing. 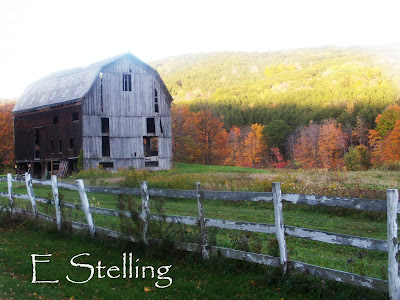 We left The Finger Lakes area on Sunday, and headed over to Pulaski, NY where the King 'Chinook' Salmon a week before had begun to head upstream to spawn. The second or third week of October female salmon head to the shallow gravel beds of the river to lay their eggs. The males follow, and then cover the eggs with milt. Eventually they finish their life cycle and die; then the Steelhead Trout head into the area to eat the eggs. This is one of the reasons many feel its a challenge to snag one of these big fish. (this shot was taken near Orwell Brook, a place known for spawning beds) 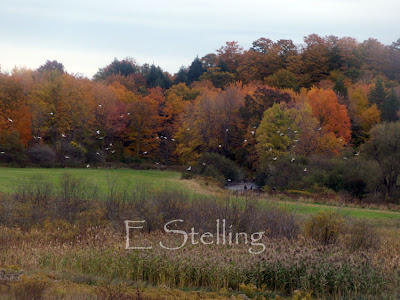 I was bothered about the fact that fishermen were trekking all about the eggs that lay under their feet, but felt re-leaved to find out there was a hatchery nearby. They raise Co Ho, Chinook, and Steel-head Trout to replenish the rivers and lakes supplies. I spared you the many pictures taken of the hatchery workers removing eggs and milt; fertilizing the eggs, and placing them in holding buckets. The holding room were they go after they are hatched was huge. They explain how the fish are released into the wild at an early age, so that they can swim to area waters such as Lake Ontario.

I believe they told us that only one in five hundred fish return to the place of their birth. They are either eaten by other fish, are fished out, or simply die. 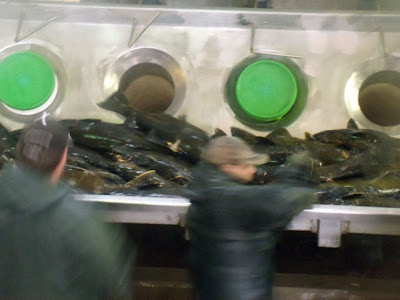 Gordon giving us advise- Types of rods, reels, bait to use, tips on casting, and pulling these big fish in. 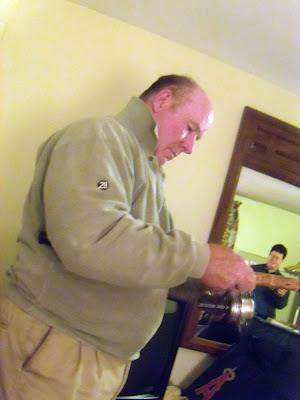 Another section of Orwell Brook- a location where we heard they had been pulling in salmon by the dozens. Gordon and Hubby finally land one. 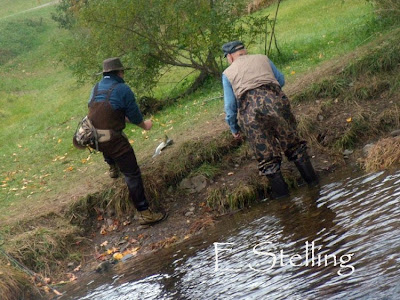 Gordon and I showing off one of our day's catch at sunset for our Friday Shoot Out- 'Sunrise/Sunset' post last week. 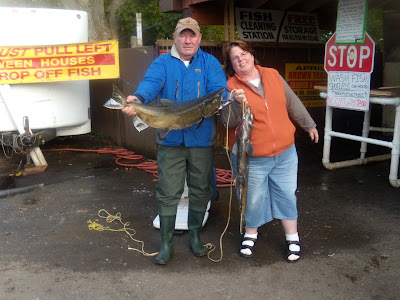 Our Drift Boat guide, Don Kingsley. We started at 5:15 AM; making stops during the day along the river to cast some spinning and fly rods. 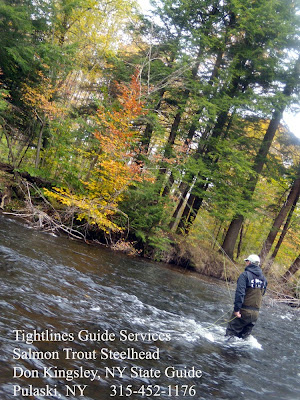 Cleaning stations are positioned in and around Pulaski, and are required by law; unless you live in the area, you cannot clean and fillet your own fish. Many years before the state created these rules, fishermen and hunters would come in by the droves leaving animal, fish carcasses along with trash on the river banks.They will fillet, smoke, and store your catch; until you are ready to leave. 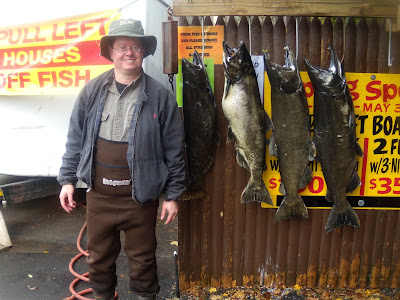 On our last night in Pulaski I asked our hosts if I could cook for the whole house, and would have to borrow their kitchen. The agreed, so I made Baked Salmon with Penne Amore (below). The house was full of wonderful and friendly people who go each year return to experience the fishing. The three other gentlemen fish in the No Fly Zone. They believe in a catch and release philosophy, but they were kind enough to accept my offer to eat the salmon I caught.

Joanna and Steve Young run this beautiful house, Woodlawn Bed & Breakfast. They treat you like family. I will be posting the photos of the whole house in a few weeks. They have it up for sale, and are looking for someone who would keep the bed and breakfast business going. So much work went into their 1800's farmhouse (with original barn). This wonderful couple have turned it into a place were most feel like family! I will be posting pictures of the rooms soon... 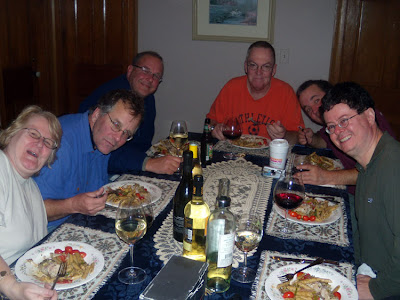 I was a bit apprehensive about cooking and eating the salmon we caught. I heard so many different stories about how the salmon's meat deteriorates as it begins its adult spawning cycle. Many locals who fish in Pulaski (our guide Don) said they bake, or smoke it. A few locals I spoke to in town said they would not touch it. Gordon on the other hand said he bakes and smokes all of the fish he brings back home. Internet information reads that only the males are worth eating if they have not spawned, and it all depended on what part of the river you catch them. The older they are, the tougher the meat. This holds true in most of the foods we consume.

Now that I have gone through the experience- two of the males we caught down stream still had their nice silver coloring, so I made the decision to have one smoked, and would cook one half fillet for dinner and freeze the rest. Thanks Buffalodick, he was kind enough to collaborate on these findings by stating "The older and larger the salmon, the worse it gets eating fresh... brine and smoke them, and use in dips and spreads..."

I looked up recipes for salmon roe we took from the females. Wanting to see if it was worth the process, and it was. We learned that many Russians from the NYC love to fish for the salmon, and collecting the roe; even selling their catch when they return to the city.

Hubby enjoyed his anniversary trip; along with the meals I made- Salmon Roe, Smoked Salmon, and more baked fillet dishes. I need a bigger freezer! 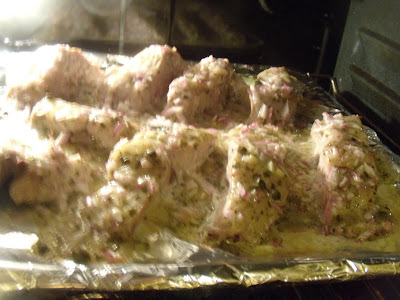 begin to saute for about 7 minutes, and then add:

Turn off heat; toss with Penne, and cover with lid until ready to eat; toss once again before serving with salmon. 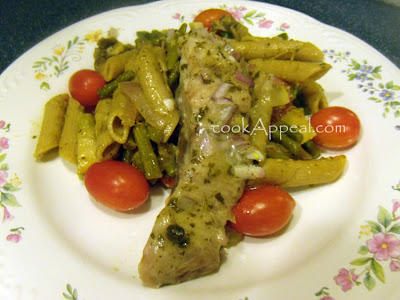