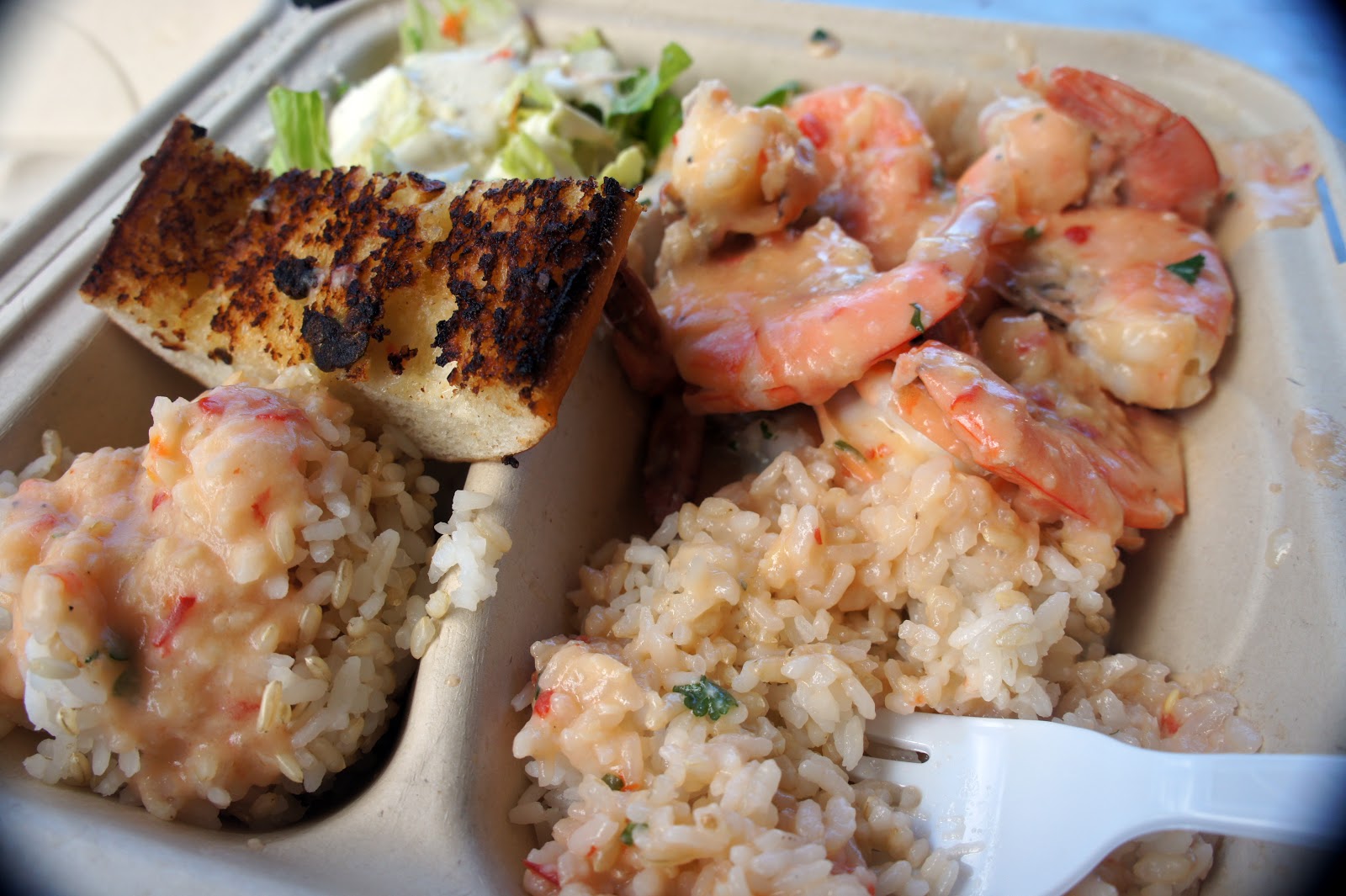 When we travel, we look for food. Of course, everyone does that right? Not usually Food Trucks though. It is a foodie adventure whenever traveling to new places, and there was a time when you would never had stopped and eaten at a food truck. Now, it is often known to be some of the best eating establishments in many areas.

Low rent drives these mobile culinary trends up into vast popularity. Once you have established yourself then you move into a higher rent local. Or not. But I don't think this is going to happen in this situation. Too many beach goers and tourist wanting quick and tasty eats at their beckon call. Some don't even bother with the truck, they use a van and various tents, and set up table and chairs for eating. A few only do take out.

No matter what you decide, just decide to stop at one; two if you really wanted, because we did just that on our first day out beach combing. We did Ray's Kaiwe Broiled Chicken on Joseph P. Deleong Hwy, then doubled back to the Blue Water Fish Truck for the shrimp. Both were fantastic and we finished it off with shaved ice from Aoki's. It was one of at least three places along the road, but had the longest line, so that gave us a good idea of its goodness.

What ever the sauce consists of at Blue Water Shrimp, I want to know! So far this trip, we tried other garlic shrimp along Ohau's shore line, and theirs was the best. Sure you might be turned off by discovering you have to peel your own shrimp (hubs doesn't enjoy it, I don't mind), but it is worth it. Most have hand washing stations set up for you on a table. They even spoon the sauce over your rice, but don't forget to ask for more.

I read before coming over that the Hawai'ian diet has gotten very fatty which includes lots of rice and macaroni salad laden with lots and lots of mayo. Well it is true. But some of the macaroni salad is good for a bite or two, but otherwise it is just to fill you up. We tried to avoid it by taking the salad offerings when it is mentioned. 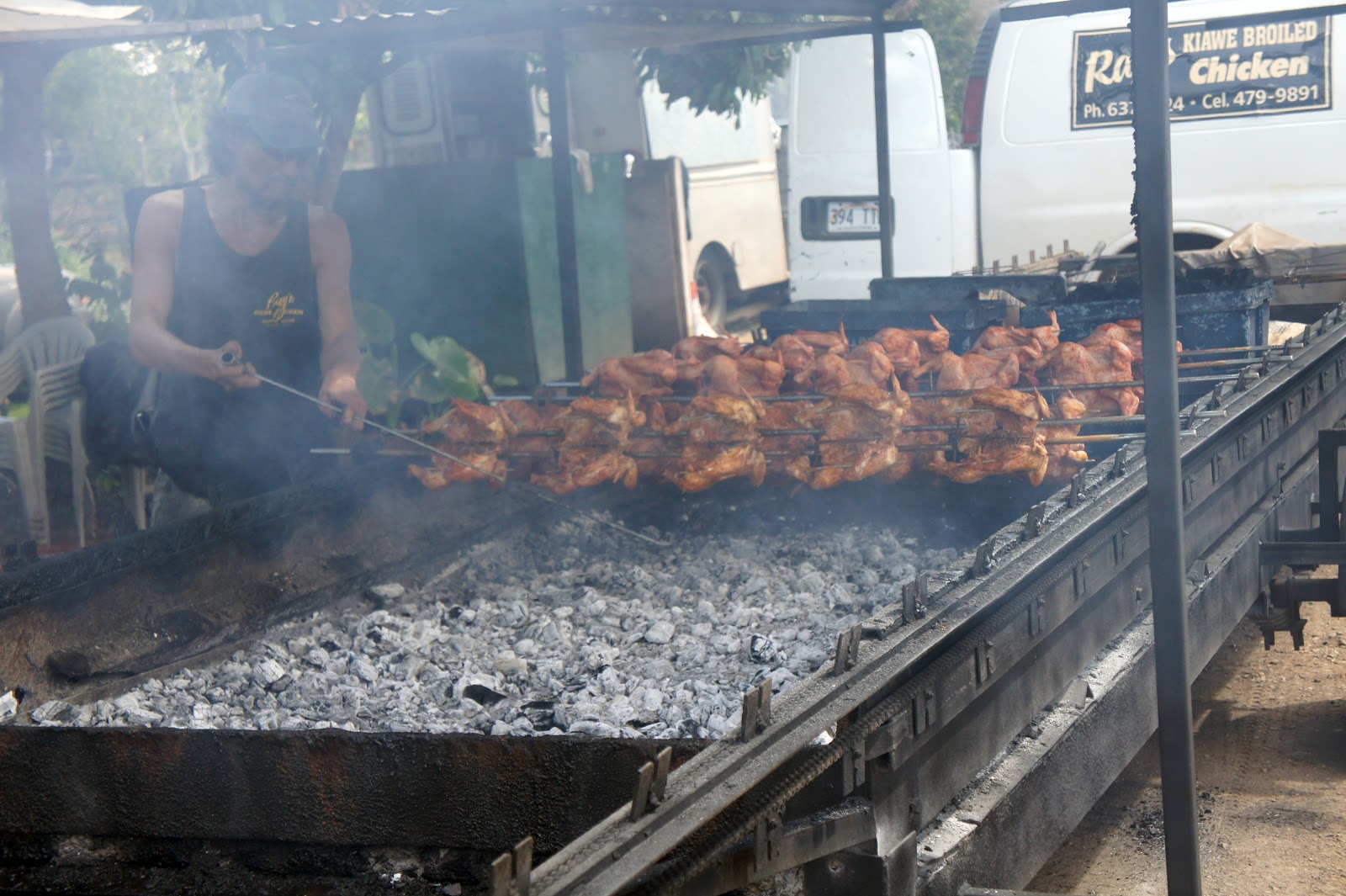 Ray's Kaiwe Broiled Chicken and pineapple cole slaw were fantastic. Whole or half chicken only, but it is such a small amount (skinny chickens I guess) two people could eat more than half. The smell of smoking lava rocks and local wood will draw you in. It is truly the original finger licking good!

Blue Water Shrimp (is actually to the right of the gas station on the corner below) has fish tacos and other dishes besides shrimp, but they are known for the garlic shrimp.

Aoki's Shaved Ice has many many flavors and don't let the long line scare you; it was an indication of really good treats. 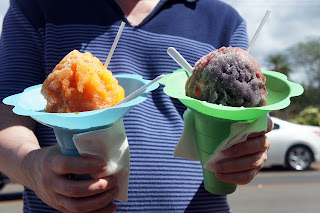