Has crock pots, or slow cooking make a comeback in the last few years? Maybe they have never really gone anywhere? Like fondue pots they are sitting quietly back in the corner of your kitchen cabinets waiting to be dusted off. What is the appeal to slow cooking your food while you sleep? Who wouldn't love leaving for work early in the morning and return home to a hot family meal?

If you follow me, you know I have to look deeper into just where those avocado green and gold beauties got their start! Can slow cooking, and the gadgets that make the life of Alexis AKA Mom (she posts so many wonderful crock pot recipes), and could make our life so much easier!

St. Louis boy has decided he loves the crock pot I passed on to him when he moved away a few years ago. I inherited it from a friend who never used it, and it was still in the box. Go figure! Evidently it can be a mom's and a students most prized piece of kitchen equipment, or so I hear. Like my mom, I rely on the low temperature of an oven, and the grill for my cooking, but I am willing to show my son you might be able to teach an old dog new tricks.

Finding no pin pointed date only the year 1971 for the beginnings of the slow cooker. Crock-Pot (a trademark that is often used generically in the USA) and the Slo-Cooker (a trade mark that is often used generically in the UK), is a counter top electrical cooking appliance that maintains a relatively low temperature (compared to other cooking methods like baking, boiling, and frying) for many hours, allowing unattended cooking of pot roast, stew, and other suitable moist dishes.

A LITTLE HISTORY: Ever since man first tamed fire, slow cooking was discovered as a way to soften up and tenderize those tough slabs of meat and fibrous root vegetables. In prehistoric times, indigenous peoples often cooked wild root plants in a slow burning fire pit for a full 24 hours. This released the nutrition locked into the bulbs and made them much more tender and tastier to eat. Tough meat cuts especially benefit from slow cooking. Slow cooking these chewy cuts broke down the collagen in the meat and turned it into a gelatinous broth. As the fibers of the meat separated and shrunk during slow cooking, the juices would moisten the meat and turn even the toughest cuts into a mouth watering meal.

A crock pot is born! We can thank our ever loving beans for this gadget. Knowing the pains of not wanting to stand at the stove and continually stirring and watching the heat of a pot of beans (as my own parents did week after week when I was a girl) helps me imagine this invention being a good convenience. Canned bean selections pretty limited in the early 1960s, it's no wonder that the West Bend developed an electric bean cooker called the Bean Pot. This early electric slow cooker resembled a tradition crockery bean pot which rested on a warming tray.

Finding that the public was not jumping at this device as they had hoped their company cooks experimented with ways of cooking many other ingredients, and found they were on to something. The Rivel Crock Pot with its removable and easy clean crock was the market appeal that brought it to the fore front in the early 70's. Eventually when more refined cooking became the in thing among couples and families, this gadget was the butt of jokes.

Some how the slow cooker is a retro comeback and sits on the shelves of many food markets and department stores. I have looked around and most of the smaller ones no longer have removable crocks, and as technology goes are disposable and cheap. My son's crock pot is one of those, and I was disappointed when I could not clean it as easily as I had thought. Alexis AKA Mom has a quick fix for that problem- Slow Cooker Liners, made by Reynolds. 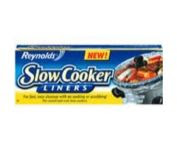 The Liners come four to a box. The Liners are made of a clear plastic that is sturdy and fits a 3 to 6.5 quart round or oval crock pot. These liners are great for easy cleanup, but have a downfall. You cannot lift the food out of the crock pot in the liners, they break. Occasionally when cooking on high, there will be a brown residue on the side of the crock pot where it looks like the plastic stuck to the side. The plastic does not melt and the plastic doesn’t actually stick but it did leave a mark. This was easily wiped clean with a dish towel and a little hot soapy water. 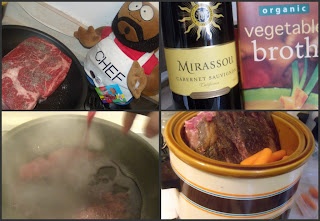 Season chuck roast, and brown in medium high skillet to brown. De-glaze pan with 1/2 cup red wine. Place roast in crock pot along with vegetables, wine, and 1 to 2 cups vegetable broth. Place on low heat, and begin cooking for 6 to 8 hours. St. Louis boy said it was not uncommon for him to leave it all night, and placing the crock pot into the fridge until he returns home later that day. Reheat a portion in a baking dish in oven, and serve.

This next dish I will write about is one of his favorites that I make each time he returns home, or when I visit him in St. Louis. Usually, I cook this dish in the oven, but I was willing to try a new cooking method. The dish- Crock Pot Smothered Steak.

I am most likely back home by the time this piece will be posted. St. Louis boy and I will be looking forward to a trip to Spain later this year where he and I will get the chance to practice more of our Spanish, since our restaurant reservation was accepted at El Bulli, Chef Ferran Adria, Barcelona (the first and top molecular gastronomy restaurant in the world)! Below is one of his college friends, Paul that I enjoyed meeting. 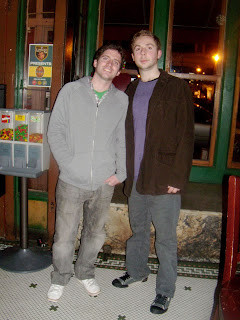 Information on slow cooking and crock pots- Thanks! Wikipedia, History of Slow Cooking by C. Jeanne Heida, Alexis AKA Mom, and other research.
Posted by Chef E at Saturday, January 16, 2010