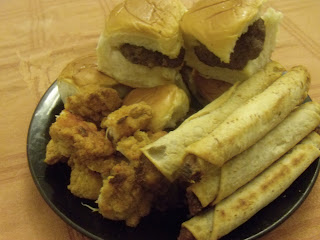 This may look like a plate of this and that, or just junk food, but it is all handmade and homemade eats! My son let me know right away that the Cowboys had made it to the playoffs, and he was having his buddies over to watch the game a week ago Saturday night. Oh my, we needed food, lots and lots of food!

I was planning to make fudge and hot wings, but he wanted nothing to do with buying, or using sugar.We could not find any wingettes, or drummets at three different stores. His work usually carries them, but I guess we were not the only ones with the idea. I told him this trip I wanted to make a few new dishes he had not made before, and about how my mom made fudge. Pass on a few more family recipes, but nothing doing. I guess the sugar post has just been reinforced in my eating this week! 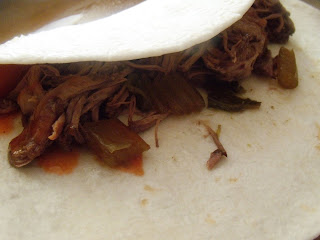 "How about buffalo sliders on homemade yeast rolls, curry meatballs, shredded chuck roast taquitos, chicken strips, and a few healthy dips and vegetables"? I asked St. Louis boy. He agreed, but with one request. Since we made a chuck roast for our dinner the following night, and he wanted to make sure he had leftovers the next day. With a hug he let me know that he liked waking up at four in the morning for work and having food ready for his lunch.

We still had Mojo marinade left, and with a comment from Buffalodick on it being great for pork, I decided to mix it in with the ground buffalo meat, and cooked chuck roast we made the night before. After rolling rounds of buffalo, I asked if my son remembered that nifty trick I taught him when he would help his uncle with grilling burgers. The one where you poke a hole in the middle to help limit the meat from puffing up, and they cook more evenly in the center. He asked me where I learned that, and I told him at a Tupperware party when I was a teenager. I have used it since. 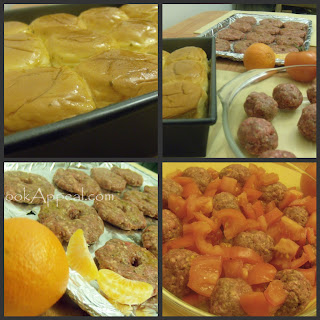 Curry meat balls also had the Mojo marinade added, along with both basted with extra on top. I roasted them both, but adding chopped tomato, red onion, and curry seasoning to the top of the meat balls. After twenty minutes in the oven, I poured some vegetable stock over the meat balls, and then another twenty minutes. Remove the meat and cool the sauce. Puree in food processor.

We made a batch of yeast roll dough with some of the clementine zest and juice I used for the Mojo marinade, and placed them in the baking pan to rise once more. I basted them with the Mojo marinade, and then again once baked before serving. St. Louis boy and I threw together some dip, salsa, chopped celery, carrots, grapes for extra munchies on the coffee table. One of his friends brought whole wheat chips for dipping, another brought chicken strips and toquitos. 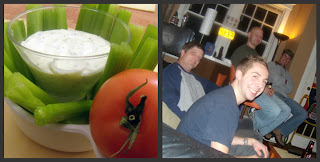 The guys said the food was great, and they were impressed St. Louis boy was always game for cooking even when mom was not around. The Cowboys won!

Want to see what other shenanigan's St. Louis boy and are up too? TMI
Posted by Chef E at Friday, January 15, 2010