On The Lamb! Balela Mashers 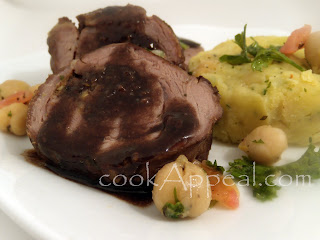 No, I meant 'On The Smoker', the lamb is on the smoker tonight!

Speaking of being raked over the coals, let me vent about some New Zealand Lamb I purchased at Trader Joe's. Two and a half pounds of butterflied boneless lamb that is-

When the package of lamb was opened it seemed ridiculously butchered. Also the layer of fat on the outside was almost an inch thick, I had to cut so much of it away, since we are reminded that lamb is so tasty, but fatty over at Sam @ My Carolina Kitchen post on Braised Lamb Shanks (a beautiful plate of goodness!).

After the lamb was trimmed, there was over a pound of fat taken off that butchered piece of meat. I have a scale (did not think that would be a pretty pic), so I weighed it, and over a pound of fat! For what the price was; it was so not worth it! The lamb was displayed meat side up, so you did not know what it was until you opened it up. I do realize meat can come with a portion of fat, and usually pre-trimmed by the market.

Once I got over that disappointment- I spent a some time pouring over my 'Meat' book and through recipes abound. Wanting to make a new creation, and not the classic rosemary and garlic roasted recipes I was seeing, there just seemed to be no 'spark' that would ignite my creative mind. There were a few recipes using pancetta as part of a stuffing, and that could work. I had chorizo in the freezer from a batch I made last month, and all the rest came to light.

I had so hoped to to open up the lamb, possibly stuffing it in a jelly roll manner, using chef twine to package it up. Oh well. I got some exercise and pounded out the pieces that were left after trimming, and rolled them up with my house made chorizo, red wine, oregano, onion, half a lime juice, and parsley stuffing. The chorizo was taken out of the freezer the day before and about an hour before stuffing, well, when I was done trimming I stuffed each piece and smoked it over some apple-wood chips. Low heat, and about 1 1/2 hours later it was done. Smaller pieces were done before larger ones- Medium to medium rare; which is good, because guest preferred them at different stages.

Balela Mash Side- Upon my trips to TJ's I had discovered a chickpea salad I seem to want to devour weekly, Balela. A quick, simple, and nutritious salad! Balela is a Middle Eastern salad with chick peas, black beans, parsley, and spices. There are variations that use mint, cumin, and other flavorings. The salad is very healthy with plenty of protein and fiber from the beans. I love tabbouleh and hummus, so it is a similar flavor (not so much parsley) combination, but with black beans. In the future I am going to make my own batch of this, my very costly habit, since I keep dried chickpeas on hand. They simply are soaked over night! 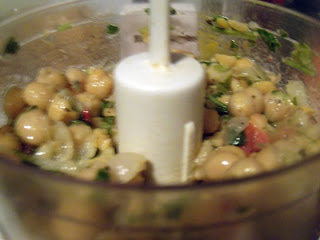 I took about seven very small white potatoes and boiled them until they were fork done (soft). Then take one package of Balela from TJ's and placed it into my little food chopper along with olive oil and lime juice (one lime) until it became fluid, moving around the chopper, like hummus. Mash the potatoes, and mix in the pureed balela. The mashed potatoes will soak up any extra oil or lime juice you might add, so extra might be needed. Mix until you get the consistency you want. The potato starch is needed to hold it together, and potato flour could be used in replacement if desired.

This Balela Mashers side was a nice compliment to the lamb. The chorizo did not make the lamb too spicy. Both tasted great! I may even try making fritters from the left over mashers for our meal tomorrow night, to accompany the chorizo stuffed chicken breast I smoked, and then oven roasted. I also made a pan gravy from searing the lamb and some extra chorizo. After the lamb was done in the smoker, I heated a pan with two tablespoons of oil quick searing top and bottom, then set aside to rest. Adding pieces of lamb and chorizo to the pan, I began making a gravy. I put a 1/4 cup of red wine, de-glazing the pan. Then added a tablespoon of balsamic vinegar and two tablespoons of POM. Reduce until thick, and then strain. 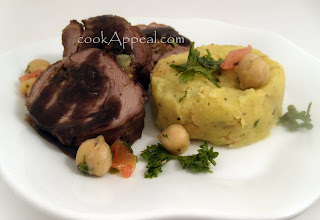 My first recipe ideas were to encrust the lamb with balela, but then with all the fattiness of the meat, it might not stick; unless used with a starchy flour, or even chickpea flour. So I scrapped that idea. I also realize that not everything we purchase will be the ideal product, and will not stray from my regular reliable meat department! Sorry John, I will never stray again (and it was not even a bargain either!).

Julie @ She Smoke has a great post on the difference between grass feed vs feed, and New Zealand vs American lamb that is great with photos of different cuts!

This meal was paired with a nice bottle of 'Pillar Box Red'...I will talk about this type of wine on Wednesday; it was used in the stuffing and in the de-glazing of the searing pan. 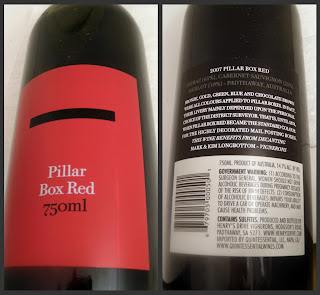