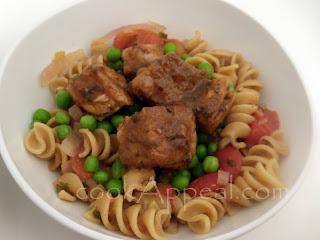 The title reminded me of how much we ate pork and beans growing up, and how fond of simple meals I really am sometimes. If they had made this in a can, I would have loved it. Gobbled it right up! This was a scrounge around the sparse pantry, and after the fact recipe...a why did I not take a photo of the pork on the peas alone thought! Oh well, it was all good, but I did eat the pork and peas in the center before I ate the pasta.

Pom has sent out another package of juice for many of us, and my house is excited to open one upon arrival, and drink it on the spot. With the snow they were nice and cold. I'm sure we all promise to make recipes to our POM representative, but I am finding myself busy, but here it is POM. I had been thinking of using it in a BBQ sauce, but read over at Buffalodick @ Opinions and Rectums We All Got One how he was doing that very same thing. I felt he already has more experience in BBQ Competition over on me, so hmmm, what to do?

I looked over at the counter and saw two limes purchased for my own BBQ sauce recipe, and they were screaming SCREAMING for attention, or bye bye. I did not want them to go to waste...gently Mojo softly whispered in my ear. As I sipped on my little bottle of antioxidant and tasty wonder. POM would give this already great Latin marinade a pink edge.

Salt and pepper to taste

1. In a small food processor or blender, puree the garlic, oregano, parsley, olive oil, lime juice, cumin, pinch of salt and pepper, and all but the orange juice and POM. Adjust the seasoning if necessary, and reserve a couple tablespoons of the Mojo sauce.

2. In a non-reactive bowl, whisk the Mojo sauce with the remaining orange juice, tomato bits and POM. Add the pork, cover with plastic, and marinate in the liquid for as long as you can bear, at least 20 minutes, even better, two hours. Turn occasionally. Cook fat side up. 300 degree oven- 1 hour, or until tender.

I took the pan sauce and pureed it. Chopped the ribs into pieces and tossed in some of the sauce.

The rotini pasta will soak up most of the liquid during cooking process; add peas in center of pasta, and top off with pork pieces. Do not forget to spoon more sauce on the pork! 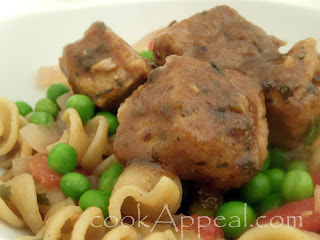 'Pork & Pea' Information- This might be a cutesy name for a New American Pub, do ya think?

I typically have fond memories ('Not') of shelling these as a young girl on a barrel in my parents kitchen. My mom would wake us up early on Saturday morning to accompany her to the Dallas Farmers Market. She wanted to load up on fresh vegetable, and take advantage of the cheaper prices of buying in bulk. We would shuck corn and shell peas, along with many other task to prepare for the weeks meals.

I had two vegetables I did not care for unless they were in a stew or soup, and that was cooked carrots and peas. Now that I have learned to like all things 'vegetable'; since then, peas are something that deserves attention.

A pea is most commonly the small spherical seed or the seed-pod of the legume Pisum sativum.[1] Each pod contains several peas. Although it is botanically a fruit,[2] it is treated as a vegetable in cooking. The name is also used to describe other edible seeds from the Fabaceae such as the pigeon pea (Cajanus cajan), the cowpea (Vigna unguiculata), and the seeds from several species of Lathyrus.

P. sativum is an annual plant, with a life cycle of one year. It is a cool season crop grown in many parts of the world; planting can take place from winter through to early summer depending on location. The average pea weighs between 0.1 and 0.36 grams.[3] The species is used as a vegetable – fresh, frozen or canned, and is also grown to produce dry peas like the split pea. These varieties are typically called field peas.

This cut of meat is a cross between tender and not so tender. A strange explanation I found in my 'Meat' cookbook.
Pork loin country-style ribs are made by splitting the blade end of loin into halves lengthwise. The ribs contain part of the loin eye muscle and either rib bones or backbones. They are usually prepared by roasting, baking, braising, broiling, grilling, or by cooking in liquid.

If the bone is removed it becomes the 'Top Loin' cut...

Of major wholesale cuts, this is the most tender, but yet still needs a slow braise due to muscle and fat. It lies in the middle of the back between the sirloin and the rib. The muscles in this section do little for making it a tough ingredient. The top loin muscle with the bone attached is sometimes called 'country style', and depending on the thickness and poundage, you want to braise covered with foil to present a tender meat.

If this was beef- The top loin muscle with the bone attached is called a club steak. When removed from the bone, the same muscle is marketed as New York (or Kansas City) strip steak or Delmonico steak. When the bone is left in and portions of both the tenderloin and top loin muscles are included, the short loin is the source of porterhouse steaks and T-bone steaks. All good with a good marinade!
Posted by Chef E at Friday, February 19, 2010