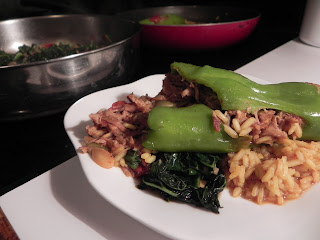 Want to try your skills at making one part of the dish the night before- melting off the bone succulent ribs, then remove the meat and stuff them into peppers the next night? It was not an easy task...

About two weeks ago we had dinner with two couple friends from our American Wine Society group at Daryl Wine Bar & Restaurant. Daryl's is based on one simple concept; pairing the most innovative and modern American cuisine with unique and hand selected wines. The menu changes, and it had been a while since any of us had a meal there. I noticed they had this appetizer on the menu- Short Rib Stuffed Pepper.

We all ordered, and the plan was to share every dish six ways.

I felt my appetizer was a little 'short' on flavor. The beef broth they sat in was made from the bones, which was rich and flavorful, but was lacking on flavor in the meat and pepper. My feelings were that if this dish were made in my own kitchen- it would have to be more intense.

One night I slow roasted the short ribs (beef or pork is okay) with my own dry rub recipe. When cooled a bit, I shredded the meat. Once off the bone I added some barbecue sauce, tomato and jalapeno bits, and pumpkin seeds, then it was placed in the fridge over night. I decided not to roast the peppers and remove the skin, as the restaurant had done (careful though, the peppers split when cooking due to over stuffing them), feeling fresh whole Italian peppers would be fine slow cooked in beef broth (broth I made from the bones and juices of ribs).

I slow cooked the bones with carrots, celery, onion, a few spices, and the juices from the slow cooked ribs. Carefully scrapping any marrow and bits from the bones in the final reduction. This was not enough broth, so I added sugar free beef broth to my mix when actually cooking the rice. (next night) Just before the rice was done I added the stuffed peppers and covered the pan. Turning down the heat so not to over cook rice. The rice, broth and peppers melded nicely.

In another pot I sauteed left over rib meat with onion, tomato bits and kale in a dash of olive oil. The combination of the three were wonderful. The pepper flavor rang out through the rib mixture, and pumpkin seeds added a slight crunch.You will have more than enough flavored broth left on the rice (and it does not dog bone), so make sure you spoon some over the plate just before serving.

A NOTE: In case anyone cares, my food has not been so 'pretty' lately. I have not been feeling well (a nasty cold), since hubby keeps bringing germs home the past month, but I also have been busy with my writing, consulting, and had an interview. I am proud to announce a start-up gourmet food company has asked me to come to work this next week in their kitchen. I like the idea of working for someone else for a while. I will head up production.
Posted by Chef E at Sunday, December 05, 2010