Black Rice from Venus, The Goddess Of Love 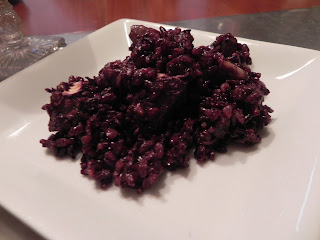 This is a whole grain black rice from Piemonte called il riso nero Venere. Claiming to be the original black aromatic rice- it’s not actually a traditional Italian variety, but rather a relatively new cross-bred hybrid named after Venus, the Goddess of Love.

More interestingly, it wasn’t even created by an Italian but by a Chinese researcher seeking to adapt a traditional Chinese rice which had, until the 19th century, been cultivated exclusively for the Emperor and noble class.

As far as I can tell it is only available for purchase at Eataly in NYC. I have never seen it otherwise, but this is not a claim we have been everywhere. I have tried other Asian black rices before and find them very fragrant, nutty, and filling. This one is pretty much the same, and my favorite- partial hull, turns the water and any other ingredients purple,  and takes up to 40 minutes, or more to cook. Then it is still chewy with a nutty flavor.

Make it according to the directions- boil in water for 30 to 40 minutes, serve with main course. No stock, no seasonings, and throw out the water. The website says the water has nutrients, so throw it out? I decided to treat it like a cross between how I was taught to cook Spanish rice by my South American friend, and how I was taught to make risotto.

I used 1/2 ratio on rice and water, but slowly added stock as it simmered. But first...start off like you would a risotto (it will not be creamy as a risotto). Saute onions in oil, add rice (to pop open hull, and let moisture in as it cooks); add seasonings, and stir before you add the first cup of chicken or beef stock, or any stock you desire.

Cooking time came down to 27 minutes on medium-high. Came out beautiful! Three times the charm, because I used this method above and treated it like a biryani rice, an Indian rice. Add chopped red onion, tomatoes, and cilantro just before done.

I have made five dishes, including a rice pudding from this ingredient and will report soon.

When did I purchase this rice? This past summer at Eataly when we feasted at il Pesce
Posted by Chef E at Tuesday, August 30, 2011