Memories of Spain Seeping Back In- Dining 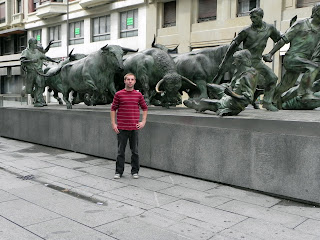 I noticed my cable had a few repeat programs of Anthony Bourdain in Spain and knew hubby would love to watch. Just in case he visited a restaurant or area we did, and he did. El Bulli and Mugaritz. It was like we had returned watching Bourdain walk the steps up to the restaurants, and into the kitchen. He even sat next to the table we had sat, and brought a few great tastes we had experienced to his lips. I love that man. Wouldn't it be great to sit down with him and those chefs. It would to me.

It's really not fair to pin point only two restaurants in Spain as being the best, because the whole country is full of wonderful dining experiences.

Now granite my husband has tried to get us in to El Bulli, his whole basis for a trip to Spain for the past six years and we finally got on the list for September, last year. We planned a three week trip with my son to Spain, and the Basque region of France/Spain. Even Bourdain feels Spain exceeds France in being the culinary travel experience of a lifetime. After visiting Barcelona we headed toward El Bulli. It meant going out of our way a bit, but I was driving, so what was another curve in the road. 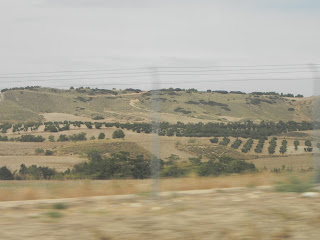 The rolling hills, and a few flat areas of Spain are just beautiful. I made a few videos of our driving and train trip across this beautiful country to document our trip. Olive trees and vineyards dot and dash most of the country side. I even began to contemplate brining my own olives as many of the people do. We had them at each hotel with a cocktail before heading off to dinner. Yes, on to the food! 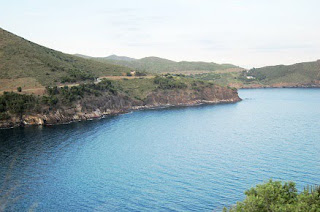 After reading other posts and watching last nights repeat episode of Anthony Bourdain at El Bulli, and him being shown a few secrets, we decided that Spherical Olives, bubbles, lots of bubbles, and some kind of Sponge Cake are a few of Adria's favorites to re-create. Why? Because you seem them in many of the photos on the Bourdain episode, and we experienced them as well. Actually at both El Bulli and Mugaritz, two similar eating experiences, but very different dining environments, style wise.

The chef of Mugaritz, Andoni Aduriz apprenticed under Adria before opening this re-vamped kitchen/restaurant/old farmhouse (fire took out kitchen in 2010). Very similar to El Bulli's practice they are only opened April to December, because they are doing research for their menu. The gather local and organically available ingredients, as well as grow anything in their gardens you cannot find at markets up to an hour away, so that customers may experience some of the best flavor combinations recreated. 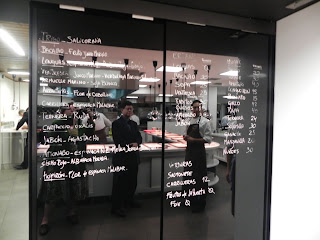 The reservation at Mugaritz was almost made too last minute, as well as hotel accommodations, and we discovered it was around the same time as the San Sabastion Film Festival. Late dinner and slim picken's on sleeping arrangements, but we managed. This also meant celebrities would be all over the place, and they were. When we were greeted at the door they saw my rather large new camera and asked that I please be mindful of customers, rather celebraties due to a film festival week, which meant no photos of the restaurant after seating. 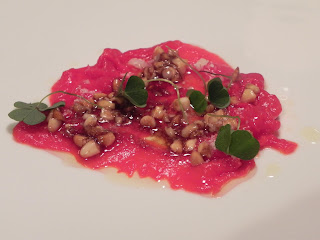 How can one eat over twenty courses in one sitting? My husband and son had no problem, I just have a small taste and pass it over to them. Chef Adria feels if you eat too slow you will tire (said so in Bourdain video), so I try and keep up with my dining companions. One of the most unique dishes was this carpaccio. They ask us to guess what it is. One of Adria's similar fooleries also, as he uses tuna belly to simulate a smoked jamon- this is watermelon, which tastes like a jamon. We knew the flavors, but it was hard to tell, until they told us what it really was.You simply think your eating meat. 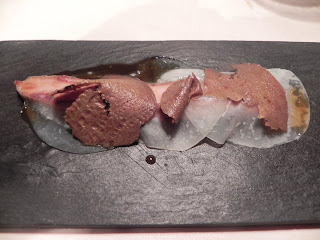 The dish above is a carpaccio of mushroom, which you think is another meat, maybe even a sweet bread of some sort. There is so much, you barely remember them all, but I do know it was good. The wines were also 'so good'! 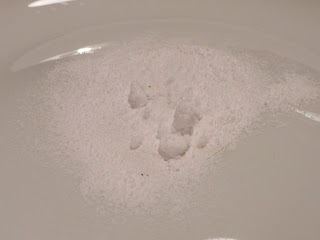 This dish above looked somewhat like powder sugar, and a few jokes hit the table about what it might could be (thanks to my son and husband), but once your spoon cracked through, obviously there was a surprise underneath in a hidden bottom of the plate. Someone had a sense of humor in the kitchen. 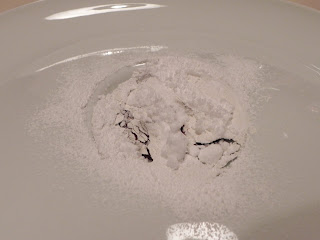 Can it be what you think it is? Or is it dessert? Your brain cannot wrap itself around what they set before you. 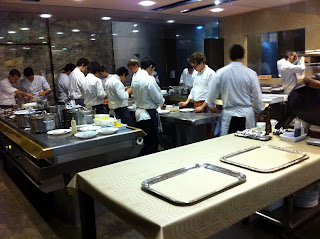 Even as you observe them preparing items as Adria carefully watches, you cannot tell what is before them. 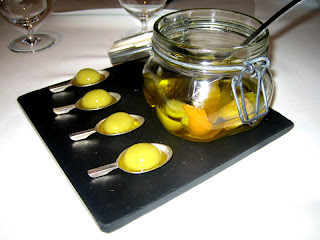 Green olives and foam are a few of Adria's favorites that carry over into his apprentices kitchens (as well as one we dined at in Madrid). I tried making foam, and it does takes some skill. 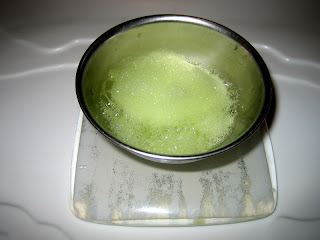 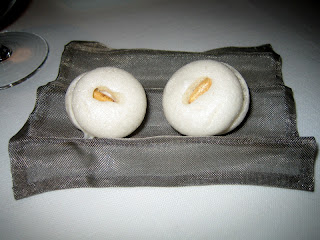 Toward the end of the meals you get a lighter side of desserts which are always my favorite- meringue cookies (to slip into your pocket for the in hotel room cocktail before bed). 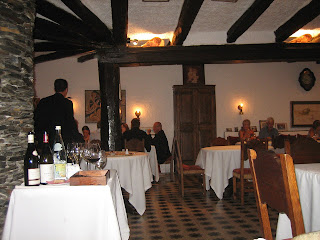 (El Bulli dining room was decorated in traditional upscale european style- the serving dishes were not, the restaurant employ's an engineer to design them.)

At the time El Bulli was a Michelin 3-star restaurant near the town of Roses, Catalonia, Spain, run by chef Ferran Adrià. The small restaurant overlooked Cala Montjoi, a bay on Catalonia's Costa Brava, and has been described as "the most imaginative generator of haute cuisine on the planet", and does a great deal of work on molecular gastronomy. The restaurant has now closed as of July 30, 2011, to reopen as a creativity center (aka school, under private foundation) in 2014. I am sure Adria will find some way to let a rare few back in to taste the students creations. 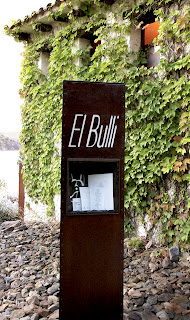 Okay we also slipped in a photo of a celebrity (below), which the staff was watching us like a hawk the whole time, my camera case got a stool of its own next to me during the meal. Paul Giomani along with some Spanish film celebrities, and we were told one was the director of his film. I would not have even know he was behind me, but my son saw him first.

Julia Roberts and a few other famous people were spotted on the streets, and seated at the chef's table in El Bulli. It was hard not to gush over the food, the chef's and everything else (Unlike my aunt when we saw Robert de Niro in NYC's le Cirque dining with his wife...another story), but I remained calm. 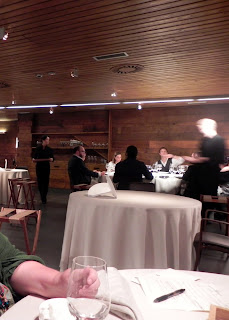 If you did not make it to El Bulli, then try Mugaritz...if you do not get to either, well, there are so many other Adria understudies opening up great places along the Spanish trail.

I have all the photos posted from Spain on my facebook page (food and other), because there are just too many to share, Thanks! (plus blogger for some reason is giving me trouble with the pics)
Posted by Chef E at Sunday, August 07, 2011