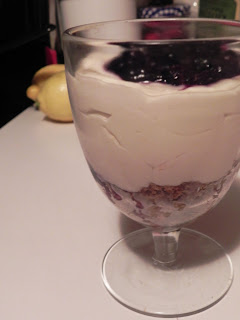 Each year for hubby's birthday I have to come up with new ideas to blow him away. This year I decided instead of a cake, or even a whole cheesecake- I would make him individual Ricotta Cheesecakes.

But...yes, there is always a but isn't there? My sister has been in town and we have been on the go, so much so, I found myself with a serious illness the week of his birthday. Antibiotics in hand I still felt tired, so I decided to make a no bake/no egg cheesecake to make it an easy celebration. Its been years since I made one of these recipes, but I know if done right, they are good.

He loves blueberries, and we live in Jersey, the blueberry capital. I found them for 99 cents a quart! So I had lots of them to cook with this week. They made their way onto wild caught salmon and many other things. Oh okay, here is what I did with the birthday dessert...

I needed a crust, so I took 1 cup of cinnamon life cereal, 5 bite size Reese's peanut butter cups (he loves them!), and 3 tablespoons of melted butter and hand crushed it together. Place it in the bottom of dessert dishes. 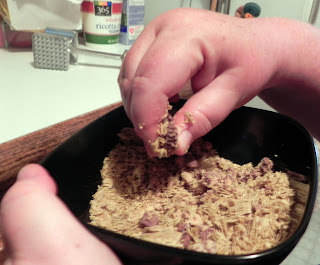 I looked up no bake recipes, and what!?!, I found Tomatoes On The Vine recipe at the top of Google! Ha! Good for you Velva! But I wanted a no bake/no egg version. I knew from memory it was powder sugar, lemon something, and the cheese, but felt I needed some confidence from a recipe. Turns out I was right on...1 pint of ricotta cheese, 1/2 package of cream cheese (my own decision, over gelatin for firmness), the zest of one lemon, squeeze of half lemon, and a teaspoon of vanilla. Blend in the food processor or use a little chopper twice until smooth. Taste for confidence purposes, and spoon on top of crust.

Take one or more cups of blueberries and cook with two tablespoons of orange juice and 1/2 cup of powder sugar until thickens. I spooned some on top of crust before adding cheesecake mixture and then some on top. Chill for two or more hours. Makes two large desserts or four smaller ones. I was told by the time we ate dinner, the desserts were way too big to consume, so smaller glasses can be used.

How did the crust taste with the cheesecake and blueberries? I have to say that I out did myself on this one!

I have made another version of this, individual Margarita Goat-Ricotta Cheese Cakes...with a chocolate chocolate drop cookie crust.

They went great with a Pakistan and Indian meal I made for another chef friend of mine. I used a new hybrid of black rice, and will post soon. For this version, replace lemon with lime, add a splash of tequila, up the powder sugar aunty, and add goat cheese instead of cream cheese. This version will be a creamier and should sit out for at least 15 minutes before serving. Add a berry kabob for garnish. 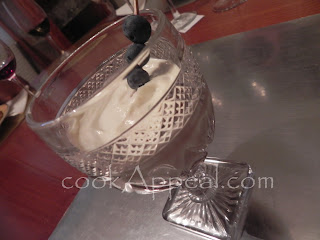