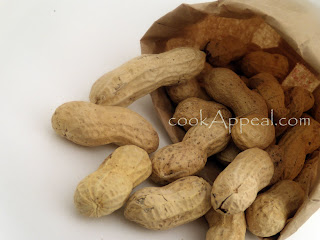 This past summer I read Marc @ No Recipes post on 'Boiled Peanuts', and honestly I had never have eaten boiled peanuts. I know my mother-in-law is crazy about them. Roasted peanuts at the circus is what I always loved, but I was willing to give boiling raw ones a try. 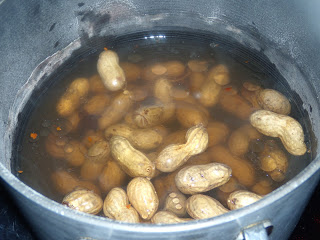 This past September I found a vendor at our local open air farmers market who sold peanuts. I had to convince him to sell me a few pounds of the raw nuts. Health regulations do not allow them to be sold uncooked to the public, but I won him over by telling him I wanted to experiment with my own recipes. 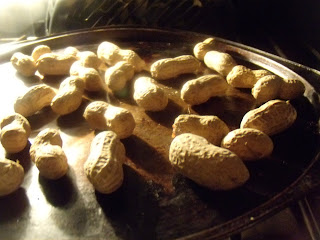 I boiled them as Marc suggested, and his suggested technique worked out beautifully. Also a handful were roasted for my own personal eating pleasure. Both were very good, but then I decided to make peanut brittle with the boiled batch.

I used my friend's mother-in-law's recipe she had made before. Her girls were excited when we made this batch, and we found it so addicting that we had a hard time stopping ourselves from eating it all in one sitting.

I will get the brittle post up as soon as possible, but for now go see what recipe I used with some of these crunchy babies- Stuffed Zucchini You could make these any time of the year!