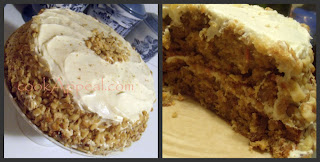 Are you ready to gear up and make sure you and the family survive the holiday season? Do you miss the sweeter holiday moments? Much of the stress of the Christmas holiday is dealing with the shopping, annoying relatives, and the compromising that comes with being in a relationship and deciding whose family's party is more important. I miss my son during these times. If he lived here, there would be no doubt that he would have been here taking a break from college and his busy work schedule. He has told me he is planning to fly to NYC with a friend in January. I will pick him up and head into Long Island for a belated holiday visit with hubby's family. I have had to learn to survive holidays with little or no family, but I am blessed to have lots of friends!

One of my favorite things about the holiday season is attending and hosting gatherings. An open mic singer/songwriter friend, Phil had told me it was his birthday this past September, and of course I had to ask what kind of cake he might like. When he told me his favorite- Carrot Cake. I decided to make him one since I too love it. I remember how special a person can feel when someone takes the moment to do something thoughtful, or act of random kindness. He was leaving for Saudi Arabia for six weeks, so we set up a date to have him over once he returned. Turned out to be the best thing I could have done for him, since trips to foreign countries can really bring on the "Oh how I miss the food of my homeland" blues.

This past Saturday I had family and friends over to help eat up my big turkey, and a few leftovers. I also made some BBQ ribs with some traditional sauce I bought at the Prairie House in Texas. We picked up some Eland steaks (raised in Texas) I grilled, along with a big pot of collard greens and black eyed peas seasoned with pig jowl bacon and Sambar spice. For dessert we had the bourbon brownie pie, but the highlight was my homemade carrot cake.

That cake was the bomb! To add extra moistness, I added a half cup of apple butter to the recipe. That gave it such a great flavor! There is a confession I am going to make. I have not used pumpkin spice in forever, and I swore by it in my twenties. When I discovered garam masala, I use it in sweet and savory recipes. Yes, my carrot cake has garam masala, and of course loads of carrots. Carrots in the early centuries were used to help sweeten many dishes, and thought to have benefits for eyesight. Oh how I heard that one growing up!

I did not grow up with a love for this variety of cake, or cooked carrots. My choice for most desserts is chocolate, but at some point someone made this cake for me and it was an instant love affair. I began baking them and introduced them to my mom. She quickly shared my sentiments. Her requesting me to make one at least three times a year, I eventually got quite good at making them. Then somewhere along the line I stopped baking, and focused on my cooking career in institutional kitchens. As of late I have been baking like crazy again. Maybe its the empty nest syndrome, or boredom. Pulling out my old carrot cake recipe out and dusting it off was pretty exciting for me. Not to mention sharing all the good food with company. I did make a carrot cake last year for my son in St. Louis, but I just took it off the internet. 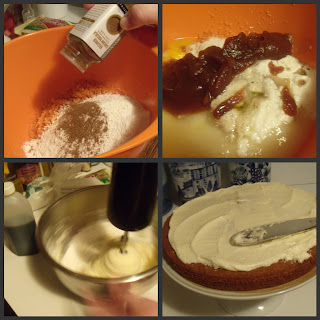 Add dry ingredients into mixing bowl and then add rest of ingredients. Beat well (I mix by hand with large serving fork). Add 1 cup of walnuts and stir. I never cared for raisins like some recipes call for, so you may add them if you like.

Note: For a moister carrot cake, add 1/2 cup of crushed pineapple
(well drained) or applesauce to the batter when you add the oil and vanilla extract. You may have to bake the cake a few minutes longer. I added 1/4 cup of apple butter.

Pour mixture into two 9 inch cake pans, and bake 350 degrees for about 37 minutes (my oven is electric), but when toothpick comes out clean and browned it is ready. Let cool in pan and transfer to parchment cutout on cake plate and frost.

In bowl with electric mixer (or with a hand mixer), beat the cream cheese and butter, on low speed, just until blended with no lumps. Gradually add the sifted powdered sugar and beat, on low speed, until fully incorporated and smooth. Beat in the vanilla extract, lemon zest, and juice. Enough for two layer cake (you may cut cake in half and make a four layer, but increase icing recipe by half). 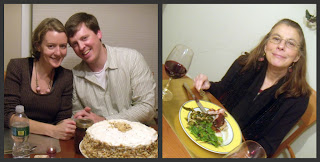 Sharing treats like this make for a sweeter holiday moment when you find the season a little overwhelming...

According to the food historians, our modern carrot cake most likely descended from Medieval carrot puddings enjoyed by people in this part of Europe. Carrots are an old world food. imported to the Americas by European settlers. In the 20th century carrot cake was re-introduced as a "healthy alternative" to traditional desserts. The first time was due to necessity; the second time was spurred by the popular [though oftimes misguided] wave of health foods. Is today's carrot cake healthy? It can be. It all depends upon the ingredients.

"In the Middle Ages in Europe, when sweeteners were scarce and expensive, carrots were used in sweet cakes and desserts. In Britain...carrot puddings...often appeared in recipe books in the 18th and 19th centuries. Such uses were revived in Britain during the second World War, when the Ministry of Food disseminated recipes for carrot Christmas pudding, carrot cake, and so on and survive in a small way to the present day. Indeed, carrot cakes have enjoyed a revival in Britain in the last quarter of the 20th century. They are perceived as 'healthy' cakes, a perception fortified by the use of brown sugar and wholemeal flour and the inclusion of chopped nuts, and only slightly compromised by the cream cheese and sugar icing whcih appears on some versions."

Go on over and read this site, as there are some fascinating recipes for carrot pudding, etc...