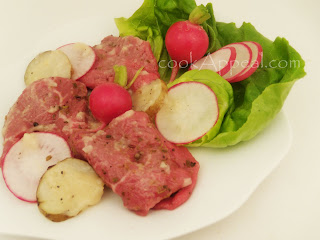 This is part of my '12 Days of Christmas' Food ~ Wine ~ Fun! post, and what better than to take a moment and treat yourself to a decadent glass of wine and a salad full of flavor! What a great way to experiment for a New Years party too.

I paired a Masi Campofiorin, 'Baby' Amarone with this Beef Carpaccio-Sunchoke Salad, that was full of many ingredients and flavors that can stand up to this, or any Italian red wine. If you missed it, my Wine-down Wednesday- Italian Wine  post explains how a Big but in expensive wine can be paired with an array of foods for any type of gathering... 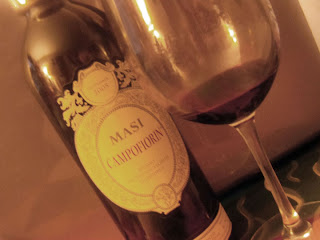 This wine is less a less expensive and tasty version of its parent wine, Amarone-

'Baby' Amarone; 'Ripasso' (means to pass over) refers to a Valpolicella wine style that's made by re-fermenting a young wine on an Amarone's leftover dried skins and lees (literally dead yeast, but it sounds much nicer if you call it "lees"). The process helps the wine to develop far beyond a typical Valpolicella, into a richer, more Amarone-style wine -- but in less time (and with less work), hence the moniker "baby" Amarone- Hence the cheaper price tag. Higher end bottles however can take up to ten years of bottle age.

Masi Campofiorin (Amarone Classico), 09, Wine Spectator Rating 90- This wine is a keeper in our cellar, and is very drinkable and compatible with many foods, as well as a friendly party wine/gift, $15-17.99, depending on state, we spent as little as $12.99 in Dallas

This wine pairs well with most foods, and the 'parent' aged Amarone is no stranger to spicy food cultures, such as Asian regional cuisine, meats and hard aged cheeses. 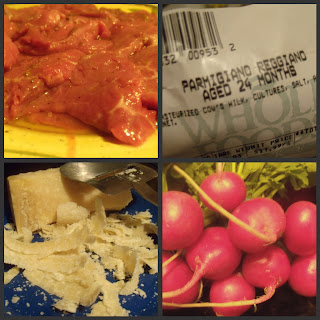 Once I picked my ingredients that would really make a statement, I could almost taste the flavor profile in a plated salad, or a tossed salad.

Carpaccio: Carpaccio (pron. /karˈpaʧʧo/ [kɐ̞ɾˈpɐ̞ʧː˺ʧo]; /kəɹˈpɑːʧ(j)ɔʊ/ Brit[k(ʰ)əˈpʰɑ̟ːʧ(j)ɜʊ], Amer[k(ʰ)ɹ̩ˈpʰɑ̟ːʧ(j)ɔ̽ʊ]) is a dish of raw meat or fish (such as beef, veal, venison, salmon or tuna) generally thinly sliced or pounded thin and served as an appetizer. (information provided by 'Gastronomy Dictionary').


-Beef Tenderloin Carpaccio: seasoned with oil/vinegar, Italian seasonings; sliced thin, and marinated for a few hours. Placing on the plate, or slicing in strips for salad bowl toss. I also experimented with adding soy to the marinade, and then on high heat seared one side, and sliced for a salad tasting. Both worked well.

HINT: If you do not have a sharp knife to slice the tenderloin thin enough, you might ask the butcher to 'hand slice' (not the meat slicer), and then you can pound out the meat between plastic wrap before using marinade.

For the faint of heart, or those who do not care for 'rare' meat- I did take a few pieces, added soy sauce to the marinade, and then in a hot stainless steel pan quick seared the meat (browns on one side only!) to see how it held up to the wine. We found that flavor went well with the wine as well!

-Aged Parmesan: 2 years, shaved in large pieces either over a plated salad or on the side to taste with the wine. Semi-hard and hard cheese pair well with wines such as Amarone. Their sharp flavor go well with wines that can be aged, and have complex flavors. Raw cheese also pair well with complex wines. 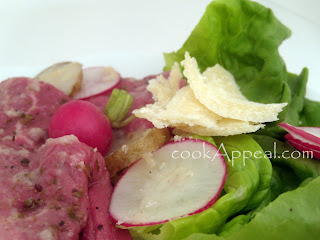 -Roasted Sunchokes- these wonderful delights are grown in my native Texas, and is harvested in the fall for highest quality. Widely available in supermarkets, its peak period is September through January, but often continues through the early spring. I roasted them in truffle oil for half an hour on 350 degrees to soften; then slice in 1/4 slices. If some are softer than others use them for dressing.

The sunchoke, often called the Jerusalem artichoke, is a tuber from a plant that is related to the sunflower. It is native to America, and has nothing to do with either Jerusalem or artichokes. The tubers are gnarly and uneven, vaguely resembling ginger root. The white flesh is nutty, sweet, and crunchy like chestnuts when raw. Baked in their skins, they become more like potatoes with a mild taste of artichoke hearts.

Select firm sunchokes that are firm and free from mold and wrinkles. If left too long in the open, they become wrinkled and soft and can develop a bitter taste. Sunchokes vary in color from dark brown to light brown, similar to ginger.

These tubers need be refrigerated, unwashed, in a plastic bag for up to 1 week for successful storage.

-Radishes: The raw flesh has a crisp texture and a pungent, peppery flavor, caused by glucosinolates and the enzyme myrosinase which combine when chewed to form allyl isothiocyanates , also present in mustard, horseradish and wasabi. Great for a contrast in salads like this, as well a great color burst. 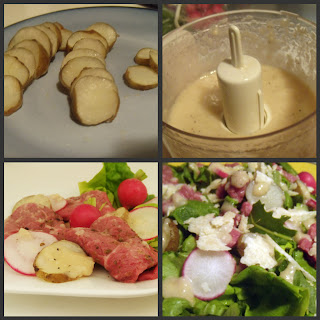 -Sunchoke dressing: After roasting the sunchokes in truffle oil (truffles come from regions of Italy where Amarone grapes, Corvino are grown) use at least half (some will be softer than others) to slice for salad, and combine the interior flesh after peeling with a lemon infused vinegar, EVO, crumbled Parmesan, Italian seasonings, salt/pepper to a thick consistency (like that of Cesar Dressing) in a small chopper/food processor. Vinaigrette or dressing this rocked!The warm sunchokes warm up the seasonings, giving the salad a thread that tied the dish together with its texture and flavor!

Italian Anti-pasta dishes that contain roasted red peppers, artichokes, and other vegetables work well with wines of Italy. Sunchokes roasted bare the flavor of regular artichokes and were excellent in this dish.

-Bibb, or butter lettuce: Mild in flavor, it has been described over the centuries as a cooling counter balance to other ingredients in a salad. This makes for a great presentation.

-Dandelions: Mix raw dandelion greens in with your salad. They will add a tangy and slightly bitter flavor. Tip- If eaten raw, then sprinkle apple cider vinegar or lemon juice over one cup of dandelion greens as I have added to the dressing for this salad. 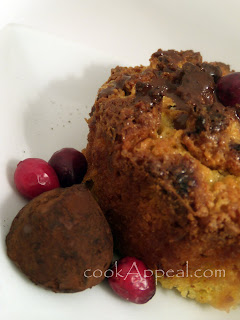 For our dessert I made 'Bread pudding Cakes' from cranberry and white chocolate rolls I made last week, and will post next as part of my '12 Days of Christmas' Food ~ Wine ~ Fun!
Posted by Chef E at Wednesday, December 16, 2009