Not My House, Elvira's- Tubac, AZ 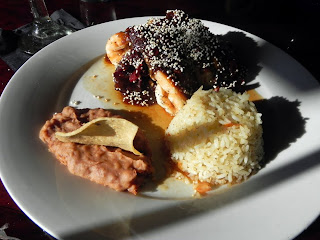 I am back to cooking, and preparing vegetarian and simple meals during the week, but I have to say meals like this while traveling are superb moments in one's busy life- 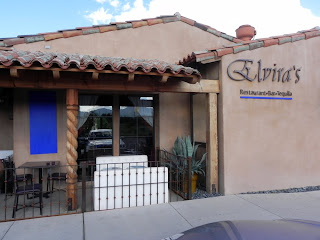 Elvira's is a hot spot in an old-new town of Tubac, with lots of colorful history in Arizona, on the way back into Tucson from Sierra Vista. Tubac was the original Spanish colonial garrison in Arizona. It was depopulated during the O'odham Uprising in the eighteenth century. During the nineteenth century, the area was repopulated by miners, farmers and ranchers, but the town of Tubac is best known today as an artists' colony.

We had Tongue Molcajete with Salsa Verde Sauce- the mortar comes out piping hot, boiling like a volcano, with a side of beans and guacamole. I was apprehensive, but it was good. Tasted like chick...no beef! Strange though...it had bok choy and cubes of tofu- Mex/Asian Fusion I suppose. 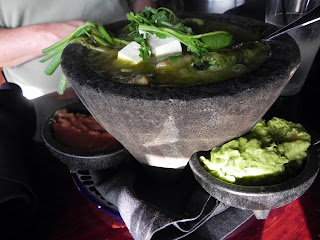 I had a spicy- Tamarind sauce over mesquite grilled shrimp on top of pineapple with rice and beans. Was a bit sweet, but I was excited to see the popcorn like topping, Amaranto (Amaranth). Doggybloggy sent me some that is in the freezer, so I have to use it now, or sometime in the future. Added a nice flavor to the dish. 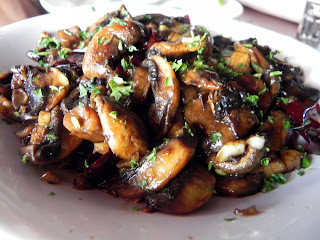 Now the Honey-Prickly Pear Margarita was yummy, along with the sauteed mushrooms we had as a starter in corn tortillas. This is not authentic Mexican, but the spicy habanero salsa had me ordering another one. 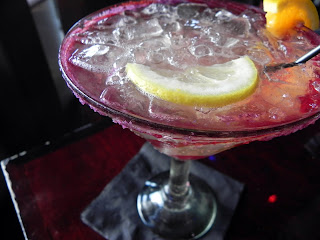 Reminds me of visiting Velva of Tomatoes On The Vine- Refreshing and you could almost taste it!
Posted by Chef E at Tuesday, September 21, 2010