Roasted Lamb- Was it worth the wait? 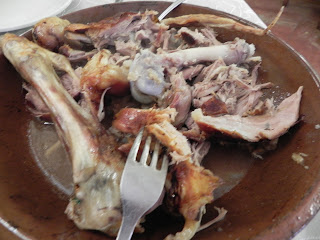 I know, it looks picked over, but the waitress tore it apart! -Roasted Oven Lamb.

One of our many eating adventures in Spain that has me longing for more... Yes, it was worth it...did the long line give away how good it was? Or was it the fact Haro only had a few restaurants open for lunch, and this was the longest line?

The big meal is often eaten between one and four o'clock in the afternoon in some areas of Spain. Or you have a big meal later in the day, after eating tapas and wine at local bars around four or after.

We were staying in the Rioja region, my son had headed back to Madrid to return home, and being up early to take him to the train station...well, we were really hungry by the time we finished exploring. 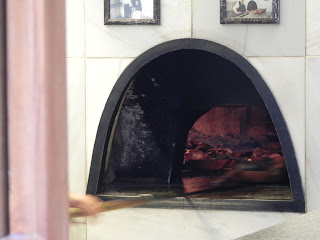 The food gods were looking down on us, because this was one of the most unique places we had seen in the villages. They have been around for one hundred years. The line was out the door and around the corner, but we were told it would only be about fifteen minutes...over a half hour later I was still talking it up to hubby, but he agreed...the food was worth it. The entertainment of watching the lamb go in, and coming out helped keep you engaged. A few people around us spoke some English, so we practiced our bad Spanish. 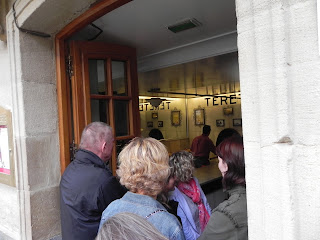 The family passes down the business from generation to generation, and this is one great investment. They also make their own wine locally. Something you cannot buy in the Undited States.

A meal is served around the plate of lamb, depending on how many are sitting at the table, and then all sides are family style. I was intrigued by the oven. A complete stone encased wood burning oven. I wished some bread or pizza had been on the oven, we would have taken some to go for our dinner!

The server brings the lamb to the table on a wooden board (the clay bowl is hot!) and removes the meat from the bone for you...there was so much we asked with our GPS language helper for a doggy bag...lost in translation as she returned with simply a plastic bag...so we figured out how to say 'To Go', and she boxed it up. 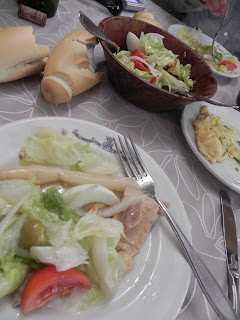 Upon leaving I purchased a clay plate for my own fancies, and will share my own leg of lamb meal I recently cooked. This plate is bigger than a Moroccan Tagine, the same affect, but more room for ingredients to go around the lamb for flavor. I obviously do not have a wood burning oven to give the lamb that crisp outside like we enjoyed at Restaurante Terete. 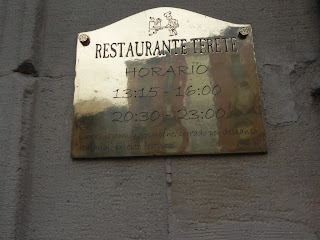 Location- Haro is a locality and Spanish municipality, located to the northwest of the Autonomous Community of La Rioja, being head of its region homónima and the most important population of denominated High La Rioja. It is contiguous with the province of Burgos by Montes Obarenes to the North and with Álava by the Ebro to the East.

Did I mention how fantastic the wine was? We are enjoying a bottle with the lamb meal I made right now...if I remember correctly, we had two bottles at lunch...gosh how did I drive back to the hotel... 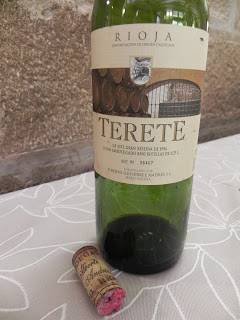