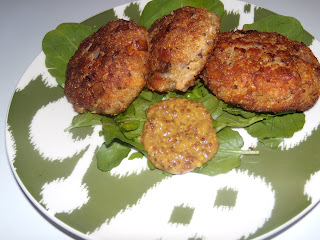 Some of you out there may be saying what are 'Croquettes', and some are going 'Yuck' did we just zoom zoom back to the 70's! Like I might have at seven or twelve years old... Mom made these every so often when she could afford a can of salmon, yes, snub your noses at 'canned' anything...but when you are poor some things are not an option...fresh Salmon like we do today...no way!

A croquette is a small fried food containing usually as main ingredients mashed potatoes, and/or minced meat (veal, beef, chicken, or turkey), shellfish, fish, vegetables, and soaked white bread, egg, onion, spices and herbs, wine, milk, or any of the combination thereof, sometimes with a filling, often encased in breadcrumbs.The croquette is usually shaped into a cylinder or disk, and then deep-fried. The croquette (from the French croquer, “to crunch”) was a French invention that gained world-wide popularity, both as a delicacy and as a fast food.

Well at least it is the internet meaning...my childhood recipe memories are of old white bread crumbled when left open without the twist tie...often enough through out the week (kids!), a few eggs, onions so chunky they bite back, canned salmon, and if you were lucky mom might feel a little creative and put some mustard or miracle whip in them. We would have them with mashed potatoes as a side, and I think she got the idea from her 'Betty Crocker' cookbook from the 1920's (exaggerated a little) given to her by my dad's mom! That was about as gourmet as her kitchen was, and we did not even know it was French! So I was cultured... 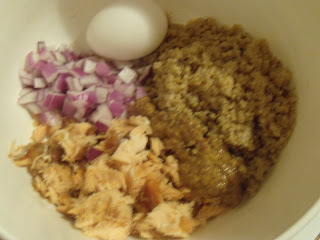 Sorry for the blur, but I thought the five pics I took looked okay on the camera...photo critics cut me some slack! Please...


Leftover Salmon Candy crumbled with fingers, cooked seasoned Quinoa from the weekend, red onions, egg, and grainy mustard was my first thought, so I went with it, and as long as hubby does not read my 'memory' part, he thinks I have gone to a lot of trouble, just the oil smell is a little overwhelming, so I make them before he gets home. They are good to eat at room temp...so let's go with this one...

As it says in the above Wikipedia info...the French term croquer represents quinoa...and it does just that *crunch*, along with the sweet taste of the salmon and the slight hint of mustard...its a keeper! Oh, and try it over a home-mixed bed of greens...that information you will see on the next post... 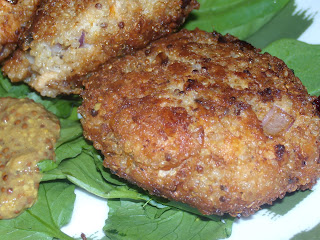 Go ahead and drool at this closeup, I am...I ate it like I had never had them before, and you know what...I had not had this version...this definitely blotted out old memories quicker than you can say 'Salmon Croquettes'!
Posted by Chef E at Wednesday, February 25, 2009