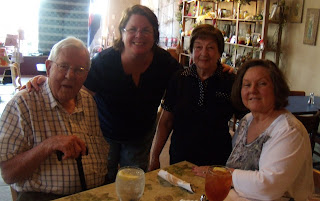 A reunion with family and the opportunity to travel to the area where my Scotch-Irish ancestors settled during the 1800's always makes me think of my grandmothers recipe for Chicken n' dumplings... 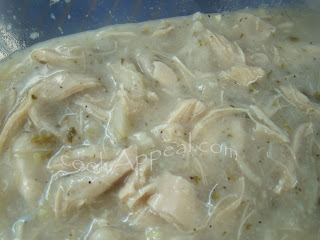 Will anyone really know where recipes originally come from, as they are passed down ingredients and things have changed? I know the history of this dish in our family goes as far back as my great-great grandfather, John Akin, who traveled from Tennessee to Texas to make his fortune; where food like this founds its way on to our tables. His wife made them, and taught their daughter-in-law; then it was passed down to my grandmother, and then to her son's wife, my own mother. Chalked full of chicken and yummy handmade dumplings or pinched biscuit dough; they clearly have not changed my memories. 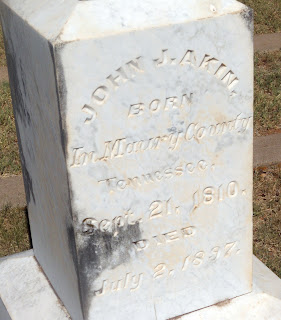 My friend's husband and man of the house this past week (in Texas), Randy had asked if I could make some good ole chicken n' dumplings. My grandmother had made them so many times they had become a symbol in my mind of hospitality and love…how could I refuse. There are many recipes for this dish, but I decided to try rolling out my dumplings over her biscuit version. This dish is hearty, was, and is an inexpensive way to feed large families, and since we were expecting a large crowd...chicken and dumplings it was. 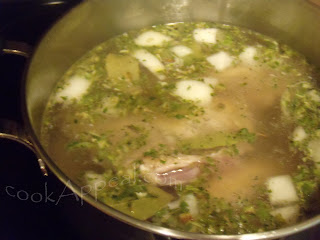 A mention of today’s modern home style Texas cooking brings to mind greasy enchiladas, home grown tomatoes, chicken fried steaks with milk gravy, and a long neck beer or tall glass of sweet iced tea to wash them down. Chili, BBQ, and Tex-Mex are classic Texas food groups, but there is also a strong traditional style of cooking with its roots in Southern cuisine but with a uniquely Texas flavor. Many of these dishes were brought over by immigrants and slaves. 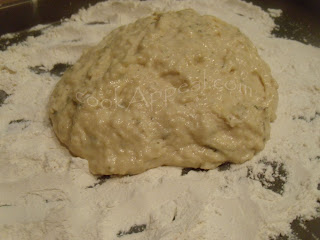 Texas cooking also has a style all its own, influenced by its proximity to Mexico, Native Americans, cowboys, and a frontier spirit. In its beginnings hundreds of years ago original dishes were influenced by settlers from all over the world. Mainly German and Austrian cultures that brought us dishes like dumplings and veal cutlets smothered in gravy.

Those who came to the Lone Star state to seek their fortune, but left more of their culinary mark. The simplicity of seasonings and ingredients clearly represent region of Eastern Europe, and many of these settlements are still standing strong around our great state.

Also popular in the mid-west and southern regions, but also found in many Pennsylvania Dutch kitchens as noodles in a rich chicken stews. 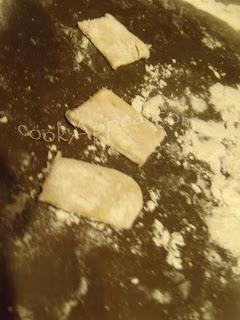 The popularity of this dish spread to the Pioneers and Cowboys who traveled long hot trails. The food had to be just as rugged with things such as flour, sugar, beans, beef jerky, sometimes corn, and they picked up fresh water and lard for cornbread, tortillas, rabbit stew, and any other varmint they might happen to shoot along the way.

Vegetables and seasonings were often a luxury, and might be why stews and other dishes like this one were barely flavored by the bones of the chicken. On many occasions it was one pot cooking; unless they came across someone or place that was willing to trade a thing or two. If they were invited into a home, or ate at a local eatery that served this dish, well, they were probably more than happy with its meager ingredients.

Disjoint the hen as though it were a frying chicken. Place it in a large pot with the onion, bay leaf, water to cover by 2 inches and salt and pepper to taste. Bring to the boil; reduce heat immediately to low and simmer until the bird is tender. Remove chicken. Cut the meat from the bones in large pieces and reserve. Strain the broth and return 6 cups to the pot.

Now sift flour, 1/2 teaspoon salt and baking powder together into a bowl. Combine egg, melted butter and milk, adding parsley as well; beat together and add to dry ingredients. Work to a good dough like consistency, turn out on a floured board and roll to somewhat less than 1/4-inch thickness. Cut into strips 2 x 3 inches.

Bring broth to a good simmering heat; do not boil. Stir in 2 tablespoons flour rubbed with 2 tablespoons extra butter. Cook, stirring, until smooth and thickened. Add the dumplings a few at a time, sliding them down into the hot broth. Continue until all are in. Cover tightly and cook 20 minutes without lifting the lid. Arrange the cut-up chicken on a deep platter, spoon on the dumplings and cover with as much of the delectable sauce as you desire.

A little bit of history: Many upper class back when had considered this dish a 'poor' mans country food, and did not want to see it on menus of higher standard eateries in cities. The meal was messy and slurping of the stew was considered just plain bad manners.

My feelings...this is a great comfort food, and who cares how or what we eat, as long as mom's and grandmas continue to keep us warm, well feed, healthy, and embedded with lots of these kinds of memories...
Posted by Chef E at Wednesday, July 01, 2009