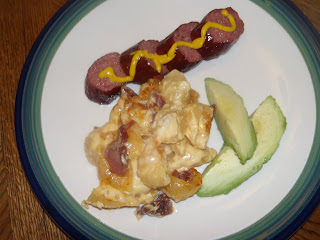 [My friend Carol and husband Henry got crazy into taking the photos, and adding mustard to my plate]

After visiting Chris @ Nibble Me This in his hometown in Tennessee and tasting his wife's macaroni and cheese dish (I dubbed 'Smack & Cheese'), my friend, Lisa and I vowed to duplicate it for our friends in Texas. Why? Because it was the creamiest and best either of us had ever had! I am normally not a big fan of mac and cheese since my two children burnt me out on wanting the box version for fourteen years, and my mom's oven dried out version as a child; I just never wanted to eat it again, but Alexis and Chris have made a believer out of me.

Have you taken a trip somewhere across the pond, like Ireland, and had cream with your coffee or tea; milk on your cereal or fresh fruit; spread a thick and rich butter on your toast, and thought it was like none you have ever had in the states. Have you eaten at high end restaurants like Maggiano’s, and had pasta dishes like their Veal and Mushroom Ravioli Alforno (meaning ‘oven baked’, or pasta that is "al forno" is also often al dente; which means "at/to the tooth") with its thick and rich cream sauce, and thought it was to die for? Well, it is because they do not have regulations, or food standards in place on things like milk, cream, and butter. Anything you purchase in our stores here in the states is regulated.

I did replicate Chris @ Nibble Me This, wife’s ‘Smack & Cheese’ recipe using a restaurant grade heavy cream (38-40%) given to me by a chef friend here in Texas to replace the regular store bought cream and milk recipe below. 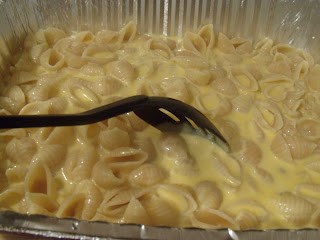 When I introduce high milk fat cream sauces such as this to my friends outside of the restaurant, well, they ‘ew’ and ‘ah’ over the taste and texture, but then conversation goes straight to how they all feel guilty about the consequences of eating dishes like this. Not me, since I do not consume much cheese or regular milk at all. His wife Alexis and I discovered after talking that we both have a love affair with heavy cream, and I often substitute it for milk in recipes. Heavy Cream is a regular staple in all my kitchen(s). I knew once I saw the recipe I had to make it my own. 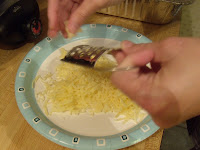 I looked for a unique cheddar cheese topping, as well as my favorite prosciutto from the San Danielle region of Italy to add as an extra touch. 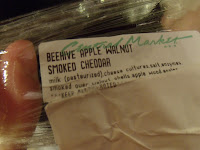 The only thing we did not find in Central Market (Lisa had never been, and I love seeing their jaws drop on the first visit) was the large macaroni noodles needed, so we agreed on shell pasta. With so much shopping that day we wanted a one stop market visit. The cheese and cream factor IS the star in this production. As long as the pasta has spaces to hold the mixture, and squishes out when your eating; its all good! 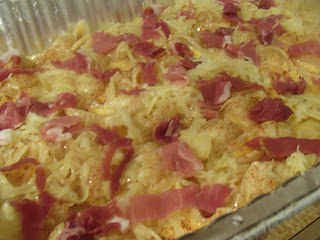 Henry smoked some German sausage with pecan on his seasoned grill, and Lisa cut up some avocado to compliment the 'Smack & Cheese' for our dinner. I must say that with all the flavor combination's going on in our mouths that night...the avocado was the most brilliant addition for the pecan smoke and cheese on the palate. 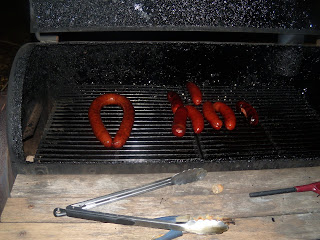 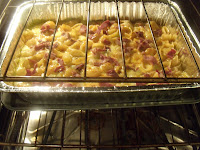 Henry walking into the house with the sausage, and opening up the oven was like the heavens opening up after leaving Central Market in my photo. The smell was almost too much to bear!


Cream (including light whipping cream) is a dairy product that is composed of the higher-butterfat layer skimmed from the top of milk before homogenization. In un-homogenized milk, over time, the lighter fat rises to the top. In the industrial production of cream this process is accelerated by using centrifuges called "separators". In many countries, cream is sold in several grades depending on the total butterfat content. Cream can be dried to a powder for shipment to distant markets.

Cream produced by cows (particularly Jersey cattle) grazing on natural pasture often contains some natural carotenoid pigments derived from the plants they eat; this gives the cream a slight yellow tone, hence the name of the yellowish-white color, cream. Cream from cows fed indoors, on grain or grain-based pellets, is white.

For cooking purposes, both single and double cream can be used in cooking, although the former can separate when heated, usually if there is a high acid content (like sour cream).

Other countries cheese products, creams, and butters might taste better than ours, but food standards are not always regulated in European countries, and therefore labels and packaging can say anything they like. To keep consumers from being deceived and defrauded by such schemes, standards have been established for a large number of common food products in our country. The standards--some set by the Food and Drug Administration, others by the U.S. Department of Agriculture--define the products so that a shopper knows that a food really is what its label says it is, and not a cheapened substitute.

Full-fat crème fraiche when cream is added to a hot sauce, to prevent any problem with it separating or "splitting". In sweet and savory custards such as those found in flan fillings, crème brûlées and crème caramels, both types of cream are called for in different recipes depending on how rich a result is called for. It is useful to note that double cream can also be thinned down with water to make an approximation of single cream if necessary.

Note: Unlike heavy cream, lower-fat substitutes like half-and-half and evaporated milk tend to "break" or curdle when added to sauces. To prevent this from happening, heat the sauce over low or medium heat, or reduce the cream substitute before adding it to the sauce. Don't let the sauce boil. Cream sauces made with lower-fat cream substitutes also tend to have less body; to correct for that, consider adding 1 tablespoon flour or 2 teaspoons cornstarch to the sauce for every cup of evaporated milk substituted. Stir the thickener into a paste first to prevent lumps. Ultra-pasteurized whipping cream is harder to whip and has some unpleasant flavor notes. 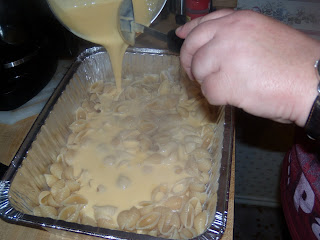 [Photo by Carol; hand by me]


I was waiting for Chris to email me the recipe, and not rely on memory, as the copy I had disappeared during our get together...hmmm)

Alexis 'Smack & Cheese' Original, and alterations made by Chef E
(The original recipe was double this amount. Original recipe was reported by Chris to be popular by over 166 BBQ'ers, and off of BigOven 3+, GBolten and an unknown Kelli)

In sauce pan heat together-

Alexis, Yours was to die for, but I would suggest you and Chris befriend a local chef who cooks with restaurant grade heavy cream, or find a local dairy farm for a good ole low pasteurized, or raw cream, and 'milk' them for a few quarts of the good stuff for her addiction! 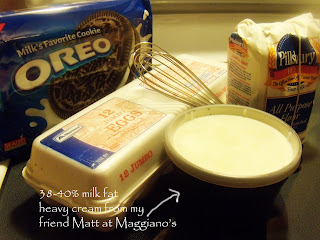 Matt could not let me walk out of the restaurant with the quart due to silly restaurant rules, so he gave me two containers full of the heavy cream. I saved one for my next post...Deep Fried Oreos...something I had not had, or made before...
Posted by Chef E at Monday, September 21, 2009