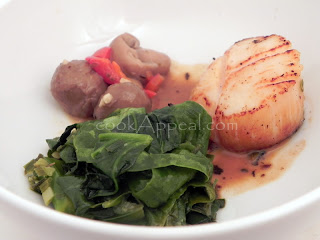 My son asked if we were going to run with the bulls in Spain- I said you and your step-dad can, while I sit along the road at a Tapas bar, sipping on some good Rioja while munching on Jamon Iberico de bellota and olives.

I decided to get a head start on feeding hubby my own version of Tapas, just in case he does not recover from the bull run. My son, well he can out run his step-dad.

There are so many versions of the 'Tapas' definition- what is commonly known in our countries restaurant circles, 'small plates'. Spanish history is in dispute about how it started and the 'tapas' meaning; it is said bread was put on 'top of'' glasses or meats to keep swarming flies away (I know, appetizing right?)- as clever bartenders discovered that salty ham spurred beverage sales, the delicious tradition of hot, warm, and cold tapas was born. (Tapas literally means 'on top' or 'lid')

Another theory is the Spanish will not drink without a small nibble along side their wine throughout the day brought on this trend. I have experienced the French, Spanish, and Italians have a late afternoon snack and wine before they have a late dinner, so this also makes sense.

Seafood is the favorite food of Spainards. When it is brought in fresh off the boats; it is immediately rushed out to all parts of the country: markets and restaurants (Discovering Spain, 2008)-

Scallops picked up in the morning were put in a brine of dry sherry (Lustau- Solera Reserva, Dry Amontillado, Los Arcos), sugar, and its own sea water. Left in fridge all day- then seared in butter. Deglaze pan with scallop brine, reduce and spoon over scallops and spinach (Pickled button mushrooms another post).

Well, totally off the subject of Tapas- Asian Spinach is offered if you ask the waitress, which I do at Lotus Garden along with my favorite, Hot and Sour Soup. She turned me onto it a year ago. There it was in the Indian market, I was excited to make it myself. Lotus Garden flash frie it in the wok whole. 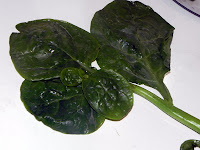 There are four types of spinach often available which include the common spinach, New Zealand spinach, Chinese or Asian Spinach, and Water Spinach. Common spinach has flat thin leaves, thin stalks and a medium green color.

New Zealand spinach is a coarser, thicker leaf with a crinkled-texture. The leaf has an arrowhead shape with a fine fuzz covering the leaf, while the stalk is thicker than common spinach. The New Zealand spinach is best served as a cooked vegetable or ingredient to a food dish, providing a mellow grassy flavor.

Chinese spinach is also referred to as Asian, Bayam, Ceylon, Malabar, Tampala, or Vietnamese spinach, as well as alogvati, mong toi, saan choy, or yin tsoi. This type of spinach provides a crinkle-textured, thicker leaf grown on a denser stalk than common spinach; it is a variety that is commonly grown in Asia and India for both the stalks and the leaf.

When you cook spinach as other vegetables their nutrients will leach out into liquids, so it is best to place them right into the liquid, and then consume. Could this be the reason why the restaurant I enjoy visiting cooks it whole and serves it, wok to table?
Posted by Chef E at Wednesday, June 09, 2010