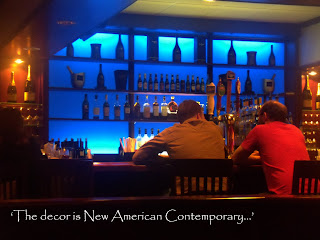 Melissa @ Sable Minded from our group of New Jersey blogs emailed me a few months back, and explained that she was about to graduate from college with a journalism degree and had landed a job near me. Princeton is the home of The Packet, and she would need a place to call home a little closer than her digs south of here. 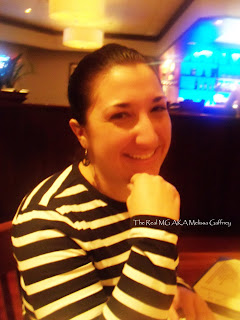 We originally met at a New Jersey Blog Indian Tour months back, and I always like to help when I can. One and one made two, and before you know it we set a date to meet for dinner. She mentioned a friend of hers was the General Manager for a new local restaurant, On The Bone. "Sounds good to me" I wrote in an email response, and we set the date. Friday, dinner at seven o'clock. This place intrigued me, because I also know the hotel manager from the Princeton Corridor Rotary, and he had mentioned the newly owned Double Tree Hotel would be opening a new and trendy eatery in the future. 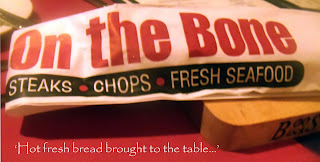 I am with Melissa on the fact that we avoid hotel restaurants like there's no tomorrow. Sure on vacation breakfast can be, well breakfast. Dinner in the hands of a mediocre kitchen with their menu prices, well dangerous. Sure maybe a fifty-fifty chance, but I am not willing to risk my wallet just to see. Melissa knowing the GM, and being friends with the Hotel Manager gave me the push to go check it out.

Walking in the large rust wooden doors screams steak house, but as you enter into the reception area, you feel like you have stepped into an upscale and contemporary restaurant/bar. The decor is not overwhelming, nor boring. The staff was friendly, and willing to get help with any answers they themselves did not know. One lacking part of the experience was the fact the staff had to ask if he bar had any drink specials. I wanted, and asked for a new drink I read about on SippitySup.com, The Aviation. Melissa was up for that, but they lacked one ingredient mentioned when she googled it on her phone. Disappointed I switched to a dirty martini, and her a cosmo. 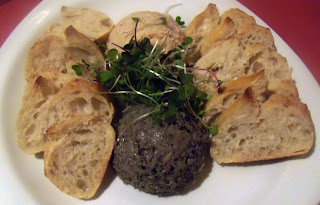 Quickly choosing our appetizers and main courses, we were surprised with a large loaf of hot baguette, and a cinnamon sugar butter. Not great for the waistline, but tasted wonderful.
Melissa and I shared a yummy, and chunky Tuscan Black Bean and White Bean Hummus platter with micro greens, and crostini ($3.50). 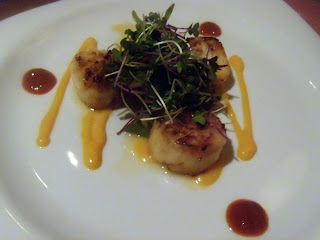 Pan-Seared Diver Scallops with a sweet potato puree ($8)- Tasty, perfectly cooked, and had a red sauce that had a kick that added texture to the sweet scallops, and not a bad price either! 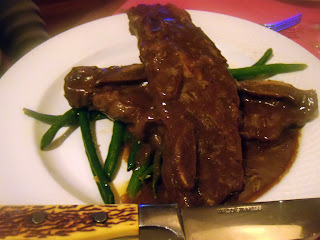 'The knives were huge, and I joked about how dangerous it would be to break up with someone over one of their steak dinners!'

Her main course consisted of the Mojo Beef Short Ribs ($21)- succulent and tender. I had the Bone-In Cowboy Ribeye ($37), Medium, and asked it to be placed on the hot spot of the grill for a charred outside. I knew it would come out more on the medium-rare, but sometimes you have to do that with a bone-in cut to make sure it is not undercooked. 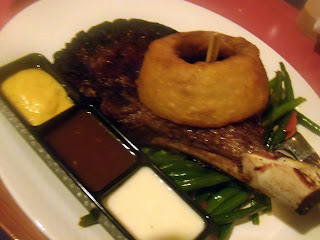 Hubby ordered the All Natural Prime Rib Pork Chop ($22)- Both of ours were perfectly cooked and tender. The all came with a starch and string beans; which were just as tasty! Salads and sides otherwise are ordered, and presented separate on their menu; priced ($3.50 ea). 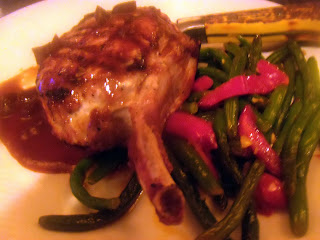 Of course I was the only one that had to take half of my 'gianormous' steak home, but sliced the next day, and thrown over some spinach, red onions, and blue cheese dressing; it made for a great lunch for hubby and I. 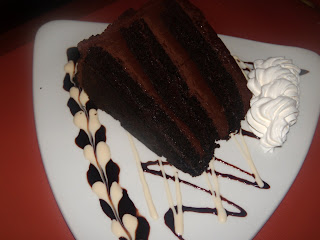 We decided to look at the dessert menu, but was brought out a tray instead. Once again I am leary, as that means dessert is not made on site, but let me tell you... We went with the double chocolate cake route, and between the three of us; it was devoured quickly! 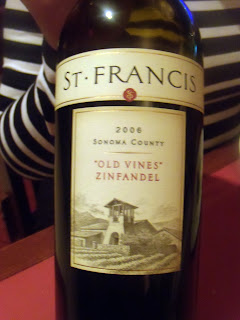 Most all of the food was reasonably priced for the portion size, and our Old Vine Zin ($40) went wonderfully with our meat choices. Two could share a plate, if need be, and the steak was the most expensive item on their menu.

We felt that given another month to work out the kinks of staff training and bar issues, as the kitchen seemed in order; I could see this place making its place on Jersey's top eatery list. Melissa and I decided this would be a great place to meet for drinks in the future, and definitely we would return for dinner!
Posted by Chef E at Monday, June 01, 2009