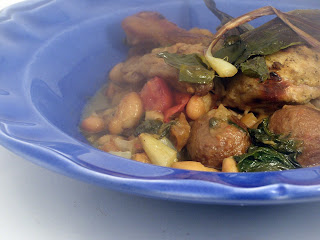 I remember when I first heard the name of this dish, 'Cassoulet'. I was taking french in college, and began watching french movies at the Inwood Theater off Lovers and Inwood. I even named my daughters second cat, a white Persian, Manon from 'Manon Of The Spring'. Even being obsessed with wanting to make this dish, it just never happened. That is why I picked it for today's post. Mindy @ Mindy's Mouthful and I are hosting a German/French Challenge every two weeks. She picks German, I chose the French dishes, and all you have to do is send us a link, and you are in!

Hubby loves duck, so I decided to go that route. I read that this dish origin is not very clear. Some historians say it is an Arab dish, some other says it was created in Castelnaudary during the Hundred Years' war (14-15th Century). The clay pot that this is traditionally cooked in could hint to its origins of being similar to the Moroccan cooking pot, the tagine. The 'cassole' in its design, resembles more of a cone shape, but the idea remains similar. 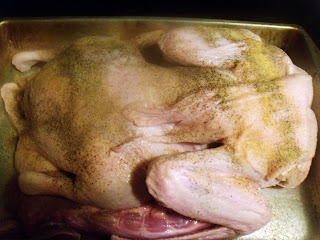 In spite of my camera lens having a smudge; which shows in every photo cooking this dish went smoothly. Taking a whole duck and splitting it down the breast, and placing it back and fat side up I would begin a duck confit early in the afternoon. While the duck is slowly cooking I make some beans. Girlichef's Merlot salt I received will add an interesting flavor to the duck. I will be using the meat and duck fat to cook a few more dishes for my blog this week. My dish is my own interpretation, and there are many varieties of it out there.

I like to stretch ingredients into other dishes when going to so much trouble. Oregano lamb meatballs will be the extra meat in this recipe. I will post the recipe at a later date. This dish has the traditional white beans, but my addition of ramps and fresh grown tomatoes make it my own. Typically this is a pheasant dish, so using duck, and goose liver is an expensive means of making it, but you can use sausage, or even make it vegetarian if you desire. Tuck all the ingredients down in a baking dish; cook until all ingredients have melded. 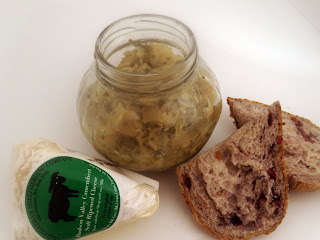 Hubby picked up some Red, White, and Blue loaf at Wegmans for me to make crostini. Camembert along with fresh artichoke spread adds an extra layer, and crisp on the side. The artichoke spread were about three fresh chokes that I steamed, chopped along with some parsley, ramps, EVO, and a splash of Girlichef's Merlot salt. Let it sit overnight to meld. (in the small chopper you can use the inner soft leaves; along with the hearts) 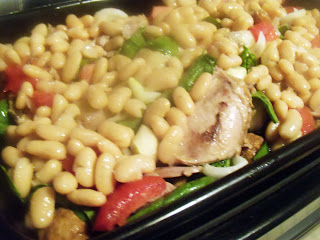 The dish is named after the cassole, the distinctive deep round earthenware pot with slanting sides in which cassoulet is ideally cooked.

Numerous regional variations exist, the best-known being from Castelnaudary, the self-proclaimed "Capital of Cassoulet", Toulouse, and Carcassonne. All are made with white beans (haricots blancs, lingots), duck or goose confit, meat and sausages. In the cassoulet of Toulouse, the meats are pork and mutton, the latter frequently a cold roast shoulder. The Carcassonne version is similar but doubles the portion of mutton and sometimes replaces the duck with partridge. The cassoulet of Castelnaudary uses a duck confit (duck cooked for several hours in its own fat) instead of mutton and serves it in a special dish (the "cassole")

Cassoulet is also sold in France as a commercial product in cans and can be found in supermarkets and grocery stores across the country. These cassoulets vary in price and quality. The cheapest ones contain only beans, tomato sauce, sausages, and bacon — duck and goose are expensive and thus are absent from such preparations. More expensive versions are likely to be cooked with goose fat and to include Toulouse sausages, lamb, goose, or duck confit. 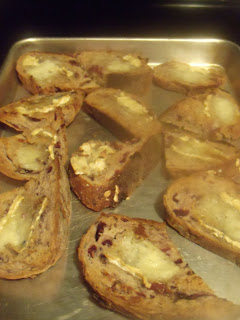 Sam @ My Carolina Kitchens posted her version during February, 'Cassoulet'... 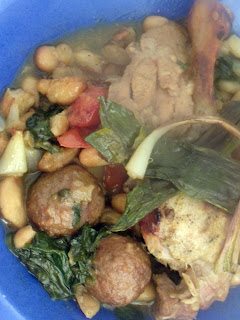 Here is a little email I received shortly after hubby ate the cassoulet...

Thanks for a wonderful meal. I haven’t had cassoulet too many times, but it was better than Lavendou (Preston Road north of Frankford in Dallas) and others I remember.