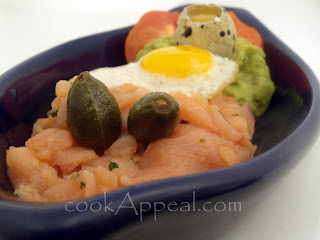 Hubby and I love salmon tartare. So much I made many many pounds of it for our wedding reception years ago, along with a rather large bowl of avocado dip placed in the center for a nice presentation. Since the two of us arrived late to the reception, and we were told the crowd went through the platter in a matter of minutes. The compliments on our buffet went just as well. To make up for not getting his share that night, I make it at least once every couple of months. Sometimes I alternate it with various ceviche, another dish we love!

The recipe I use is always the same, but I wanted to try something different. This time I made a Caperberry Salmon Tartare with ripe avocado dip, and threw in some Quail Eggs for a surprise. Telling hubby we were having seafood, and only handing him a bottle of Neyers Chardonnay made for a perfect date night!

We've enjoyed past vintages of the Carneros regions of this wine. This wine scored 93 Points by the Wine Spectator, and called, among other things, "delicious". We'll settle for that -- anytime, any wine. Neyers Winery makes this wine in the traditional French Oak winemaking practice used for over a century. 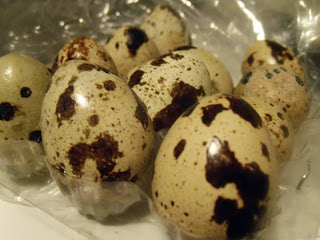 While quail eggs are so small (10-12 g,1 3/8 inches in height), they are packed with many biologically active substances, as they are an abundant source of useful trace elements and vitamins. Their nutritional value is 3-4 times higher than that of chicken eggs. They contain 13% proteins while chicken eggs provide a bit more than 11%. Quail eggs contain 140 μg vitamin B1 compared to 50 μg in chicken eggs, and they contain twice as much vitamins A and B2. They provide five times as much iron and potassium as chicken eggs, and are richer in phosphorus and calcium.

Due to their amazing content, quail eggs are considered as a dietary food. The thing is quail eggs do not have “bad” cholesterol (LDL) and are very rich in “good” (HDL) cholesterol, so even seniors can eat them. Unlike chicken eggs, they do not cause allergy and diathesis. What’s more, they can help fight allergy symptoms due to the ovomucoid protein that is even used in the production of some anti-allergic drugs. Regular consumption of quail eggs may help against many diseases. -Information taken from Genius Cook

I have read that Quail Eggs have been around, and used in Asian medicinal remedies for thousands of years, and many who came into my health food store cafe said it helped with Asthma. There was a period of time when body builders swore by the protein of raw eggs in their diets during the eighties, but not being a medical professional, I can only say that the flavor is richer than regular eggs, and eating a few rather than chicken eggs (many have allergies to chicken eggs) would not hurt. Many people raise Quails to sell and consume the eggs, because they are rather expensive in the market place.

We found fried Quail eggs very tasty, but it took me three before I got the nice one in the photo above.

Taking a small serrated knife and 2/3 of the way up the egg begin to gently tap around as evenly as you can to break away the shell, then at the beginning of the break lightly slice into the egg, and pull away the top shell. This will leave you room to pour out the egg for a shooter, or for placing in medium hot oil and fry for about three minutes. Gently lift from oil and drain on paper towel, and then place on top of your favorite ingredients!

Soft boiled Quail Eggs- Soak your eggs in warm water for a few minutes and clean. Place eggs in a pan, cover with cold water (at least 1" above the eggs). Bring water to a rolling boil before removing from heat. Allow eggs to stand in hot water for 10 minutes. Gently stir them occasionally to prevent the yolk from settling to one side. After they cool again gently tap with knife to remove shell. Serve.

Due to their smaller size, it was pointed out to me they are the perfect portion size! Thanks Doc!

Rinse salmon fillet and pat dry. Cut salmon fillet into small pieces, and place in non-metallic bowl. Drizzle enough olive oil on salmon till pieces become shiny. One squeeze of half lime juice (1 teaspoonful), 1 tablespoon caperberry juice from jar, about 12 smaller caperberries (I smashed a few before adding), sprinkle 1/2 teaspoon of Kala Namek fine sea salt, as well as a pinch of Chinese white fine pepper, and toss. Let sit for about 1/2 hour before serving.

Kala Namek fine sea salt is normally used in Indian dishes, and has a slight eggy smell, but the flavor does not intrude on the flavor of the salmon; it is complimented by the Quail Egg addition.

I read that each Quail have their own unique pattern that appears on the eggs they lay. Can this be true?
Posted by Chef E at Monday, March 08, 2010