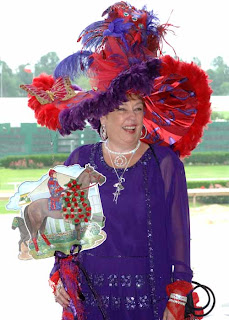 Join blogs around the world in an event put on by CookAppeal, 'Partners In Wine Club' and Fun and Fearless In Beantown- 'Taste Of Kentucky Derby' Party, April 29th, 7 PM.

Haven't you ever wished you could wear one of those hats and be sitting at the Kentucky Derby while sipping on an exotic drink?

Around the Globe- 7 Pm on, April 29th sharing on Twitter will be one big 'Taste of Kentucky Derby' Party dialogue via internet, and blog. This has to be submitted no later than Wednesday, April 28th.
Get creative with this, take it and run your own race to get with the theme of the Kentucky Derby!

Tweeting will take place under the (#-hashtag), #TOKDP (Taste Of Kentucky Derby Party), as well as during the live event on Twitter that night.

So Far We have Parties going in-

Go check out a guest post on 'A Quick Guide to Craft Beer For The Wine Lover' on our Partners In Wine Club E-Zine...
Posted by Chef E at Tuesday, March 23, 2010