In and out of New York City in the past week has allowed me to eat at a few really good restaurants. Momofuku, and Gina la Fornarina really made an impression on me! Hubby coming home from a business trip with a free loading bug has me grateful I did eat out. No cooking going on here this past weekend, so its back to the memories, and lets just say one was 'Momofuku-gasmic'! 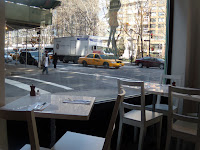 Gina la Fornarina, a Milanese influenced eatery off  279 Amsterdam Avenue @ 73 Street (two locations)Partners In Wine Club was so nice for the early lunch meeting had in the city last week with Iron Horse Vineyards- Kim recommended a few things to share. She frequents Gina's, and ordered for us: 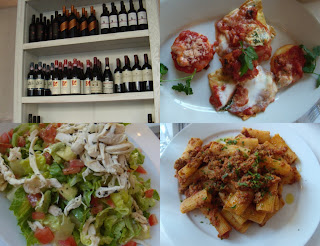 The food and company was fantastic, as well as the walk around the area before we headed back to NJ! 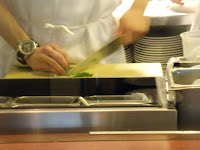 Now in the same, well, weekend I met up with some fellow poetry blogs in the city for The Rainbow Book Fair at City University of NYC, and there was no dinner 'set in stone' plans. Now and then, hubby and I play it by ear, but usually he does have an agenda. His job in this relationship- to keep me up on the trendy places popping up in New York City. Evidently there is one place that has been open for the past year; it is very hard to get reservations for if you do not make them the Tuesday before you want to go, 10 AM on the dot, for that following Saturday, if you are lucky... 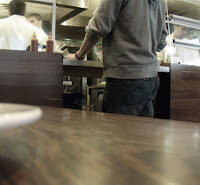 We were not so lucky, but Momofuku (means 'lucky peach') has an alternative, and pretty much the same menu (if you want the 'Fried Chicken Dinner' you call ahead, lol, if you know me- you understand). Momofuku Noodle House and Milkbar right next door, 207 2nd Avenue, East Village.

You just have to be at their door before, or 5 PM on the dot, because the line is long, and it stays packed. After a year? That must be good. We were first this past Saturday. As soon as the book fair was over we hopped on the subway and headed there.

The one attraction to the place, Steamed 'Pork Buns'. Something I have wanted to try for a while. Pigpigscorner, and Selba write about them, and other great Asian foods. Honestly they look tasty! I am all about some good pig and beef when it comes to BBQ. Smoked, grilled, or oven roasted- its all about the flavor and sauce; unless you are smoke sensitive, then I would stay away from the barbecue scene. 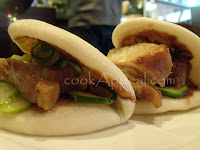 Back to the DELICIOUS food- Well, I have to also mention the table they did not want to seat us at, I believe because many do not want to sit by the kitchen. This was open stadium kitchen viewing, but with plexi-glass about two feet up. Right away we said we would love to sit there. Can you guess why? Part of the entertainment for me. The smells however, do hit you like a ton of bricks, and there was an issue with Spanish Mackerel at the end.

Here is what we ordered, and lets just say...'Momofuku-gasmic' barely touches the surface of this wonderful meal. I even had a birch beer as part of our dessert! 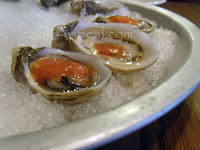 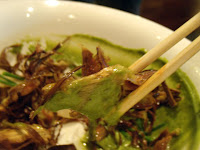 Seasonal- Fried Baby Artichokes /w pistachio, sunchokes, bottarga
(a hint of spiciness to all of this, but not overwhelming, just builds slowly, and a good thing for my taste buds!) 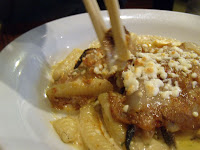 Offal- (Hubby's meal, I did not touch this!) Cavatelli- pigs head
Dessert- Queen Anne Stilton- pear sorbet, pickled pears, pumpkin ganache (to die for!)
Birch Beer- by the can

More on the wines over at 'Partners In Wine Club', 'Momofuku-gasmic' review...

I also brought home some Kimchi Butter from Milkbar next door, and will share what I did next- 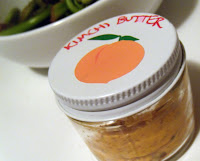 Disclaimer- The title is my own interpretation, Momofuku means 'lucky peach'...
Posted by Chef E at Tuesday, March 30, 2010